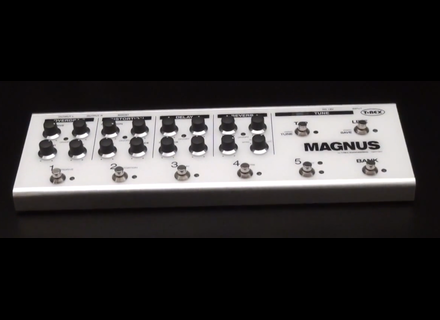 The pedal is finished, it's clean, no frills.
Everything is in its place.
It is easy to use, no need to delve into a manual to learn how to use it (this is the advantage of having presented the trick in the form of five pedals side by side).

However the tuner is not accurate. He will repeat the job in and live, but the studio is better to keep a real tuner in the elbow.

Then, the bottom knobs are quite close switches ... And suddenly it happens frequently screw up a setting for a change in ... will have to be careful.

Overdrive: with distortion, it is the two effects I expected to turn to see if this thing would suit me or not. The OD is excellent. Typed but versatile enough with the final Blend knob that allows you to mix the input and the sound of the OD signal. By putting it in the middle, a rich, detailed and dynamic OD is obtained. I love it.

The distortion: it is also excellent. Just a continuation of the OD for the grain, but it is fatter, fuzzy limit. So it's a little gum shades game, it not bleed badly. It is the opposite of an example Suhr Riot. on the other hand it has a sacred character, and I love, it will do well for what I played in groups (rock at large, in short).

The delay: I am not a connoisseur of delays, I use it mainly to give depth to my solos. And this one works very well. Not invasive, relatively transparent, but not without much personality. Difficult to describe, in fact!

Reverb: ditto, this is not an invasive reverb, whatever the selected type. It fits perfectly with what I wanted, because as like a sound engineer I know "good reverb is a reverb that is not entent." But lacks when it is not there

The boost: bah, it's a boost at the end of the chain, and it works well. Is adjustable via a swiveling knob on the rear side of the device. It at least avoids that knob there is disrupted by a kick misplaced ...

Overall, I can remove the doubt permanently: it does not sound digital at all, despite what the price of Chinese origin could have fear! It's really very good.
T-rex has opted to include in this pedal rather typed effects (for OD and distortion), which is still pretty ballsy because it does not appeal to everyone.

However, for one who plays tricks rather typed rock, which needs these five effects, can independently assign presets ... it is the Holy Grail.
Now I can do without my heavy and bulky pedalboard!

However, we regret that the settings are not stored too ... perhaps a V2?