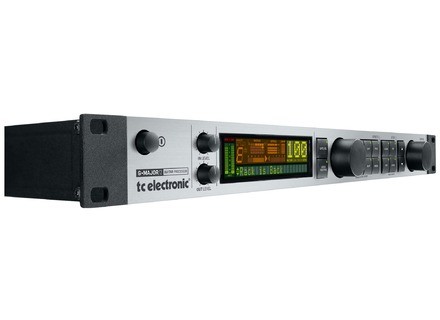 G-Major 2, Multi-Effects for Electric Guitar from TC Electronic in the G-Major series.

It includes 100 factory presets as well as a user bank were you can save your own presets (up too 100). These presets can be programmed manually using the front panel of the G major, or with PC/Mac editing software.

It can be midi controlled, and it has relay switching so you can control preamps that aren't midi programmable.

This unit has two balanced analog inputs and outputs.

This unit is rack mountable.

Setting up your own patches is pretty straight forward so I never used the PC editor.

Anything you need to know about the setup can be found in the manual, its really helpful.

This unit is specifically designed for guitarists. Seriously, the effects sound amazing. They're crystal clear and pristine. I've yet to hear better effects outside of a studio. This is an amazing unit.

The bypass didn't color my tone at all.

I honestly can't find anything to complain about the sounds. If anything it sounds too good, meaning it can't really nail a lowfi delay type tone. But thats not what it was designed for. It was designed to deliver studio quality effect through the effects loop of a guitar amp, and it does just that.

The only reason I sold this is because I had trouble programming the midi controller I bought. I didn't have the correct hardware, and live this unit is borderline useless without a controller. If it hadn't been for that I'd still own the unit. I plan to buy another in the future.

If I had to complain about on thing I'd have to say its the price point. At nearly $600 new its pretty steep. However, if you buy used its much more reasonable.

-Insane palette of digital effects, from your usual chorus and delay, to numerous other outrageous sounds
-Sturdier front panel design
-1 space rack mount design
-¼” stereo ins and outs
-Digital ins and outs via SPDIF
-MIDI in, out, and thru
-Computer editing of effects / backup
-Switching of anything via ¼” latching (ex: amp channel switching)

T.C.’s manual is very detailed, and decently clear. Some features take a few reads to fully understand, but previous experience with other processors makes it easy work. For on the fly editing, the buttons controlling the status of individual effects is a great feature. For more detailed editing, the PC editor is amazing! Seeing all the details and options on a bigger screen makes editing your patches much simpler. After programmed, switching via MIDI is effortless, and control of parameters via expression pedals is also available.

T.C. has been well known for their delays, reverb, and chorus for many years now, and for good reason. The G major 2 includes all the usual effects you would expect, plus some that were not previously included, such as univibe, and the pitch shifting algorithms found in the much more expensive G-System. This in itself is worth the price of admission. All the effects sound very clean and pristine, and there is little to no coloration of the original tone with my amplifier (a Boogie Mark IV). To get the most out of each and every effect, it is recommended that this unit be run in a series effects loop. For effects like Tremelo, whammy, etc., this is a must!

Whether you are a sporadic effects user that wants to maintain their original tone, and sprinkle in some extra every once in a while, or seeking heavily processed and modified sounds, the G Major 2 has what you are looking for. With the vast amounts of quality effects it offers, it is a no brainer, even more so in its price range. The shortcomings of the original model are gone, making it a very reliable and powerful processor.

jip96's review (This content has been automatically translated from French)

TC Electronic G-Major 2
5
Did you find this review helpful?yesno
»

Are they edited? Via a Mac / PC editor?
Each effect can be edited via PC / Mac or directly on the device

What technology is used?
Digital

What is the connection?
MIDI IN, OUT and THRU, input and output mono or stereo

The general configuration is it simple?
Well, we still have a little time to configure, including global and MIDI settings when you are not too familiar in there (which was my case with purchase).
But using manual rather well on this side after some settings requires some tests in the preamp or amp head used (parallel effects loop or in series in particular)

Editing sounds and effects is it easy?
Yes, very simple!
Just go to the section that contains the effect changed and after simply circulate in the menu and change each setting with the small wheel and then it only remains to record by pressing 2 times the button store, so very simple.

The effects are they effective, responsive and realistic enough?
On this side I have not had to complain, very good digital effects including reverb everything, delay, modulation.

Which instruments do you use?
I use an ESP Horizon III, an Ibanez RG and Sebaston.
The G Major is plugged into the effects loop of an ENGL Invader

Which ones do you prefer, you hate?
There are no effects that I did not like but I'm pretty happy with the reverb, delay and modulation.
The also appreciate the Noise Gate, EQ and compressor that I use on many presets.

How long have you use it?
I use it for more than a year

Have you tried many other models before buying it?
Not, in any case there was no real equivalent in this price range except for a rack rack effect Rocktron has not really good press

What is the particular feature you like best and least?
The editing via PC, because it takes a midi / usb cable and coincidentally that I took did not work with the G Major II ... (some MIDI / USB cable apparently compatible)
I do not understand that TC Electronic has not had the presence of mind to a direct USB connection ...

How would you rate the quality / price?
Very good! Allows for full editable quality effects that can be controlled via midi.

With experience, you do again this choice?
Certainly, unless a new version came out

Did you find this review helpful?yesno
»
Read the 7 user reviews on the TC Electronic G-Major 2 »

Published on 02/12/13
It's Metallica Month at TC Electronic and the brand celebrates it with a special offer on the G-Major 2 guitar multi-effects.