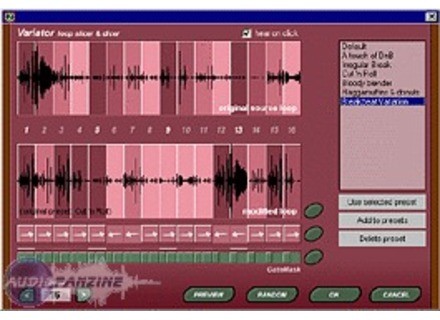 All user reviews for the Ruismaker Tuareg 2.5 [Freeware]

Trblft's review (This content has been automatically translated from French)

Ruismaker Tuareg 2.5 [Freeware]
5
As said below, installation can not be easier, works without problem with a chipset's all rotten or card creamware, the ballad.
configuration poses no problem, in fact there's nothing rgler.
for the manual, well not need, in 1 hour I capture all, there's even when the subtleties in the fawn to tie the loops appeared to me much space to beginners but in fact it is enough to get into the logic of the prog, nothing to do with fruity loops for example.
even when it is very easy and effective immediately.
difficult to do more than simply remove features and fall on a toy. amrit on 10 serious.

I test under Win XP, Win 98SE, on a sound chip, creamware powersampler on a map, with 1GB of RAM, with 64MB of RAM, a Pentium IV and Athlon XP 3000 +, etc ... and not a problem on the horizon, not a crash.
it's really good when you have an old config that is no longer the IDAL to make Zique loops on an old PC RCup '.
for performance, I would say that with the VSTseq plugin, you can really get good stuff trs is limited when the same composition but it's awfully good.
It is better to have when even the paid version, but hey, $ 35 is nothing to what this prog does, especially since this money in the small t rinvesti ERRF Tunafish.

I use it with an art project in lves of computer music, we just started but they come in very easy, for my part I am surprised to have a Russian with stuff close to what I do with FLStudio (ct only good samples and VSTi sr) and I think with other complmentaires software (Audacity, Kristal Audio Engine, asio for all, sample catalog) can be cr er the bote tools zicos broke.
What I love is all small dtails not found on other freeware (read self samples, shuffle, management of the fade-in fade out directly on the squenceur, audio editor Size Sense basic beat slicer, etc.).
I take my hat Bram Bos, the crateur, who takes the time our answer to the users personally, that made me a group rate $ 35 to install on every PC in my collge ( it's a discount!) and in addition it has not endromi pusiqu'il dveloppe a tool Tunafish terrible happens maturit srement is essential to deal with the VSTi. Bram Bos long life!
Did you find this review helpful?yesno

jchet's review (This content has been automatically translated from French)

Ruismaker Tuareg 2.5 [Freeware]
5
Installation simple and clean: the software is an executable and does not bring disorder in the system folder. Significant.
In seconds, you're already working on your first loop. Friendly interface and easy to understand.
To take over the software more systematically, there are books available on the website http://www.brambos.com, including the Tao of You in French.

I have an AMD Athlon 500 Mhz, 64 MB RAM with a Soundblaster Platinum sound card and it works well (that's how the software is not too greedy). That said, I remember having problems in the Song mode when the number of patterns and tracks used increased. I think the author has changed since those few bugs.
In addition, the registered version allows the use of Tuareg different plug-ins, especially VST effects. If the intention is laudable, the use is not always very stable (as is often the case with the VST). However, overall, it works well.

I use Tuareg recent years, mainly to work on loops then I export to other sequencing software (Cubase, Live).
I find the function VARIATOR, which cuts your loop into slices that you can reorder, astounding! I do not know other programs that do this. Just for this feature, Tuareg is really great. Only caveat, the Song mode.
I bought the full version ($ 35) and it's worth it. Besides the fact that there are some add-ins and more, it's cool to support a developer who did a good job. Also, whenever I had questions or problems, I confronted him and each time I answered.
An excellent software for beginners as well as for more experienced musicians.
Did you find this review helpful?yesno

Ruismaker Tuareg 2.5 [Freeware]
5
Installation could not be more simple, just download and click on the executable, the app is launched directly.
manual will tell! No need almost.
The app works almost full freeware mode (the function that m'intresse walking freeware: the VARIATOR). The license s'lve $ 30 otherwise.

This is a "small" music software has to run on a 500MHz or less same.

[note, this software is terrible to get loops (a little square that's right) and full of variations in minimum time.]

We create a loop in the bar with samples or those provided VARIATOR is opened and he took the slices alone (although it does achement).
(Look at the picture above)
Top: the original file
bottom: our future variation

To create a variation by clicking on the edges and the dplacer as you like, you can choose the direction of reading and a trigger for every gate.
there is a button to randomize gnrer random image changes.

For a freeware it's a killing, I may go: better than Recycle.

Apart from the excellent "loop mode" the software consists of a bar, a synth and a squenceur, if there's achte of synths and effects and more.

I also possde Recycle and frankly since I Tuareg (15 days) I have not yet opened Recycle
Given the price of Recycle and free of it I do it again though Obviously this choice.

I put him anywhere because of its 10 gratuitdu loop mode, and easy installation.
Did you find this review helpful?yesno
Cookies help us improve performance, enhance user experience and deliver our services. By using our services, you agree to our use of cookies. Find out more.