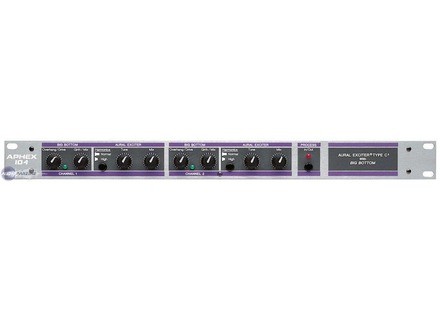 patlebarbare's review (This content has been automatically translated from French)

In-channel, 4 potentiomtres, and a switch normal / high ... are not also to reflect two hours to understand the buttons ...
Big-bottom: a knob for the harmonic ratio, one for the mix (dry wet), ditto for the treble
ah, yes, the device is intended to be used to insert ... o the dry / wet, but we can play very well, using it on a group ...
I did not have the manual, it is easily accessible on the Internet. And easy to understand

I use the Aural Exciter (with Big Bottom, the name is enough to be underlined drle for about a year. I must admit that I mostly dpart found a bone case on ebay U.S. and availing oneself of the fact that a device Aphex seducing me well. So bang, I cracked ...
It took some time (necessarly) find how to use it. I work almost exclusively in PA. Has the revelations during a concert Vocals / Acoustic Guitar.
Silent guitar not terrible, not very good balance, and in these cases we found the fit the low-cut up what was not drooling over the PARG. And suddenly we find ourselves with highs that are "Zwinger Zwinger" ... not very pretty. So I try the Aural Exciter (which I put on a stereo group), making the game work pretty big bottom, and the miracle ... having a fair shot the PARG guitar on the edge, you get a re-CRER PARG certainly artificial, but so much more specific on, and suddenly, you can m I release the low-cut ... Then, to correctly dose ils'agit rate highs, but overall the effect is quite elegant (I tend to adore the dbx160XT on acoustic guitars, for the precision that Ramna it in the middle of a live mix) ... Caution, however, for a year and some three dozen different acoustic guitars, it also does not work on all ...
But the other surprise is that on voice, on a system that lacks some precision in the center (typically, it seems to hear the voices, sound level, but never A veritable reach the location), it is also magical.

Sr Although the effect is less sensational than Distressor prampli or good, but considering the price, a solution is elegant and qualitprix the report is strongly in favor of the Aural Exciter .
But be careful not to overload it, I noticed that saturates relatively quickly (and as it is a gnrateur harmonics, we quickly see what kind of effect). It's a bit spcial, but on the console on which I work most often (ATI Paragon II), the assignment is a group with an identical potentiomtre dpart auxiliary is pus practice for metering

So, I use it for a year
I like the precision that Ramna and the PARG DEFINITIONS.
Like the impression that the less saturated fairly quickly.
Very good report qualitprix
If it broke, I would try to find one!