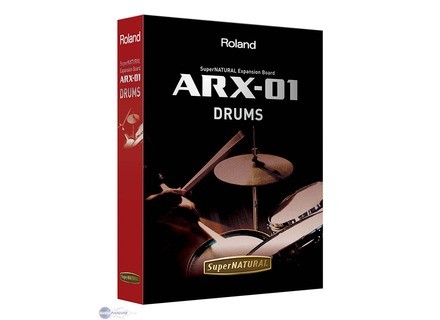 ARX-01 Drums, Expansion Board for Electronic Instrument from Roland in the ARX series.

Dub Tom's review (This content has been automatically translated from French)

Roland ARX-01 Drums
5
The Fantom G has already about 600 waveforms drums and percussion. So the intrt add an expansion card based on the drum is not empty. Now if the cards and SRX SRJV that only served to increase the ROM, maps and more ARX have their own sound engine and GUI dedicates.

Visually, the ARX-01 inherits the design of Fantom and allows, for example, view The elements of battery fawn DAO. Ergonomics is the spirit BAR, with little Settings, but that act directly on the sound, ie simple (compared synthse of the workstations) and efficient.

The musical approach is intended to GPs (technology SuperNATURAL). In fact the waveforms are list it by type, size, style or matriau (eg MPL JZ 14x6 SD-h-cort XStick), and are on offer rglages tuning, depth was ... (kick, snare, tom) or the size and sustain (hi-hat, ride, cymbal). The rendering is not comparable with a soft Speciality battery, but the acoustic drums sound better than the Fantom. By the Electrical cons do not believe me (though Roland should crush the competition on this l.

L o it gets really intressant is in production. Indeed each of the 24 tones of a drumkit has a compressor and a 2-band EQ (low / high) semi parameters. The card also offers a more MFX Rverbe (the same as the MC-808, so a selection from those of the Fantom). At the mixer, it has a table 24 tracks (one for each tone), with the standard (level fader, pan, rgb send, EQ, hi / lo ...). In addition it is possible to assign 8 groups of tones (his choice) to 8 faders for mixing Fantom faster.

This card is not a revolution, but it has the technological revolution of the Fantom (screen, power) and provides more rel to give relief patterns from acoustic drums.

I never saw him because I pass the Fantom G M3, but it is an option I'm missing.