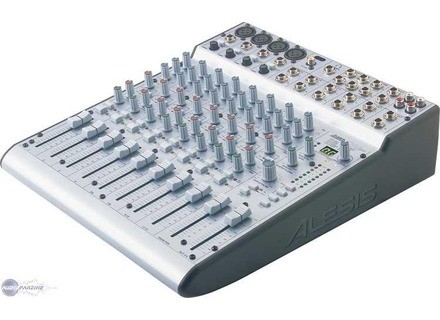 Multimix 12 USB, FireWire/USB/mLan Mixer from Alesis in the MultiMix series.

kyuss rock's review (This content has been automatically translated from French)

OF USE very simple, and the manual born to aster clearer

Transparent, produces no noise or of her breath, equalization is efiquace but a little too simple

6 months
it takes place is very, ideal for my small space restrein.j 'I try some other digital model, far too complicated to use and edit the sound too much (for similar instrument) so an analogue console was a better choice for me, and the price alesis RAPORT quality is very impressive!
Did you find this review helpful?yesno
»

metrix's review (This content has been automatically translated from French)

Standard features for this type of mixer, the USB connection is a plus. The compactness is remarkable.
Effects of good quality, in fact only 9 types really DIFFERENT.

Getting started empty, only the references and assignment monitoring require little attention.
Connection top practice, good connectors qualit.La rglage range of the gain is large and trs button (small) potentimtres preset handle with finger!
All basic functions for a table of this type are available.
Race trsrgulire faders and enjoyable.

The USB connection is really great: ds connection works (no problem for drivers) and back without noticeable latency.
Manuel trs full, especially with schmas block if you want to get into the dtail.

Quality of pramplis, including background noise (dynamic microphones used on very sensitive) excellent!
Especially the overall sound quality is good trs: clarity and precision, test records and ropes woman's voice.
Effective qualiseurs = OK without, but at least do not introduce same breath by pushing a little treble.
Note also a good dynamic gnrale Reserved: no noticeable saturation, even the VU meter output compltement in the red.

Used for 6 months, mainly in home studio recording and a little collection outdoor (2 times)
I really apprci 1 / transparency of sound and the quality of pramplis, 2 / 3 the compactness / output USB
Before that I was carrying all the MODEL-making gear for his classic collection outdoor, MutimixUSB and now with my laptop under his arm was enough!
The weak point .. the somewhat fragile potentiomtres some (including effects) it is better being protected properly if it is carrying.

Report qualitprix among the best (from what I know).
I Rasht even in the greatest!
Did you find this review helpful?yesno
»

Dj Evol's review (This content has been automatically translated from French)

Alesis Multimix 12 USB
5
Very good food, little encombrate trs, trs pratque what is with that is that it is easy to make trnsporte recording.
10 + tracks in through the usb through a computer.
effects Intgr trs good for mics

The instalation of a silent cubase a bit laborious but otherwise all is well
I use it mostly to record my remix by entering with my dj table.
The sound is Nikl, nothing to say
For there is a little against prblme with qualiseurs that are too close for my liking.
From a cot that is normal because it is handy and trs effects saturate quickly if we want to s' to good use on low (at the same time they are not for prvu).

For now the sound seems to me clear

What is the price! 270euro, I have no regrets because the quality of alesis there.
It is a marvel to me

iknoy's review (This content has been automatically translated from French)

For my part I only had problems with this console:
APRS-4months use the master fader and 3 or 4-way fader DCON mutes etc ... (such as sending the right cot's)
So back to the store to look at the beast and who see nothing wrong with the test but APRS kidding toujour thus refers specifically to alesis! APRS and wait 1 month! I like the conclusion with reference (perfect working order ) Test at the vendor's works! yay!
his walk back home more ! So now I walk only with Alt3 / 4 right but his pass for effects and recording usb c death

Parlon in that famous usb connection! I never managed to make it work with cubase! with SoundForge, but less than c 100fois possible so voila super ..

against the digital out from nothing to say and listen to c clean and WORKS! (Pfiou finally something that works on this machine ...)

since I listened more difficult to come down the ladder!

- How long have you use it?
for 2 years (for lack of penny penny)

- Have you tried many other models before acqurir?
before but not since, yes!

- How do you report qualitprix?
260euros bought about bin full of features are ok but not work so I qualify for this award has an EPM8 soundcraft or MG16 / 4 Yamaha (the bulk and the sound is too!)

- With the exprience, you do again this choice? ...
nan's wrong? ELSEWHERE adios to my disgust that console alesis ('ll admit that I came across the dark because bte given the further notice ...)
My choice will therefore focus on the SC or Yam
Did you find this review helpful?yesno
»