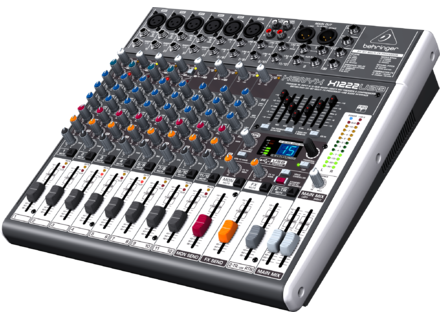 Xenyx X1222USB, FireWire/USB/mLan Mixer from Behringer in the Xenyx series.

renaud.gimenez's review (This content has been automatically translated from French)" console conference or troubleshooting"

Behringer Xenyx X1222USB
everything is on the manufacturer's website

test concert theater conference and voice recordings.
48v power supply-often used = perditions sound on recording via USB
Xps-worthy to be cut permanently (buy a 5.1 speaker hi-fi at the same leclerc taken and the result is better)
-DO NOT EXCEED 20 ° c for use of USB interface after which the breath is permanent without exceeding 0dB.

48v power supply-often used = perditions sound on recording via USB
Xps-worthy to be cut permanently (buy a 5.1 speaker hi-fi at the same leclerc taken and the result is better)
-DO NOT EXCEED 20 ° c for use of USB interface after which the breath is permanent without exceeding 0dB.

personal use only. nothing else possible ...
I now use a vlz SR24 4.
nothing to do for another use

Yjanet's review (This content has been automatically translated from French)" There is the coffee that she does not ..."

USB interface for the game, we stopped at two tracks in Master and 16bits/48k (check)

The architecture is a bit strange and I have not yet fully understood on the internal routing but I come back ...

3-band equalizer on each slice, 7 bands on the master output / Monitoring

An effects section is integrated with three independent elements:
- Processor stereo assignable to main mix
- Assignable effects processor for each standard on a bus that is fed back effects master
- Processor "vocal removal" on stereo tracks
- A compressor for every single

On paper, everything seemed simple, but once you start trying to understand how signals are routed, everything becomes complicated.

According to the tranche selected, routing different and unlike my old Eurorack MX2004, I lack the features such as PFL / Solo on the control-room

Ergonomics access effects engine is seriously reviewing frustrating but after a few tries, it works better ...

When lighting console, I feared having to return it directly because of "beeps" were present on the headphone ... then after watching a bit and cut effects processor in the main mix (nothing to inject), everything started to get better ... much better ...

The headphone amplifier contains the breath I do not find in the records on the computer then, phew, but sometimes it's tiring.

Unlike other reviews, the compressors are highly usable and compensate for a lack studiste a home on a shoestring budget.
The equalizer output is quite "violent" so use sparingly.

I have not tested the function of détectaion feedback built into the equalizer output since I have not done live with this console.

I use this mixer for 2 days.

I used several years various consoles, from the same brand that I met on the whole, and also other brands (Yamaha, Mackie, Alesis, soundcraft) with different aspects and I was less convinced, needing a simple audio interface but allowing me to make some decision at home, I opted for the simplicity.

I really appreciate the all-integrated and its immediate recognition Linux sister, but I regret the loss of ergonomics, the absence of PFL, the solo and the selection of sources for output monitoring.

The value is correct, given the plethora of integrated tools. I'm not sure the same choice again if the occasion re-presented. I wanted to start taking the X1204USB who was out and I turned on it to get it faster.
Did you find this review helpful?yesno
»

The sound is clear, the console does not blow.

I use it for a week.

I had a Mackie VLZ and a Yamaha 01V96 numrique. I have a soundcraft 24 I also have a studio with a converter numrique 16in 16out console and Scope Fusion pro.

I wanted a console not CHRE with Intgr effects that may sound to small scnes quickly to training from 2 to 4 players (without drums) with two returns management and equalization same summary the faade. No lugging a rack!

I read here that some were not the diffrence between the 15 effects of this console. I would say that in this case, it is better to arrter sound. Because the effects are clean, know that in 2011, any manufacturer can offer 24 bit quality effects because the algorithms and components have banaliss. Here Berhinger does not default, and the multi-effect does its job properly trs if we do not believe only worthy Abbey Road! Here, we speak of a console 170 euros!

The faade is little equalization of prcise. The compressors are pr-rgls a little more useful, trs similar to Yamaha MG MODEL (a friend has).
Dtecteur function of feedback is useful if you work with amateurs who inevitably will stick their microphones in the faade.

The report quality price is unbeatable, except for the snobs who will not want his dpenser so little.

I made this choice by reading the generally positive view trs Xenyx range, knowing that the components and design are the same console each other, I chose this MODEL silent because it best suited my request.

I would do without this choice hsiter.

JuSpades's review (This content has been automatically translated from French)"For once I say yes to Behringer!"

Behringer Xenyx X1222USB
3
Guitarist for almost 10, Behringer makes me obviously a crucifix out whenever I hear about this brand. Yet when I wanted my little station installed at home to work a little at home when leaving the studio I tried the shot and honestly at this price, for once Behringer assured! Beware of scam or the error you have to know what was in the hands: no multitrack recording with that is an analog console that was glued 2 converters! (Ie even if you have a microphone on each entry you will not have 8 tracks but on the DAW, or two if you use the stereo.) I say this because many are beginning this fact have this way. But if you&#39;re not a beginner and a little DIY for this ridiculous price they can release a pro-quality recording with no problem! (Eg I do my drum mix on the table before taking and low DI + Mic and guitar tracks, the tracks and voice ... we are well within the rere anyway!) No latency problem , provided they are well equipped to side.

As I said there must be a little resourceful but quickly finds functions that are not supposed to be there in a little groping. Anyway the manual is not one and the names of functions on the table sometimes a little wobbly! I said well above and I would conclude the same way lower but we still talk of these 80 faults and all the problems it will ask you!

Here we go! If its like the Yamaha frangine (magic I think) it had merely USB table "classic" and converters that would have been impeccable! But he had to do Behringer zeal in wanting to offer a complete product with features unusable as the effects processor or compressors. The compressor is present on the first 4 entries in the form of a knob round clip and an LED clipping. Therefore no adjustment threshold, ratio ... we asked not only as it will just be taken as the preset containing the attack and the compressor might have been used! So when used one has the right to a huge peak before it goes off ... making it completely unusable. The effects processor to look cute in appearance and offers 5 reverb, delay, chorus, flanger ... except that these effects are 15 looks like 15 drops of water and its really yucky! Good effects analog purist when it comes to guitar, not only to rethink these "effects" I have chills boo! So as for the compressor: OFF! 3 eq parametric slice (low, mid, high) and a band eq "General". They are fairly accurate and reliable. If the table has not yet set to blow you can easily remove a feedback or a blast with the eq band or just a colorful little slice of the plug with parametric. (Although it is relatively transparent.) Behringer And when he corrected the problem persists then? The breath Jove! Between 18 and 20 ° in the control room can be expected to use half past one before it does not blow. If it&#39;s 23 or 24 per cons, simply reading a flattened and bim it blows! Fortunately it simply type in your speakers or headphones and it does not appear on the runway. Anyway even if "we made it" and we are working with, over time, it is always difficult to explain to a zicos making a decision like that is why it blows in his headphone! Despite all the console remains transparent and sounds very good returns in terms of being well-equipped side. Me as a rack I use very good plug-ins in Nuendo and I have a fleet of quality mic. Believe it or not it makes a farce! Of course it does not try to do live with eh! Between the blast and the problems mentioned above it is not even worth it! (In addition to connection problems for some things.)

So as I said above with good zicos, good beats, good microphones, good site and good monitor can make a good bridge conditions to master the techniques of sound and learn to work with its flaws. It is therefore not recommended for beginners who quickly become demoralized, but for someone like me who just wants a little station next to the studio, it is an alternative! At this price it honestly was not even one of the processors in the rack, a good mic or a nearfield quality so why not try? Better to invest in good speakers in other things for example. The quality / price? Okay so we know what we do, otherwise it borders on scam is true. Is what I would do this election? No of course it was a little test and I was not disappointed though. Since I am a true multi-ironed but if I had to return to the time of purchase I would try the shot with his sis Yamaha (magic stick) which should be 100 € more. If I were advising a table of this type I would say that for 100 € more than the Yamaha should be much better! No unnecessary processor and a better reputation, to see.