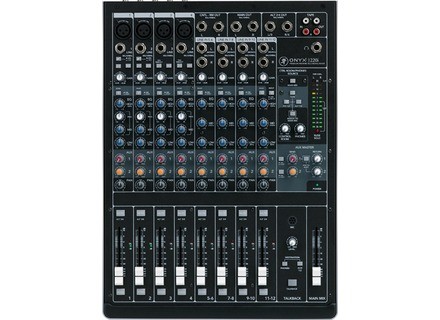 Onyx 1220i, FireWire/USB/mLan Mixer from Mackie in the Onyx-i series.

Mackie Onyx 1220i
4
The Mackie Onyx Series 1220i is a 12 channel hybrid analog mixer and firewire based audio interface. The 1220i combines the analog mixer expertise that Mackie has accumulated, and pairs it with the digital audio work of computers. You can use it with just about any software, including Pro Tools M-Powered. The mixer itself has four mono channels with microphone preampilifiers, and then has four stereo channels with only 1/4" connections. Each channel has a fader and a three band parametric equalizer. They also have a pan knob and two auxiliary ones as well. The 1220i also has 1/4" monitor outputs, RCA tape outputs, a talkback section, an auxiliary master control section, and a 1/4" headphone jack and controllers. In the back it has four 1/4" inserts, two auxiliary sends, and two channels of returns. It also has XLR outputs for your main monitors in the back, and two separate firewire ports. Automation isn't supported with the Mackie Onyx Series 1220i as far as I know.

If you have experience with basic analog mixers, the Mackie Onyx Series 1220i won't present any problems for you as everything is standard and straight forward. Even if you're a beginner, I'd recommend having the manual around and doing some research on analog mixers to get yourself familiar with the basic features of analog mixers, and you should be all set...

The sound of the Mackie Onyx Series 1220i is overall quite clean sounding. The mic preamps are pretty much what I would expect from a Mackie mixer, which is clean but nothing to scream and shout about. They will definitely get the job done in most situations, especially for those who are using this as an all in one solution for home recording, which is what most people will be doing anyway. The equalizers are actually pretty good sounding, better than older Mackie mixers in my opinion...

For those who are looking to get into digital recording, but want an analog mixer to work with, the Mackie Onyx Series 1220i is perfect for you. The 1220i provides a cheap enough solution for just about anyone looking to jump start their home studio. It is also great that you can now use Mackie Onyx mixers with Pro Tools M-Powered. I'd definitely recommend this for anyone who wants to run Pro Tools M-Powered and wants the feel and features that an analog mixer brings to the table.

Makos's review (This content has been automatically translated from French)" Its place in home studio and maybe more ..."

Mackie Onyx 1220i
4
You will find all features on the website of the brand:

I use the Mackie for some time now. It has its place in my home studio and filled its function "Hub-Audio" brilliantly.
Found with this model quality electronics of the VLZ series, plus routing to the computer by firewire of all entries. Converters are transparent, have a good dynamic.
While I personally have not used outside the studio, I'm sure she will do in the sound and live recording of a small group.
A minor complaint ... midi implementation and the ability to drive even that basic transport functions of a DAW would have been nice. Concurence there have been but after the release of this excellent console.
Good stuff anyway

Published on 06/27/10
Mackie is extending the free download of the driver that connects its popular Onyx-i FireWire Production Mixers with Pro Tools M-Powered 8.