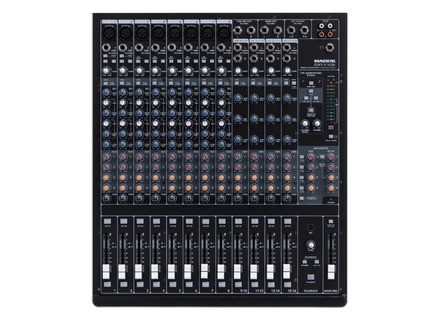 Onyx 1620i, FireWire/USB/mLan Mixer from Mackie in the Onyx-i series.

Mackie Onyx 1620i
1
I work as a hobbyist sound engineer / operator at small-scale theatre, concerts, discoteques.

I was looking for an audio mixer with a multitrack recording possibility. A Mackie Onyx 1620i was chosen, due to its highly recommended pre-amps and equalizers.
Paid $1300 in a shop.

1. Firewire.
It kinda works, when you use it properly. This proper use is never described in any paper - presumably, because all the testing is done on Apple computers. And with regards to Firewire, they work rather different (and more stable) than Windows. The trick here is to:
(1) keep all your music on the same playlist with the sampling rate, and
(2) do not set the mixer as a default audio device (which happens automatically, so you need to set it up as non-default).
If you do not follow this, at some point the mixer changes the sampling frequency, and everything begins to sound abnormal. It happens in all audio programs I tried, including the 'native' Mackie Tracktion 3. The only way to restore this is to reboot the mixer.
And never, never try to run two audio programs simultaneously - this totally screws up the sampling frequency.
There are also two ways of getting the input from the computer - channels 15/16 and control room FW input, routed to the main channel. The volumes of the two approaches differ by 6 dB (there is a 6 dB pad between channel strip and summing bus, not mentioned in the instruction manual). Not a big deal, but beware when you pre-listening.

2. Interference (bleeding).
When I have a sound coming from Firewire (perhaps, other inputs too - I didn't test this), I can hear it even though the fader on the channel is at '-INF', and no input is selected in the 'Control room source'. This is valid for all outputs. The approximate level is 57 dB in the phones (in the right channel, less in the left), I didn't measure it on the main output.
Mackie claims, their measurement gives 99 dB leakage. Mine is ceratinly larger. Maybe, a device error. Rather disturbing, when you're trying to listen to some details on other channels.

3. Muting and solo.
It was only after using the mixer at a concert that I realized, and then found in the manual (yes, it is there, though not in the Muting section, so read carefully), that the MUTE button doesn't actually mute the PRE AUX sends. Hence using PRE AUX for monitors (as Mackie recommends) became a living hell: when I needed to turn a microphone off, I couldn't use the MUTE button, I needed to set its gain to 0. Using POST AUX for monitors is not good enough either, because the fader setup cannot then be changed during the show.
Only Control room outputs allow for the needed flexibility, but then - no prelistening or Solo, as I used the PFL Solo for monitors.
As an additional feature (or the lack of one), neither MUTE nor SOLO buttons have any indicators. So you need to remember, what you switched off. Guys, if you need to turn the microphones on and off during the show, do not use this mixer!

4. Support.
My first email to Mackie is dated 23 October 2010. Their first response came on 3 December, saying that they had email server troubles. Another email came on the 10 December, explaining that their email system was down for 'nearly two weeks', and asking me about OS / DAW details. I replied the same day. The conversation proceeded in almost the same fashion - approximatelly one response in two weeks. Mackie claims this is due to personnel reduction in support. Well, if they have that many support issues - that tells me something about usefullness / quality of their products.

Mackie might have a good quality pre-amps and equalizers, but this is not a product yet. A product shall work as advertized (Firewire playback shall play what is there), it shall have well-thought features (like MUTE shall mute, right?) and proper configuration possibilities (where do I set my monitors?). An expensive product from a known company shall anticipate my needs (mute LEDs?), since they presumably have more experience than I do. And, last but not the least, a good company shall have a good support. The God is in the details, they say - well, Mackie is far from it.

So for everybody evaluating a Firewire mixer - unless our needs do not overlap at all (you don't need monitors, you don't manipulate with microphones, you don't use solo, etc), Mackie 1620i is not for you. If I had a chance, I'd rather try a Phonic Helix Board 18 FireWire MKII - I don't know about its pre-amps, but it has all the switches and LEDs that I'm missing in Onyx 1620i.

Playskool17's review (This content has been automatically translated from French)

Mackie Onyx 1620i
4
All details are on the site mackie:

No sections of effects (purely analog console if we except the FireWire output).

I turn 18/20 especially for the presence of phantom power per channel.

It is an analog console, it's easy.
I read the manual that is fairly complete, clear, and in French.
Are on 60mm faders alone, but it was enough in light of what we do with (repeat and bars).

Well, it's not a Midas (it's not the price of a midas either), but was already very good job of this award-l. A bit of breath when you push earnings to extreme, a qualisation quite effective. The Pramper are very correct.

I use it for 3 months. I already used high doses RAM pico 16:2 (I speak just for fun, this is the greatest console 16 channels of world), a Yamaha 01V, and a Yamaha amplifier e I can not remember the REFERENCES.

Compared the 01V, it is mainly the simplicity of use: I was tired of being the only group I know of to connect the console. Obviously it is also much less CHRE, but that is normal (no effect, less track, ...)

Compared the yam which amplifies silent in the same price range (if one excludes the portion amp) is much better in terms of transparancy and sound quality: notably less distortion.

It is a console that takes up little space, trslgre that sounds correctly, and even my drummer knows the plug! I am very satisfied.

on the other hand I do not think it is very suitable to the quality of live apche when even a little too much in Pramper. For small gigs in bars, yes, but if it is to make bigger ...
With exprience, I do it again this election without much hesitation.

Mackie Onyx 1620i manuals and other files