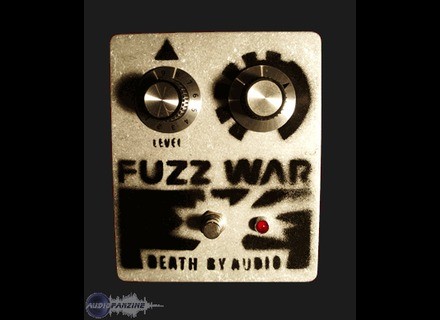 All user reviews for the Death By Audio Fuzz War

AceLeppard's review (This content has been automatically translated from French)" VRAAAAAAMM!"

I have the "new" version, three knobs:
Two large knobs "Fuzz" and "Tone".

The Fuzz rule well in the distortion of the signal, the "Tone" is more like a kind of filter, which does not goes from dark to light, but that seems to offer a suite of various grains.

A volume knob, smaller, which apparently existed in the previous version in the form of internal trim pot. Very good idea to have moved the pedal.

With her big knobs and stencilling, this fuzz is beautiful, it does not hurt!

Setup is simple, I did not even have a manual with it.

Editing sounds is easy as long as you know how to operate such effects. On too clear sound rendering will be sour and aggressive (it differs in that the Big Muff in my opinion), then it will be messy and uncontrollable on the overly saturated.

So you set a nice crunch and dynamic ...

... Wow ...
The sound that comes out of the box is really impressive, regardless of the amp (tested with a Fender Deluxe Reverb and a Marshall 1974X, both pushed crunch) or used guitar (Gibson Les Paul R8 VOS and American Fender Stratocaster Vintage).

The sound is dirty and aggressive, as a "classic" type fuzz Fuzz Face, but at the same time seems unusually defined and musical, and that, whatever the setting. Or the Fuzz Face sounds best with the Fuzz knob fully (and almost same for the volume knob), the Fuzz War gives radically different results if one takes the trouble to fiddle with the settings.

With Gibson, tone and fuzz in the first half, there's enough there to take to Tony Iommi in the 70's.
With a Strat, fuzz up and Tone to 13H, grain immediately evokes "Super Stupid" Funkadelic (Eddie Hazel on guitar ...)
The grain is all so very hot, no sharp little too aggressive for that heals the setting of the amp (already made much more "bright" with the Deluxe Reverb).

The pedal has this natural "vintage" warm color, and there's also what approach Josh Homme and Jack White closely.

Fans Fuzz Factory, Maestro or Tone Benders, go your way, you are here in the presence of a Big Muff in the acid which would be put to prefer the crunch Marshallese clean sounds Fender and Hiwatt. I dreamed, Death By Audio did!

If the sound was perfect on Marshall, he was a little too "bright" on the Fender, and a little too dark on my Laney. A knob "Treble" perfectly complement the pedal, but it does bother me that finally bit soon as I go on a Marshall Plexi.

I was not at all out to buy a fuzz, let alone a bizarre product manufactured by an unknown company (rare in France), but the seller put it under my nose and I literally fell in front of the stop its happened to me in the face.

I immediately compared with a Zvex Fuzz Factory (too complex) and three Fulltone ('69, excellent but too "clean" Octafuzz, excellent but somewhat strident nonetheless, Soul Bender, also excellent, but lacked the touch of madness and magic that at the Fuzz War).

My Fuzz Face Hendrix really was not as versatile, and not easy to stall in view of its strong vintage character. The Death By Audio, despite his character more "fat" is much more versatile in my opinion. It is an idea that I was the ideal fuzz, both arch-dirty and literally awesome, and at the same time manageable and music.

I like his looks, great value for money, all the sounds that can be drawn ... It was the missing piece to my board. It is still early to talk about experience and perspective, but So far, So good!

2 buttons, volume and shape (tone / filter), which acts like the filter of a rat, + internal adjustment to the rate of gain.
It's really a breeze to use.
The gain setting could be accessed without using a screwdriver ... but good.

Very big fuzz sound which can evoke a bit of a big muff, but much more raw, more gritty, less creamy and with a tighter grain, more fuzz, less distortion.
With the controls you can send heavy without being "eaten" in the mix, both in lead riff.
This pedal has a sound of his own, just give it in the very brutal and savage.

The sound is deadly and very special, with just 2 settings there is access to a good range of sounds.
The only drawback was the only gain access with a screwdriver.
A very good value for money, especially compared to other effects death by audio.

Colden's review (This content has been automatically translated from French)

Death By Audio Fuzz War
5
It is a kind of fuzz pedals Big Muff brand Death by Audio. It is manufactured by hand in their NYC. The brand is known for both it manufactures custom pedals for Trent Reznor of NIN and Kevin Shields of My Bloody Valentine for his line of boutique pedals available on its website and at retailers with a fist the goal is to CRER inspiring effects to sound modern and indict.

Two potentiomtres on the pedals: one level and a filter. It is not just a tone "bass - treble" as one can find such a classic Big Muff, but a filter medium which is a big scoop the Way Huge Swollen Pickle up a hump gives a more nasal sound of fuzz type of Pumpkins Siamese Dream.
On the inside of the pedals, you can adjust the gain with a screwdriver once.

The sound quality is excellent. I possd many Big Muff clones and "boutique" and this is the best for several reasons: the quality and precision of the filter (filters are great specially DBA) that allow to find concert concert APRS and conditions diffrent its "sweet spot", the richness of harmonics, and the fact that it remains even when trs brutal without compromising on the d finishing his.
I couple with an MXR Dyna Comp with a high compression ratio for an explosion of fuzz out.

I use it for 9 months (actually since the day o my band opened for A Place to Bury Strangers, the Group of Death by Audio crateur o I took a slap phomnale their sound). This is the pedals the more "classical" DBA, although she remains Djante just right. It is also the most affordable range and a good way to get into the brand. It is perfect as a main rhythm fuzz to reinvent Fawn modern and uncompromising sound of 90's.