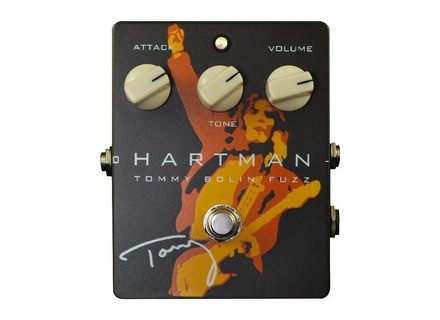 Hartman Electronics Tommy Bolin Fuzz
5
Fuzz pedal with a silicon transistor, hand made by Theodore Hartman based in Berkeley, California (For Dummies by geography, it is in the Bay of San Francisco).

You have a set of attack, tone and volume, a jack in and jack out, a switch to trigger the effect and power type Boss. An orange light activates when the effect is activated (in case you'd be deaf but not blind). That's classic.

The pedal is almost square itself which means that without being huge, it will take place in a pedal (as much about a Fulltone drive or Diamond).

Quite simply, you connect, you press the switch, turn the knobs and you find happiness.

A small English manual comes with, but you'll need?

This is a cloned fuzz on that used by Tommy Bolin of Deep Purple and time of Specrtum Billy Cobham. Theodore Hartman has had access, with support from the family of Tommy Bolin in the material and recreated identically the fuzz he used. It is an argument that can do some marketing, but after several tests on a Mesa Boogie F50 (Retube in NOS) and various strats, I found that particular sound that I particularly enjoyed in Spectrum. We find this particular grain of fuzz without the side a bit too bee Big Muff. In fact, we end up with a sound close enough to the Hendrix fuzz face (I say close enough). It is also very comfortable with my Heritage H-535. That said, this is only my opinion, I do not like the combination of fuzz-humbuckers, I think the fuzz comes into its own with single coils. In this case, Tommy Bolin Fuzz sounds beautifully.

The tone control acts more like a low gear when it is turned in the direction of clockwise. Responded remarkably to the fuzz guitar volume and intentions game which is a mark of excellence.

Used with a Fulltone Clyde, a J-Drive Mk3 Diamond, cables and power supply Vovox PCioks AC Driver, Tommy Bolin Fuzz fits perfectly and, alone or with other effects, is very effective. It does not alter the texture of the guitar (as long as we can talk) and fulfills its role fuzz of high quality. In combination with an overdrive (more crunchy than saturated) we end up with incredible sustain, worthy of Carlos Santana.

Ordered online directly from the manufacturer in Berkeley, she came 10 days after shipment (without customs fees to pay for it is just below the threshold of taxation) by USPS.

It's a pedal boutique therefore $ 160 price is perfectly justified. It's handmade, "point to point." You should know that Theo Hartman works only with carefully selected components and, like its competitors and colleagues are most serious, he stops the production of its units when he can not find the critical components. It is a guarantee of reliability and quality. It also makes it quick exception items. Still, the quality at a price, do not expect to have an Aston Martin for the price of a Twingo.

The only downside may be the screen that represents Tommy Bolin, it may not please everyone. Personally I prefer the simplicity of a solid color, but also a pedal in tribute to a great guitarist gone too soon. I would not bother with the wishes Theo Hartman extraordinary, but I think that asking nicely he might agree not to drawing.

I love this pedal and do it again this election if I lose or if I had been robbing. For the rasions I just mentioned, if you decide to order, you will not regret it and will feel like entering it into the Holy of Holies of the lucky owners of pedals except, of which the fuzz is definitely party.