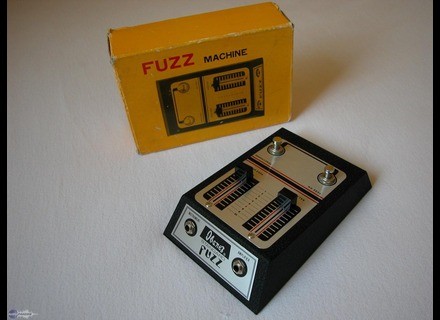 Ibanez 59 Standard Fuzz
3
This is a really old-school, classic fuzz pedal. There are only the 1/4" input and output, as well as the input for the power supply. It can also run on a 9V battery. This is a purely analog pedal, I'm pretty sure that was all that was available at the time. This cannot be MIDI-controlled, or edited on a computer, or put into a rack. It's simply a floor pedal.

The effects editing on this pedal is pretty basic for the most part. It's got levers, which is a nice change and is really easy to use when you are gigging. There is a balance pedal, which is great for adjusting the level of fuzz signal and clean signal. There is also a lever for fuzz depth, which controls the amount of fuzz. There is a footswitch for turning on the fuzz, as well as one for turning on the second tone, which eliminates most of the midrange.

I'm not sure why this pedal is considered a classic. It's cool for really dirty rhythm sounds, but they aren't the kind that I"m really looking for. The regular tone is definitely cooler than the other one, the midrange really dominates the tone and keeps rhythm sounds rocking. However, I can never get a lead sound that I like out of it. I also really don't like the second tone, with no midrange this pedal sounds bad. I'm not a fan of it overall, but I guess some people out there might like it.

I think that this is an ok, but mostly overrated pedal. I guess I was hoping for something really great, since it had such a good reputation. I'd say check it out if you're interested, but don't expect much if you're looking for clarity or something awesome. You're also likely to pay much more than this pedal is actually worth.

Ibanez 59 Standard Fuzz
4
It's a simple fact trs. A former fuzz pedals. Analog, of course.
Premire note: potentiomtres are linear. They are only two: one called "balance" that RULES in fact the power of sound, the other named "fuzz deth" which can add or remove grain effect.
Then, two push buttons. One that simply launches the effect ("fuzz on") and the second which adds a modulation of Tone as a octaver almost making her a little more aggressive may be ("tone change").
It's a dating pedals of the 70, so no external power. Just a 9V battery.

Buy without a manual, but use super simple ... not a lot of combinations finally.
You just try to find his sound. Be careful though the association with other pedals, it is necessary to test several chaining.
Personally, I use it with a tremolo, I just APRS place in the chain.

Effect implacable. Simple and compact. Everything is matrisable, allowing noise and feedback, but just enough and that we can CONTRL very easy, depending on the relative positioning the amp or choking the strings.
I play a Gretsch G5129 Electromatik. In my string from pedals, there is a Boss OD2 (Overdrive), a Boss Tremolo, a Electroharmonix QTron Micro, a Delay and Fuzz from Danelectro.
The sound of the Fuzz standard is sometimes too loud (especially the coupled Qtron), I am therefore obliged to fall back on the Fuzz Danelectro, which is rounder and more "soft".
But the couple Fuzz Standard Tremolo is simply sublime ... trs crampsienne and garage. In short what I wanted.

I use it for just one week, but I'm dj conquered.
It possde vintage sound I was looking for and I could not find the pedals rcentes.
As to the report qualitprix this MODEL can not qu'tre bought "used", it dpend the seller and its prtentions. I think I've got a great deal, compared to 200 or 300 euros in sales prices that I saw dj.