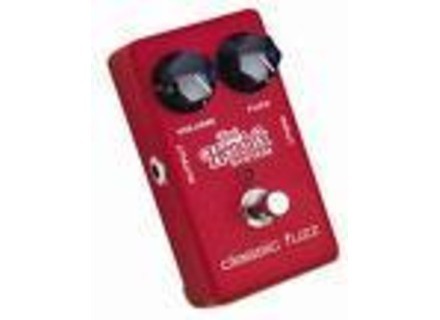 MXR JH2S Jimi Hendrix Classic Fuzz
3
Jimi Hendrix was probably the most well known user of a fuzz pedal. The actual fuzz that Jimi used was quite different from this, so I'm not really sure why they're trying to exploit his name by selling this fuzz pedal, but whatever. The fuzz is your very basic fuzz with a volume and a fuzz knob. There's an input, an output and a switch. Basically, it's your standard pedal that you see all over, and nothing about this is particularly different.

The pedal is housed in a very strong metal box, and it can take an absolute beating. I've jumped on this pedals as hard as I could, and there were never any issues I experienced. I've also had fans pour beer over my pedalboard, and the only thing that occurred was the pedals were a bit sticky, and the board smelled for a bit. They're very strong pedals. There is really no need to read the manual with this pedal as there are only two knobs that adjust. It's so simple that even a beginner guitarist could figure out how to set this up. Still, the manuals that MXR writes are usually well written, and they also have a nice tech support in case you need any other help.

This fuzz on this pedal is decent. It's not great, and it's not awful. It delivers that classic fuzz sound, but I find that it's not nearly as organic as other fuzz pedals out there. I also find that it doesn't exactly sound the same as the original fuzz that Hendrix was famous for using. I've used this as a light overdrive, and it can work, but there are better pedals out there for that. If you're looking for a subtle fuzz, this can do it, but there are better pedals out there. If you're looking for an insane, over the top fuzz, this can't really do it, and you'll probably want to look into the Zvex stuff. If you're just looking for a decent fuzz sound, this can deliver the tone.

This fuzz isn't the most versatile, it isn't the most dynamic sounding, and it surely isn't the best out there. There are better ways of getting that Jimi Hendrix sound, and I find that the only people who would buy this would be people who just want a decent fuzz for the price. I have other fuzzes that I prefer, but this isn't a bad pedal if you're looking for a solid, overall fuzz kind of sound.