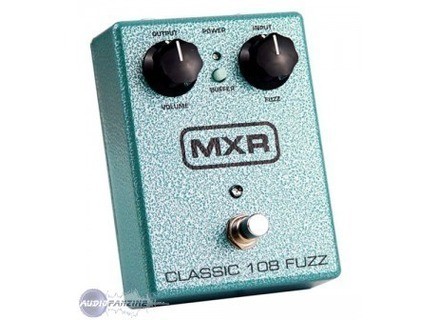 MXR M173 Classic 108 Fuzz
The MXR Classic 108 Fuzz is an analog guitar pedal that has 1/4 inch connections and has a power supply that comes with it to power it.  It isn't a rack mountable piece of gear as it is a foot pedal.

The configuration of the MXR Classic 108 Fuzz is really easy to follow as it only has a few parameters to play around with.  It has two large knobs for output (volume) and input (fuzz) and also has a button that they call "buffer" which is kind of like a compressor/limiter.  This is just about as basic as it gets when it comes to pedals and even those with no experience with fuzz or distortion pedals in the past should be able to figure out how to use it.  The manual for the MXR Classic 108 Fuzz is put together nicely but isn't necessary as it is easy to use on its own.

The sound quality heard from the MXR Classic 108 Fuzz is overall pretty awesome.  It definitley has a nice fuzz sound that is suitable for any type of music you would want to use fuzz with, although I only have used it for rock music.  It is a good pedal both for lead and rhythm guitar parts but I probably use it mostly for rhythm parts as I find that it adds a lot for certain types of parts.  I usually use this pedal with a Fender Strat and a '76 Fender Twin Reverb as the amp doesn't have any built in distoriton and I find that I always get some really interesting sounds that I'm happy with.

I've been using the MXR Classic 108 Fuzz for about two or three years and as far as strictly fuzz pedals go, this one is one of my favorites.  It has a really thick fuzz sound to it and while I don't always require fuzz for my sound, when I do this pedal comes in really handy.  The price of this pedal is probably a bit more expensive than it should be, but if you are looking for a fuzz pedal to use often it is definitley worth the price.  Overall, the MXR Classic 108 Fuzz is a great fuzz pedal that is reminiscant of some of those classic Hendrix fuzz tones.

It can hardly be simpler.
Volume, Fuzz, adjusted and play.

The argument "analog" m has attracted MXR has an excellent reputation, despite the lack of compelling audio clips (not really be an idea) I thought after all I have nothing to lose.
At first I was a little disappointed, unconvinced rendering ... It lacks fullness is barely audible ...
Then I emerged, changing scratching (Tele aerodyne), I set the EQ of the amp (ENGL Screamer), initiated the neck pickup (P90) and then ... THE revelation! (This may seem obvious but good!)
A grain to fall, then yes there is no "Tone" but who cares, it seems to me indispensable!
You have to play with the knobs on the amp and the guitar if necessary, personally I prefer a muffled fuzz too acidic (such as the famous dairy of the pub) after up to you!
As for the dosage of fuzz is noticeable as soon gouts.Il qu'enclenché even at low dimension and takes its limit (although spicy!).
Better than a good sole bare foot to engage the effect!

Used sparingly in my pedalboard (I prefer distos for the group), but will when I play alone at home, so for over a year.
I have tested on the eternal home of Muff EHX, but I wanted a twist (blue LED, some sissies complain intensity loupiote good eh but we will not quibble) and made another.
It's not a given pedal (even secondhand) but I would do this choice yes, we attach more and it is beautiful and robust as it should be!

MXR M173 Classic 108 Fuzz
3
Fuzz pedal analog Mxr large box-type phase 100, an input, an output, while mono.
One volume knob, a knob of fuzz that the saturation dose, a switch "buffer" handy to smooth the character of the pedal, making it cleaner, less noisy and apparently allows better control depending on its placement in the chain of effects.
Powered by 9 V battery or AC adapter standard, a real plus compared to an original Fuzz Face.

Right from the start, all regret in chorus a tone knob, although purists will say that this is not authentic. It's still handy, especially on a typed effect!
Rant also on leds: it's blue, it's pretty, but it shines so brightly that it would mask most of the rest of the pedalboard in the dark!

The gain knob kidding for some time to boot ...

The general configuration architecture is simple: no more than two knobs and a switch that will tend to always left turned on!
Manuel therefore useless, as most of the time in Mxr!
Editing sounds is easy, but the knobs seem to be interactive, you must spend some time looking for "his" sound!

This fuzz, contrary to what Mxr announcement does not have much of "vintage", it is cleaner than a Muff or Fuzz Face, more modern and malleable. In return, it is colder. I bought it because fell in love with his fuzz of Stevie Ray Vaughan or Eddie Hazel (Parliament-Funkadelic. .. Error! I did very little used, can not find the warm grain.
It is a good pedal, but not worth much to me over a big muff, much cheaper, a ProCo Rat, a Zvex fuzz factory ... or the multitude of copies Fuzz Face that flood the market today!

She sleeps in a corner of his knob fuzz atrophied: the entire headroom is in the last fifth of the race! I do not use more. This pedal at least I learned that I do not like fuzz.
If I needed to take a while, it would be a Big Muff I think, at least we will not break the wallet, unlike this one, whose value for money is debatable ...

You have to buy this pedal after a favorite, or if you really want a fuzz smooth, cool and modern!

lustror's review (This content has been automatically translated from French)

MXR M173 Classic 108 Fuzz
5
Fuzz pedal vintage guides
Input / output jack, jack 9v power supply
a volume control knob, one for the fuzz, a small button that changes the sound and increases the mediums it seems to me

What effect pedal ...
True bypass, small blue light (as often in addition to mxr, the LED stays on if the pushbutton switches on to the pedal bypasses)
You just have to be careful about al connections in a pedalboard!
APRS branch Trex or a distortion wah sound was quite rough .. TFW other compression pedals (yet with a true bypass)
So the guitar directly into the mxr fuzz APRS and the rest

*** Modif of 17/06/09: I changed the j odre connection from the fuzz after the wah and understood the usefulness of the switch "buffer" c ... well is marked on the record, I should've Read before forgiveness: a trigger when the fuzz is the APRS branch wah, a memory buffer to remove sounds very sharp and oscillation of some wah. "Branch after the budda wah it takes away the serious and the compression fuzz and c is better defined, cool

FUZZ This is excellent!
Type vintage, it is quite subtle, the adjustment being progressive, the fuzz is really taking its magnitude in the last quarter of the button without pissing everywhere.
The switch bring a medium coloration

The volume knob can not just lose too much volume compared to the light switches on when the
By lowering the fuzz effect can we have a slightly fuzzy overdrive or a pretty cool crunch
It can also play with the volume of the guitar to switch a good fuzz has a bluesy crunch
Telecaster a branch above, all in the mesa boogie, it sounds!
By adding a wah or delay, it sounds too!

Achetéie 2d ... but already tested a few hours
J had tried or heard a big muff (c is rather dirty just like his relation to the mxr) a graphic fuzz (can also be the mxr) bofff, a fuzz Benrod to a friend: I recommend against it by, the good stuff, good sound, made by a French manufacturer with the best components (the sound seems to me a slight decrease from the mxr, finally a test in parallle to be sure.
I am glad trs
I was looking for a good fuzz to complete my pedalboard, composed of fairly good effects qualitwah budda, trex Mudhoney distortion, analog delay mxr, ..)
has done!