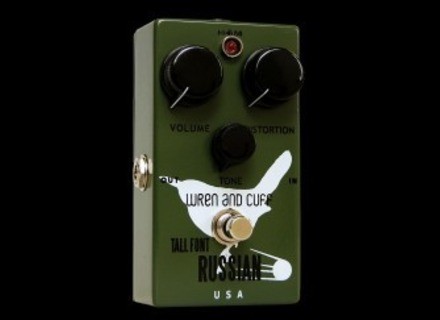 View all offers for Wren and Cuff Tall Font Russian »

Such as&#39; even more legendary "(Gilmour, Sonic Youth) Civil War, it has much less gain and distortion / fuzz than American versions. And a lot more bass. Many, many more bass.

We must read what the creator says (Cloner) and research that has led to production of specific knobs to find the sound of his version of the original (the Sovtek is very different, due to control quality and faulty components changing all the time). A true enthusiast (his name is Matt as Matt Stomp Under Foot, another passion).

This clone has the three standard buttons of muffs: Volume, Distortion (sustain the original), Tone.

Manufacturing is super neat. The elements chosen for their quality (jack, knobs ...). And it is green like the original. Level look, I preferred that the bird is upside down and death to "Death Records"

(the fans of "Phantom of the Paradise" will understand).


A manual? Not even look if there was one in the box.


So to say that this was the big muff bass is an understatement.

I was looking for a muff without much fuzz, but that can m&#39;exploser head in both lead and rhythm guitar and bass on my Rickenbacker.

After many repeated trials and in the studio, I&#39;m not disappointed.

On bass, it&#39;s almost too much for my group that was supposed to keep a side pop. But then we get high walls on each bass note. And the level of fuzz is more than enough to not blur the sonic character of my Rickenbacker. Moreover, this pedal meets the great mediums of Rick. So far I found that sold fuzz bass was a bit of a mixture of clean + honeycomb overlay. I wanted a more compact that&#39;s what playing with the TONE allows me to move from a synth fuzz almost a growl from the death of his granny.
Well you can imagine, when you try the line of "Hysteria" by Muse with the muff, you are live at Wembley without leaving your room. There&#39;s even the public hysteria ... oh no shit that&#39;s my neighbor who rattle! And most significant is that it&#39;s the first time that I can play this trick on his finger and it rings. I usually prefer the sound with a pick (although the original is played on the finger).
In short, this is the Russian Tall Font top for the bass.

On guitar, lead is going to be close to what people expect of a Civil War (as I do not play the solo of "confortably numb," I&#39;m not going further). In rhythm is as monstrous as the bass for powerchords or even agreements to more than three notes in a noisy environment. By lowering the volume of the guitar, we get a "dirty" noble cool to play arpeggios ... when one goes up the knob, it is in the grungy rock, the Stones, the black keys (which uses tall are true) .. this kind of subtle mirth.
I do not even speak of the effect produced when one engages Octaver (EHX Micro POG of for me) and it is not the gaffe knobs "octave down" is at the bottom.

In summary, I love the dark side and sharp (overboosted serious, full of sharp harmonic medium well now dug a bit less than the US version.

For a pleasant change, I boost my Celmo SardineCan (with correction switched on, or just the compressor) and / or my Fulldrive 2 Mosfet. It screams in lead ... guitar, not my neighbor. My neighbor only hear the bass anyway.


I did that for several days. I tried in my two groups on guitar and bass. I conquered.

The only negative is that it be ordered to USD. There is no distributor in France or even Europe. But I have to pay any customs duties (be that the seller takes a little put $ 29 of value on the package ... he just forgot a 1 in front

. And they put less time than some online vendors deliver French to me ... less than a week (to find the name of the seller, then look on Youtube wren and cuff ... chances are you fall on their videos).

Good as I had pre-ordered (but I did not have the patience to wait), I will receive soon the version of Civil War Stomp Under Foot. I would have an excellent point of comparison. While Wren and Cuff there is little released its version of the Civil War.

Anyway, Big Muffs, must try to find his.

By the way, reviews of Ronmo of AF and the site of Kit Rae to have a good idea of ​​the different versions. I think seeing my first purchase, I have a risk of collecting too. Maybe I should take one closer to the "Triangle" for the guitar. But the bass is clear that I have used.

Quality / price ratio excellent. OK when compared to the cost sixty euros a US new Electro-Harmonix, it may seem expensive, but you do not play in the same category of manufacturing and the sound has not much to see. One day we may understand why EHX does not have its own clone of the Sovtek.

See all 8 photos of Wren and Cuff Tall Font Russian »

Other Wren and Cuff fuzz pedals