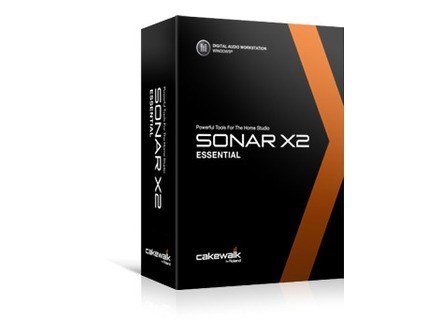 Cakewalk Sonar X2 Essential
4
There were no compatibily issues when installing CakeWalk SONAR X2 on my i5 Core PC. It installed quickly and I was using it in no time at all. The manual that comes with it was easy to understand, I didn’t look at it much because I was already familiar with SONAR’s workflow. If you are coming from another version of SONAR then chances are you will be really familiar with the X2 version. All of the main functions are easy to do with this software, the interface is simple and efficient.

I have not had a single crash or error since I installed CakeWalk SONAR X2 on my computer. It runs at a high performance with no lags, freezes or crashes. It can cause some problems when bringing in 3rd party plug-ins though. For some reason SONAR has always had some issues with 3rd party plug-ins.

I have not been using X2 very long, but I have been using CakeWalk for a long time. This is the first time that I have even heard of X2 from SONAR so I was very curious as to what new features they have added from the original CakeWalk Sonar. The main thing they added with this version is some new stuff to help with editing, mixing, and mastering your projects.
If you are going to install this on your system make sure you have plenty of CPU and Disk Space because it can eat it up pretty quickly. You will need to have Windows 7 or Windows 8 for it to work correctly and at least 2 GB of RAM.
It only comes right out of the box with 11 VST instruments, but most of those are pretty good until you start bringing in 3rd party VST’s. That is where SONAR X2 loses some lead way over some of its competitors. The new FX chains are pretty good and the sequencing is pretty easy to work with. There are still a bunch of other DAW software programs that I would choose over this one though because of how all plug-ins work with them.

Ehma2Retour's review (This content has been automatically translated from French)" Always surprising."

Cakewalk Sonar X2 Essential
4
Well it is time to install, but there are many. Two serial number to enter and it's done!

Well, it's still heavy for a light version called. It should be a modern machine (a core 2 duo only) and a high resolution screen.

If not it is a stable but little fluid (i3 iMac).

I rarely use it, it is mainly for bosser with old files or from users Cakewalk / Sonnar.

This is a very good product, but not always easy to use. However, it offers the key to enter the world of computer music. We could complete various plugins (there are plenty as freeware) to do the heavy industry.

The interface is neat, but sometimes confusing (especially when software instruments are used).

Overall this is a good product worth its price. The plugins provided are correct, especially the Virtual Sound Canvas. It is also an excellent starting point for the composition under Windows.