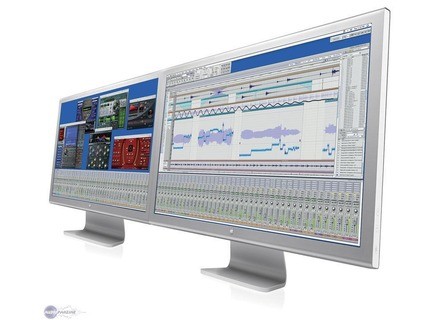 All user reviews for the MOTU Digital Performer 4

Average Score:4.2( 4.2/5 based on 6 reviews )
Not satisfied with those reviews?
Our members also liked:

MitecHill's review (This content has been automatically translated from French)

MOTU Digital Performer 4
1
The installation went normally. But it pares the drip pan is ca. especially if you're used to pro sequencers like Pro Tools, Nuendo / SX or Logic.

G5 2x2.2GHz 1.5GB RAM and it works correctly. Snt trs performance limits. Eg the 32. Floating not know! The bounce in real time either so everything must be done in acclr of or decrease in quality of bounces. Especially if it's 44.1/16. To stay in the field, the bounce in batch is also unknown to the battalion so if you have 40 tracks in the project, everything must be done manually!
In short, if you have time to lose, get DP

3 months in spite of myself. Dja silent install it when I took this job. But I russi convince to go with Nuendo. The ratio quality / price is bad. The plant turns you into gas oprateur computer instead of your life easier!
Repeat the same choice?! Nor is it going? still 3 months and I am a monk. Really what you dgoutter of making music.

mswing's review (This content has been automatically translated from French)

Koike no dongle or whatever, so we can run it on multiple machines at the same time

the manual is well done

The software is very intensive mixing, management bus, Aux,
It does not really go down very low buffer: I work at 128 K in buffer size, the logic or pedal!!

in monitoring logicel there is an effect on the phase byzarre entries, with a buffer size of 128 ... He finally c reboot fo desfois byzarre
Forgot to put an EQ or koi in between, the latency will feel too

Avoid bar and watching the resource is parcekelle proc tends to soar, let's say 2 or 3 ke Virtual Instrument, Kelker plug is the use of 8 bus Mixing + 2 rev in Aux and you are in the Red
Kel Difference with Logic! the use of IV and the management of native plug the machine has nothing to do with DP c why I changed

So it becomes cumbersome to use

I'm using DP since version 2.72 on G4 400 Mac OS 9
.... the best I could config native utilisbr />
Motu has been able to manage the difficult transition to OS X this great software, it sounds more like the way: the audio engine is pasty is heavy, even the original plug, including the famous preamp does not sound like it since version he buzz and blast !!!!! something crazy
the mixes sound more, lack of relief, aeration arriv I am no longer do as well as on OS 9 .. What happened to people even recognize the umd and know nothing!

But this fucking app is the Best I say the best sequencer general market:

I pass as beacoup people disappointed by motu on logic, but even if in resource management and logic of the machine is doing much better, it is no Audio shit!

especially on the 4.6 software ergonomics has evolved, but it crashes often + ke logic and its audio engine is doubtful ... ke I know I made enemies by saying was, but I am disappointed the first, even in English this software is simple to use that logic in French!

plenty of other stuff ...

The Logic and more - DP
+ The management of the machine (there are no pictures!)
+ Plug nettenment of logic are better and sufficient in most cases
- DP from the plug of the MW and moog filter means are
Best + graphical user interface, and instant results of changes in apple (logical!)
+ Power save preset slice ca's great
+ Best Sound
Arrangement + + + and software clear

Anyway ... DP I miss and I hope that version 5 will improve the stability and the audio engine, and it will be my pleasure to turn my thunderbolt Software mank me so much!
Did you find this review helpful?yesno

an21's review (This content has been automatically translated from French)

Plug-ins home are terrible, especially the MW and the LORD preamp super efficient.

I use it for a year, it is beautiful that logic months or cubase, but it is for sound and no image
The cool thing is that unlike Pro Tools, IT HAS NO DONGLE TO THE CON THAT WHEN THE FORGOTTEN YOU ARE WRONG! (And j'inciste!)

After, which is very practical in the long run, but not very intuitive for people who come in Cubase: this tool palettes running around and having fun window hide and seek, and drag n drop and company!

I would do the choice of tomorrow!

PS: This is the software used the Universit de Montral. I had classes on DP and c'tait terrible!
Did you find this review helpful?yesno

noize_organizer's review (This content has been automatically translated from French)

PowerBook G4
No problem
Must not overload plugs in, but OK for compo
stability ok

6 months of use
I previously worked in Cubase SX that I found quite good but a little dense graphic and definitely not to my liking in terms of audio engine.
I bought ProTools in parallel for compatibility but I think Digidesign drop the vampire as soon as I can (even for my studio pro). I am really angry with their marketing policy, their failure to follow their minds and unjustified monopoly.
I like the opening of DP and all MOTU products abroad. The possibilities of the gas plant are just awesome and the integration of Reason is a marvel of user-friendliness.
Music in the image (and component mix) is very flexible and precision pleasurable.
When I think of decision-heads I had with ProTools to make it work a bit with Reason, never again!
Now that the G5 is, I believe it is time to make smart choices ...
One downside: no way currently to create an insertion point in the virtual mix out via the audio interface and return (eg to insert a compressor or EQ physics) ... a function of ProTools handy for possessing the outboard.
There is always the possibility to route the output of the track on the audio interface, to insert the external re-enter on another track ... a bit tedious but it has the advantage of managing the gain posted in the said outboard ... to follow.
The price / quality ratio is unbeatable and ogling the side of Unisyn if you have any synths.
I would definitely do it again this election and I am even ready to make the promotion of this great product.
Did you find this review helpful?yesno

piergynt's review (This content has been automatically translated from French)

On an iBook G4 1Ghz and 740MoDDR, the software makes the most of my computer and I can use it everywhere, not like Pro Tools, ...
As against a small problem: there is not really intuitive manipulation to release a mix weaves in stro ... but it's not rocket science ... with the manual just has a quick and rponse RCIS.
Laurent DeWilde DP only uses for these electro albums ...
http://www.musicrun.com/interviews/dewilde/dewilde.php3

2 months of use and still no problem ... plugins are really well done and for the price, it is a good choice among the trs squenceur premium.
exprience with this choice I would do even if I plan to have ProTool will soon ... I find that to transport his computer and that's an advantage ...
Did you find this review helpful?yesno

MOTU Digital Performer 4
5
Installation without any problem,
on a G4 733 with 700MB of SDRAM, with a running OS X.3.2
The configuartion is no problem if we want to open the manual!
The manual is complete and in French trs.

With a G4 733 running round but must not ask too much ...
We need a more powerful computer and more RAM (1GB minimum) to extract the quintessence.
Finally I talk to use plugs type Machfive and effects on thirty tracks without syncope nervous ...

The hosts plugs are unfortunately too few, but of quality. The plugs imports from FXpansion (vst) do not rotate but it is always better.

I use it for a year and a DP for 5 years. I like this software and it makes me well (because I worth it?)
the sound is nickel, and the report Impressive qualitprix honnte trs (why pay more?)
APRS is it's so small software prfr it can no longer spare, but when I see Pro Tools studio shot I have no remorse!
Did you find this review helpful?yesno
Cookies help us improve performance, enhance user experience and deliver our services. By using our services, you agree to our use of cookies. Find out more.