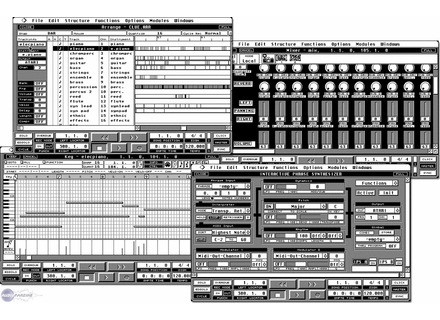 Seith's review (This content has been automatically translated from French)

Steinberg Cubase 2.0 Atari
1
Yes to install its cool summer it is the rest squeaky peu.A mention a red card for the launch of the autoupdate cubase to reboot the computer and gus home steinberg there has encor of which musicos surfing not and have not connected it is not my case but my music is becane not connect to net.Pas of incompatibility was first seen if not innovation basstation me plant at boot version yet purchased (better clarify ) .The configuration file is as usual from Cubase SX version of all these different menus to set the ASIO drivers, and the growing complexity of manual reglages.Le its going but there are too many things it's a little clutter these online manuals her fills me.

Barton 3000XP 1.5Gh ram DD serial ata 150 120 GO screen 19 inches, Gigabyte motherboard KT400 with no problem but installs via standard non especially acpi mode.
Its turns nickel.
Hard to say I did turn a sequence of 5 vsti in real time + 2 audio track its not flinch but his flinched before my cubase vst so .......
It is stable no crash last week.

Roughly one week, no I sold it on me or the store will resume for me cubase is finished I tried Logic Audio Platinum and I'll pass on the side of emagic no regrets.
the most serious problem is the audio engine shit, rebalance a vsti audio and you will understand the bounce mode logic allows to recover Type single or multiple vsti audio with perfect and identical quality which is not the case in cubase sx half the volume down and the stamp is duller even on pure audio tests with live guitar and synth sounds is the shit was serious and I have a good map audi ASIO2.0, not its not like away.The deliver the instrument with the soft crying of laughter are compared to platinum pack of emagic for my part I charge exchange soft and I close my parenthesis cubase tear to the eye e played with since atari, s.au goodbye charlie goodbye and never has.
Did you find this review helpful?yesno
»

Odelho's review (This content has been automatically translated from French)

Cubase 2.X is here, that after 1 and before 3 that it even prcd 4 before being followed by 5 which became after update cubase SX1 followed SX2 and SX3 now happening in ...

Ditto for the ads: Cubase 2.x is an old thing that we must now let rest in peace

good, but me has really made me laugh even when this mga dumpling and for that I put 10

Steinberg Cubase 2.0 Atari
5
Good trve slander, I do not know why this need to return to cubase 2.x, but turned on my great Megastes

But the era c'tait Ouachi a good tool!

Otherwise, if j'tais just stuck with an Atari, I would do without this choice hsiter.

Steinberg Cubase 2.0 Atari
5
The silent installation extremely simple: a floppy disk in the Atari 1040 ste, and shoo!
The configuration presented no problem.
The manual trsdtaill silent. I even learned programming sysex.

The software silent hyper-stable: no bug in eight years!

About performance, the more powerful Cubase silent most squenceurs hardware. Just remember the pro studios, which often quips taient an Atari and Cubase.

Quality-price ratio: excellent. A great tool for anyone who wanted to engage in the computer music, but taient broke.

I do not regret having made that choice, I Whereas the squenceur as having rvolutionn computer music.