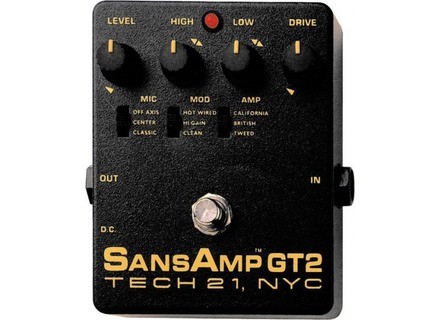 Tech 21 SansAmp GT2 (1st edition)
4
The Tech 21 SansAmp GT2 is an analog guitar effects pedal. Kind of the first modeler before there was digital.
The SansAmp GT2 is a direct-in or preamp-in tube amplifier emulator. Basically, that means this product helps the user reproduce that warm, natural sound of a tube amp, all while allowing the tonal personality of the instrument to remain unaltered. To go a step further, the GT2 doesn't just emulate a "generic" tube sound, but instead can be adjusted to emulate the tones of some of the worlds greatest tube amps like Fender, Marshall, and Mesa/Boogie. And the best part is that getting these great tones is easy.
The pedal is analog so it directly cannot be edited with a computer. It has a regular 1/4" jack in and out and a 9v adapter in.

It is easy to get a great sound.
The SansAmp GT2 has 4 guide knobs and 3 "Character" switches. The "Drive" knob controls the overall amount of gain and overdrive. The "High" and "Low" knobs are active tone controls. As the manual states, boosting Low and High compensates for the limited range of speaker cabinets and combos. The "Level" knob adjusts the output level without altering any of the tonal characteristics.

There are 3 "Amp" switch settings located on the SansAmp GT2 and each one represents a different style of amplifier. The "Tweed," "British," and "California," represent the Fender-style, Marshall-style, and Mesa/Boogie-style, respectively. The "Mod" switch is used to influence the gain of the Amp-style selected. Clean" resembles a stock tube amp set up, while "Hi-Gain" and "Hot-Wired" push out a more overdriven sound. The last of the character switches is the "Mic" switch. Here the "Classic" setting increases the mid-range and gives greater definition to the notes. The manual recommends this for classic early tube amp sounds and for live applications. The "Center" setting gives greater high mid-range and increased low end, and is recommended for getting a bigger, stronger crunch sound. And the "Off-Axis" setting is similar to the Center setting, but produces a smoother sound with less upper mid-range.
The manual is clear and sufficient.

The sound quality is very good. There are many options available for it being analog.
I have used it live with guitars and have recorded guitars and bass with it.
The bass recorded and the hi-gain Boogie tones are my favorites and it does pretty good cleans, too.
I didn't like the Marshall tones too much- just sounded a bit thin to me.

For what this is and what it did before there was a lot of digital modeling, it is a nice piece of equipment. I like the recorded bass and hi gain Boogie sounds the most.
Value for the money is good and they can still be bought used for a good price if you want to experiment.
I think these pedals work best with direct recording and can be used live if you really need to.
I did not try other models before getting this - there weren't too many options back then.
I would make the same choice back then - but now there are so many options for this type of thing like Line6 and Fractal - I would explore the alternatives. So I'll give it an 8 for what it was back in the day and a 5 for this era.

Morby's review (This content has been automatically translated from French)

A manual? What?? The use is very simple!

Personally I am a fan of his:
- Mesa Boogie Amp (California) with the gain to "clean" or "hi-gain" and drive at 10
- Fender Amp (tweed) with the gain on "clean" and pushing a little drive (midi/2h)
on the mic simulator, at home it remains stuck in the "off axis" position, that's how it sounds best with my Strat and my Fender Champ25 customized.

In bypass mode no complaints, no mod on the sound.

I put a rating of 8/10 because it is the emulation, if it should completely replace a head Rectifier 3000 € it's not. That said, in terms of grain and especially dynamic one is well above the digital emulators that I would wearing a 4 or 5/10, it sounds really authentic with the frying premium (provide noise reduction such NS -2 if you are fans of Hi-Gain).

I bought this pedal new in 1993. At the time I began to scratch, and I bought a Fender Champ25, which had a super clear sound but its saturated shit. The SansAmp has allowed me to have a great popping sound.
Later I had the opportunity to try different amps, but I've always treasured this pedal has always to be helpful.
In 2012 I started having problems with the jack sockets, I made repairs. After refurbishment, the repairman wanted me to buy it and gave me € 180, more expensive than the price I bought it in 93 (about € 150 there 20 years) ... it is a sign that never fails: D

Note that this model "first edition", taking external power supply is not in the format "standard Boss" but "mini-jack" format, which requires a small adapter if you have a 9v power supply in its pedalboard (found at Thomann for neuro QLQ).
In "9v battery" power is consolidated reasonable fashion, we fall not down juice after 2 hours, rather after 5/6h. especially need to unplug the input jack of the pedal

A childhood friend who begin to scratch at the same time as I bought this pedal too. A few years later he sold his gear. Thereafter he returned to the guitar and was bitten finger no longer have.
I quote: "all the stuff that I bought a guitar amp and pedal, the GT-2 is the only thing I bitterly regret having sold."
As for me, no question of the sale!