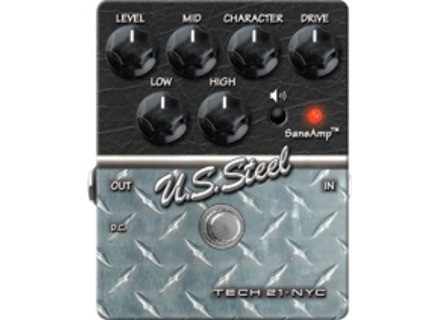 US Steel, Guitar Amp Simulation Pedal from Tech 21 in the Character Series series.

This is a new character series pedal from tech 21 called US steel. It's modeled after an american type of overdrive/distortion.

For a pedal, there are quite a few options which is always good for the tweakers.

This pedal is supposed to excel as a straight, direct in sort of pedal, right through to the PA or even better as a preamp into another amp.

pretty simple to use, just tweak all the knobs till you get something decent and then tweak again. Depends on how you set it up however, you'd probably get better sounding results if you plug into a tube amp of some sort into the clean channel.

Otherwise, you can hook it up direct to the board/PA/your DAW whatever it is and use the speaker simulation and try to get some workable sounds.

The one thing I like about it, is the switch, it's quite and smooth. It doesn't pop or click.

Everything else, I hate. It sounds nothing like the "US" amp it's supposed to mimic. Rather it just sounds like a distortion pedal with lots of tweakability. There's nothing tube-sounding about this pedal whatsoever. The speaker sim is actually quite bad. It sounds better when it's off, whether that's plugged in to a tube amp or not.

It doesn't even sound like a good solidstate amp. It just sounds horrible. I've heard many clips and some people have been able to make it sound decent at MOST. But that's it. I really think this one's overhyped. The rhythm sounds are probably the best sounding thing, you play leads with this and you'll notice right away how the notes decay is so inorganic and unnatural sounding.

There's this artificial high end that just can't be dialed out with this pedal no matter what you do and if you go to the extreme settings it just muddies up completely. Not to mention it's quite noisy with the gain higher up too.

Overrated. Sounds nothing like what they claim it to sound like. Sounds like a distortion pedal, with an annoying high end frequency that can't be gotten rid of. Doesn't sound like amp distortion either, and the speaker sim is completely unusable. The only good thing about this pedal is the build quality and the switch is not noisy. I like tech 21 effects pedals, I think some of their stuff is really good. This is not one of them. Definitely look elsewhere for your boogie in a box.

geezer79's review (This content has been automatically translated from French)" Rather realistic!"

Many options to sculpt his sound: low / high / mid + character: it is very useful because it defines the desired tone (depending on the amp used) frequency, attack and "drive".

Very realistic, it sounds "organic", perfect for the big rock or metal, however not for death metal ...

Level: 12 or more depending on use

I use it for 2 years. The quality is present (rugged, ready for many concerts / rehearsals).

I previously had the Line 6 Uber Metal and EHX Metal Muff, not bad but less "natural" level of sound quality.

I love the fact that we can sculpt his sound, however it blows a little, especially with the knob "character" cranked (using a noise gate is essential in this case).

Yes I do it again this choice.

le reverend's review (This content has been automatically translated from French)" The Rectifier, but a bit less muscular"

Tech 21 US Steel
4
An input, an output, uen std 9V power supply, a three equal bands, gain a level, that for the classic.
Character button which will act on midrange frequencies seems to me there, and a push for the simulation of HP

Simple configuration, turn buttons, we listen, we care or we throw!
A manual, but deuce, it would very expensive for what purpose?

I can not judge the sound quality in the configuration where I used the pedal connected to a Torpedo CAB connected to a monitor.
Sound quality. Adjust the tone is very plausible, at most one can blame him a slight lack of dynamics compared to the amp copied (that I know)
However, we believe in and that is the point. Corrections play their role, we can sculpt the sound in large proportions, both in tone and in the drive for use on all their shopping
I have not tried the HP emulation (because TorpedoCAB)

I have the bug recently, but I have a lot triturated whole afternoon in the configuration that I mentioned above. I was looking for a way to get sounds Correct configuration for a "light" (Torpedo pedalboard plugged into plugged into a PA) and my current pedals were not tough enough for many CAB driver. It's OK now, I have the solution. This will be her or his girlfriend, the AMT R1 that I bought at the same time. That will be his greatest rival.

For U.S. Steel
+ Tone correctors doing their job, a drive for use on the race, to even up sounds 'creamy' (R1 is much more single grain)
- Less than R1 harvester, but it did the job anyway.

Negens's review (This content has been automatically translated from French)"Really not bad!"

Tech 21 US Steel
4
Other pedal Series Tech 21 Character home, it stands out a bit from others in that it bravely ventured into the world of high gain.
Now simulate a distortion, which is enjoyed from the origin of a tube amp, this is no small matter.

U.S. Steel is therefore trying to simulate the sound of the Rectifier in Mesa.

It contains all the elements of the Character series.

Level
Drive
3-band EQ
switch on / off
Celestion cabinet simulation disengaged.
1 input, 1 output jack
Powered by battery or transformer
All in a box whose strength is well known

It is an analog pedal like all her sisters

The manual is very clear.
For editing, nothing fancy, you turn the knobs and you listen if you like it.

As a starter, I glued a Jackson Soloist Custom

Test live recording in my audio interface.
The speaker simulation is good

The character has an action button, which I like a bit less than on other Character.
I think it acts as a lowpass filter that leaves still spend too serious.

So that except for some bluesy crunch, it is rarely descends below the 14H.

The drive pushes far, far away, and like a real high gain amp, there is no point to go beyond 2:00 p.m. (also yes), failing to raise the blast.

The EQ is very effective, precise, fine and soft.
The lyrics are very effective too, with a mid scoop, you get a muffled report ..
The bass is to master carefully if you do not want a muddy sound. At the same time, although we recognize is the failure of the amp is simulated here. Well yes, a correction, it throws up the bass (as Default Rectifiers owners deny Each time you talk to them, and yet ...)
Acute side, it&#39;s great because we have no sound coming bee, even when pushed to the bottom.

The equalization of series character is far better than what is done in TN.

All the richness of harmonic distortion amp is here, and it is very significant. (A flaw that I noticed in TN pedals.

U.S. Steel does not disappear in a mix. Without a minimum of equalization, it behaves like a high gain amp: It overwrites all.

Are we close to a correct? Yes and no. The character is there, there is this something metal in the lower medium that is typical of the Rectifier, but it lacks the dynamic lights (The Leeds fared better on this point).

Test in section Poweramp Fender Dual Showman of my (I go through a 4x12 Celestion V30 and in G12h100).
One is almost tempted to leave the cab turned simulation that brings his character well. But do not.

While there, we are very surprised at the level of equalization: The mids are much too far forward, and it was a muffled, nasal unpleasant if you do not alleviate the pedal.

on the other hand, once reduced, there are only good. We feel that this is not a tube preamp, but the contribution of lamps section provides more power.

And the next character is a bit different from what we had live recording. This time, when you are beyond 15 hours, the correct side is a bit exaggerated, and it takes the breath along with the gain.

Although the AMT is that I have an E1 (Engl simulation), I&#39;ll still say the word on the overall quality of emulation:

With the Character Series, it seems to be with real amp.
With the AMT, was rather a feeling of being left with a disto filtered

The equalization of Character is very soft and natural while on the AMT, it equates to the trowel.

It does not appear in a honeycomb with a Character Series where the AMT you prick ears as long as you ride only in the midrange and treble.

The speaker simulation of the AMT is limited, the inverse of Character which is a feat.

I have since two days (It seems you are little, but with experience, it takes me no more to judge the quality of a pedal).

The only other sim that I have in the genus, TN is E1. In overall quality, the Character is largely over.
I also had the POD XT, my guitarist has the POD X3 Line6 and can be left to surrender.

The pros:
The strength
Sound (very good harmonic content and it does not look like a mere distortion filtered)
The excellent speaker simulation.
The equalization very fine and soft, without honeycomb amount treble
The drive that goes far enough.
The mushy side of serious correction (Some will see it as a default).

The -:
The mushy side of the correct (Some will see it as a quality).
Oddly pervasive mediums once disengaged cab simulation.
The parameter whose character most of the race is useless.
It lacks a bit of momentum to get a little closer to the simulated amplifier.

We meet here face a very good pedal amp simulation, and the high gain, it&#39;s a real feat when you know how it is not obvious.
Good effort from Tech 21 and I hope they continue.

With a tube power section, you end up with a good hybrid amp.
With experience, it is a choice that I could do it again.

Tech 21 US Steel manuals and other files