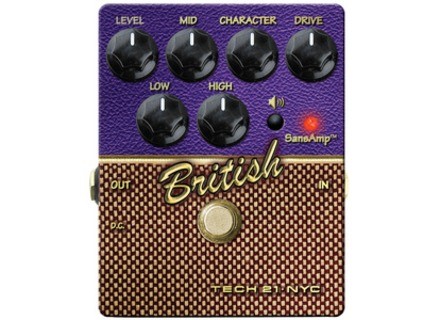 Single pedal very influential settings on the sound that comes out: notemment EQ which adds or removes a lot in itself being influenced by the setting of the character knob that sends you to the Bluesbreaker Marshalls Metellica on solos Kill em All (Not a lot of low and ultra nervous grain after the character knob race.
Manuel gives some examples of settings for approaching the famous Marshalls models.

Effective effects that may sound a little cold because of the lack of lighting, but if it is placed before a Device using (another preamp or compressor for example, the effect is very realistic).
Level of challenge slices of live line level consoles (EQ allows you to add frequencies that will suffer).

Good pedal overall still showing some weaknesses in the heat of the lamps that she did not and she tries to approach.
The grain and versatility of use, however, are a very good pedal carry around in case something or registration (and there always unexpected!).

Tech 21 British V2
5
Everything has been said in the comments of the V1, the only mod is the ability to disable the simulation HP

The few small examples provided with the pedal enough to give an idea of ​​possibility and operation of controls.

Those are extremely sensitive, especially the knob character and the medium control, a 10th tower is rotated and it changes the sound.

A condition used like any simulator on a FRFR system (flat spectral response), ie a good return or a good speaker is to date the best simulation of Marshall on which I had the opportunity to play.

Even compared to the very good digital gaming experience are there and it makes all the difference.

I strongly advice to use live sound, or sound card.

No possibility of storing sound as digital pedals, but I found a setting that suits me and that's enough.

Again using a FRFR system no interest on a guitar amp (you buy an overdrive it would be cheaper in this case).

I do not regret my purchase and suddenly I'm going to buy the blonde Fender simulation of caracter series. So I can play without an amp at home where in such config bar, having two simulation (not activate simultaneously) + some effects.