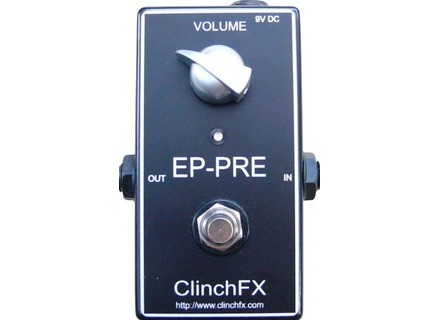 clinchFX EP-Pre
5
USE & SOUND
A classic and sought-after tone polisher, the EP-PRE is based on the Echoplex 3 Tape Delay preamp. If you already like your tone, imagine an extra dimension in harmonics and essence, whether playing electric guitar/bass or acoustic. The accompany demo tackles a number of instances and with various pedals (drives, delays, modulations) and preamps/amps. The EP-PRE includes two settings, based on the older (bright) and later (dark/warm) versions of the Echoplex, and this provides flexibility depending on what gear you’re using. For instance, if a tone is trebly or thin, the ‘dark’ version on the EP-PRE will make it sound fuller and richer; on the other hand, if a tone sounds too muddy or flat, the EP-PRE’s ‘bright’ version adds sparkle and upper harmonics.

The EP-PRE improves tone two-fold. First, the phase response of the circuit makes the EP-PRE effective in how it works with and enhances other gear. Second, the type of JFET used in the pedal is very similar to the original TIS58 found in the Echoplex 3 (which has long been out of production, but Peter Clinch, the engineer of the EP-PRE, discovered a limited production of JFET that came very close to the T1S58). To Peter’s knowledge ClinchFX is the only pedal manufacturer using this particular JFET.

Generally the EP-PRE should be placed after drive pedals, but before delays, reverbs and modulations (personal preference may dictate otherwise). The chicken knob controlling Volume does not increase volume very much and likely no more than a few decibels. Rather, the effect kicks in around 8- to 9-o’clock and once past that point the ‘effect’ from the EP-PRE becomes more prominent, as though increasing in mix. The result of that extra mix is not as significant with a clean tone or how it affects delays, reverbs and modulations, but is obvious with drives, distortions and dirty amps, viz., they sound more hot-rodded and aggressive.

You select the Version of pre-amp tone by the toggle switch located in the back of the unit (protected by a bezel to prevent accidental damage or flipping). Flipped up provides a brighter and older version of the Echoplex 3 preamp, whereas flipped down is a more current and warmer version of the preamp. Generally, I prefer the brighter version with an acoustic, but my drive pedals and amps vary – some tend to be either darker or brighter and seem to enhance differently with each version. Digital delays, reverbs and modulations sound good with either version, but in different ways (whether wanting a brighter or darker richness to the sound).

OVERALL IMPRESSION:
Developed and sold since 2008, the EP-PRE is a much desired pedal used by world-class musicians. A favorite of Pete Thorn’s, the EP-PRE is one of those pedals that you turn on and forget; it’s that simple to use and that effective. The amount of tweaking is negligible, as once you find the sweet spot (typically between 9- and 12-o’clock) there’s not much more to consider. However, an improvement in tone is only one element of the EP-PRE – the Echoplex preamp circuit was designed to boost and improve the quality and depth of a tape delay sound, and the same is true of the EP-PRE. There is a noticeable ‘richness’ and depth in delay/reverb/modulation quality that is apparent upon first listen. Consequently, if you want your digital effects to sound more organic or authentic, this is the pedal.

ClinchFX’s quality control is first rate in its parts, but also considering every pedal is tested and ready for shipping prior to payment. Peter Clinch also includes a preloaded Velcro on the pedal’s bottom, covered by a rubber protective strip (to prevent damage to floors, wood pedalboards, etc., if not using the Velcro). The protective rubber strip/pad can be removed and replaced repeatedly as needed. Finally, the power input is compatible with both 9VDC and 12VDC power sources (standard 2.1mm DC plug with centre negative) while drawing only 5mA of power – or you can use a 9VDC battery (not included).

At $149 USD (includes shipping to North America, with a Belgium distributor servicing Europe) the EP-PRE has a typical price, but is a worthy investment considering how well it improves a guitar’s tone and pedal effects; it will bring value to your pedalboard, rather than merely take up real estate with infrequent use. The EP-PRE does exactly what it’s supposed to, and its only limitation may be lacking more of a boost when turning up the volume – but that’s where the EP+ enters the picture, a different version (EP-PRE + Boost) of the Echoplex preamp by ClinchFX.

Titi1506's review (This content has been automatically translated from French)" The magic box!"

clinchFX EP-Pre
5
This pedal reproduces the prampli section of an Echoplex. So this is a kind of Clean Boost with a well particulire coloring.

Jimmy Page and Richie Blackmore had the habit of leaving their Echoplex lit even when not using the cho.

This pedal is hand made in Australia by Peter and Mandy Clinch. The components are carefully slectionns and exemplary manufacturing quality.

It could not be simpler, there is only one potentiomtre rgler for the boost level and a switch ON / OFF.

I think that this level, the manual is just useless.

Its level, this pedal is just GNIALE!

It does feel like the dye. The effect gives body and presence to the sound without dnaturer. And a time limit to the kind El Capistan, is a killer. Harmonic Wealth is also impressive. Nothing do with Xotic EP Booster which is more "coarse" in the same style.

I use several Les Paul's and JTM 45/100. The sound and the grain of Led Zeppelin are the (still missing fingers Jimmy Page).

It's subtle but very noticeable at the same time.

I use the pedal for about 3 months. I had also tried an EP Booster before ordering.

It's simple, this pedal is rarely hue and will never leave my Pedalboard. If I were stolen, I rachte another in the second!

It is not given but forcment shop and I prefer to give a little more money from small manufacturers that supply the major brands looking to maximize their margins all costs without really care for the quality and sound
Attention particulire Peter and Mandy Clinch who build the pedal on a request by mail and do not require the payment that the expedition.
Did you find this review helpful?yesno
»

Titi1506's review (This content has been automatically translated from French)" The magic box!"

clinchFX EP-Pre
5
This pedal reproduces the preamp section of an Echoplex. It is therefore a kind of Clean Boost with a very special color.

Jimmy Page and Richie Blackmore had a habit of letting their Echoplex on even when not using the echo.

This pedal is handmade in Australia by Peter and Mandy Clinch. The components are carefully selected and quality workmanship copy.

It could not be simpler, there is only one knob to adjust the boost level and ON / OFF switch.

I think at this level, the manual is just ... pointless.

Its level, this pedal is just ... FUNKY!

We no longer want to turn it off. The effect gives body and presence to the sound without distorting it. And before a deadline of El Capistan kind, this is a killer. The harmonic richness is also impressive. Nothing like a Booster Xotic EP which is much more "coarse" in the same style.

I use it with several LP's and a JTM 45/100. The sound and the texture of Led Zeppelin are there (still missing the fingers of Jimmy Page).

It's subtle but very noticeable at the same time.

I use the pedal for about 3 months. I also tried an EP Booster before ordering.

It's simple, this pedal is rarely turned off and will never leave my Pedalboard. If I were stolen, I bought another in seconds!

This is not necessarily given but the shop and I prefer to give a little more money to small manufacturers that supply the major brands looking at any price to maximize their margins without really dealing with the quality and sound ...
Special attention to Peter and Mandy Clinch who build the pedal on a request by mail and request a payment at shipment.