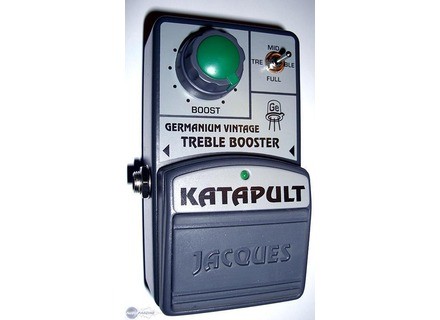 lsotis's review (This content has been automatically translated from French)

Jacques Stompboxes Katapult
5
Fortunately, the pedal is very simple because I do not know if I can adequately express all that. But she is so good that I can do that for Mr Jacques.

Effects: bin there is only one, a booster for high frequencies.

Techno: It is used a germanium transistor, not the silicon, which makes all the difference.

the fact is it editable: say there is just edit itself in a squatting position and rotate a single button, okay? not too complicated? oh yes, there is indeed a interuptor that lets you choose whether you want to intervene on the beaches high, medium or all frequencies, but if you&#39;re like me, you make your choice at the start and almost touch more if there This is to reassure you&#39;ve made the right choice from time to time.

Important because it is apparently not all pedals Jacques is a True By Pass, true true, I shall return.

I will add a battery cover much thought (I will come back too), a switch sensitive and quiet and did not look fragile. And since I do not really voice what he could miss ... bin that&#39;s 10!

The config is simple? Ben characteristics answer the question ... is not simple.

Editing is easy? The hardest part is to squat! Then there&#39;s just turning the large knob until the desired ecstasy.

The manual is clear? A manual ???!!! Well, if someone told me it needs a manual for this box, I hasten to advise her to do something else with his free time.

Efficiencies effects: while there! y &#39;has one and I would say that if you need a fact to support your (good) amp, it&#39;s this one. Everything else is window dressing. There you have the basis.
The trick where you put it out when you have the feeling of being naked next to the person most desired, but can not touch ... How frustrating!
Edit 02/02/10: my config has changed a lot, I now have an AC30, and even then, I can not get enough and am using the top boost channel!

I do not really know until you have tried but it is exactly that I needed! The treble is there and there, very sharp, highly crystalline but never become shrill or unpleasant as it may be the case when you push your knobs of acute too. There, you put everything in the middle on the amp and you just turn the knob ... the magic happens.
Clean sound is a joy as it is beautiful. In crunch is extraordinary and if you have an amp lamps ... hummmmmmm in disto is simple, you will end up with a definition of hell without the mediums that you eat up all the space sound (as was my case).
Edit: Except that with my new config, I&#39;m using more saturated sound. It certainly depends on the disto used but do not really mingle with the bulldog ... incompatibility of temper.

Use? Ben with my guitars, knowing that like all the pedals Jacques, that it fully respects the instrument and does not spoil it. And fortunately.
Edit: ... and the top boost channel for crunch sounds only, now, is what suits him best (even perfectly).

The true bypass: I said, it&#39;s not all his pedals. It has rightly been developed to be used solely and directly into the input of the amplifier. I also found that performance was better than in the effects loop. If you have a good amp that gives you the sound, this pedal is very likely, by itself, make you happy.

The battery: not yet tried but his explanations on the pedal and consumes very little performance is better with only a battery power supply. Another explanation that surprised me out of life, the carbon batteries (saline) offers better performance than alkaline and rechargeable batteries should be avoided because of their non-linearity of intensity (QED).

Edit: So there, with an AC30, the least we can say is that there&#39;s breath, even with a power supply boss. Only works on battery so ... Rechargeable because no one is more saline (I wanted to check).
And even stack it blows a little longer. Nothing really annoying but live recording ... note 9 to this journal.

I had gone to buy a equalize, although it myself a bit inflated. Playing on an LP and a TV (which is a little different), I was afraid to make me stronger Ch .. to spend more time poring over my foot and standing to play.
Outside, I have no prob at low frequencies, let alone the media but I wanted more presence in the treble. And off I went to the shop of Jacques himself without really knowing what I discover.
And now he hands me a small box with a big big button saying "you should try it" after trying to explain clearly my need (where he is trSE very hard!)
I for 5 days and already a concert in his name.
What I like most ... ben is what she did! What I like least ... Ben is obviously now I would want to throwing away all my other pedals to replace Jacques (from what I heard, read and seen ... ouch!) and well I sure can not! ... well, not right away.
The report Quality Price: Should already know that if you go to his shop, Mr Jacques makes you a price. While it may seem high at first sight, I assure you that it just test and suddenly the price looks (almost) sweet. Not really, it&#39;s well worth!
With experience, I hope not to be mistaken in the sense that I hope I do not have to do it again the next time, this same choice and it will last as little as I have already said, I hit the pedal to change ... and reliably for Jacques.
The guy is a true enthusiast, a well of science so far is tell it but explains very well. Our bass player, the same day, her prices as a pedal, a blower tube, and as you say that concert, he had only this one line in his amp and turned its zoom multi-effects!