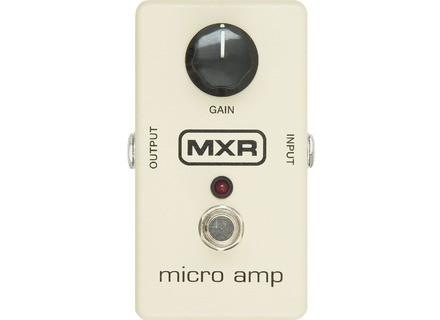 MXR M133 Micro Amp
5
Gigging and recording musician for 30 years but got pretty rusty on guitar for a long time (synthesizers took over) but recently inspired by the purchase of a Danelectro 56 Pro, have begun to play again. Currently trying to unlearn all my bad habits but having great fun with a 1974 Fender Vibrolux, Colorsound Wah Wah, Fender Jazzmaster and mxr micro amp.

I love the primal simplicity of this box - a rugged chassis, a decent switch, minimal logo and a single enormous black rubber dial (that'll be GAIN, then)....

The bottom is secured rather over-entusiastically by 4 screws and a metal plate, not exactly convenient but a lot better than a flimsy plastic hatch. After about the fourth battery change you'll probably be considering leaving the damn thing off altogether...probably not a good idea though.

The Micro amp does what it says on the tin really...it acts as a pre-amp stage to drive your amp at low levels without altering your tone. You get pure crunch without the fuzzy mess of most distortion units. In my humble opinion most distortion pedals out there are no match for an overdriven valve amplifier. Having said that I quite like a bit of fuzzy mess on the top once in a while

I would have to say the lack of the light is a bit of a pain. Generally speaking however, when this bad boy is ON...you'll know. Other than this little quibble there's nothing to dislike about this pedal.

Basically it's a block of steel. Built like a tank. Go on, kick it around for a while. Then check for broken toes.

The Micro amp is a very simple idea, executed perfectly. When you can't drive your amp too much (neighbours etc.) this will do it for you, without compromising your essential tone. I don't know how it sounds on other amps, but it sounds pretty fantastic with some hot valves!
I haven't been using a distortion unit since my Roger Mayer Mongoose Fuzz got nicked a while back, and am still considering adding a distortion unit, maybe a Rat or a Tube Screamer. But I see the distortion pedal as a kind of final stage for when you can afford to go over the top...then you can back it down to the Micro amp stage and return to your 'real' sound.
I'd just like to say I'm in no way a guitar guru, these are just my personal impressions of gear I own and use. Hope this helps someone.

MXR M133 Micro Amp
5
I purchased my first MXR Micro Amp used on E-bay for about $60. I loved it but it was an older model without a light to let me know when it is on and without an input to allow me to use a wall wart. I bought another one new and paid $90 at a local music store.

I don't know if you can really call this pedal a guitar "effect" because it does not really color my tone in any way. What the Micro Amp does is provide the player with a gain boost. It has one nob that allows you to determine how much of a boost you want. This pedal lets me set my amps volume so that I am where I belong in the mix with the rest of the band and then when i go to play a lead or a subtle finger picking part I can step on the pedal and get that extra juice I need to move out in front slightly. Before i found the MXR Micro-amp i had tried to use an EQ pedal for the same purpose, i found that it was harder to manipulate and actually changed my tone rather than just boosting my signal.

Now that I have the newer model I don't know how I ever lived without the on/off light.

Made very well and it's such a simple concept that there is very little to go wrong.

If you play both rhythm and lead guitar in a project this pedal is great. You won't believe how such a simple function will add to the depth and power of your playing.

MXR M133 Micro Amp
4
The MXR Micro Amp M-133 is the most basic pedal you can find. An input from your guitar, an output to your amplifier, a power jack and one volume knob, and that’s it. It’s very similar in structural design to the Phase 90 and it’s the same size: 2 ½” by 4 ½” by 5 ½”. There is a red LED that lets you know when the pedal is engaged and the pedal can be powered by a 9 volt battery or by an additional power supply.

This pedal is a one trick pony, but you are able to use that trick in many different ways. Basically all this pedal does is boosts your signal, and this will do different things depending on where you put it in your signal path. In front of a tube amp this pedal can push you over the edge if the amp is set on the verge of breakup, while retaining your tone. When used in the effects loop of an amp this pedal can provide a huge boost in volume if needed that is much cleaner than when it’s used in front of the amp. This pedal is also handy to match the volume of guitars. For example if you use low output single coils in a Stratocaster and then switch off to a hot rodded Les Paul there will be a change in volume during a gig. Kick this pedal on while you play the Strat and off while you play the LP and you wont have to be constantly changing your volume knob on your amp during the show

This pedal does not suck any noticeable high end off of your tone, so I would say the bypass is very good. This pedal is not an overdrive pedal, but can be used to push an amp into that territory if it’s placed before the input of an amp and it does that while staying clean and true to the tone that you start with. I mostly use this pedal in the effects loop of my amplifiers because I don’t need a change in preamp gain/volume, but I prefer a super clean boost of volume. This pedal works wonders here. What you put into this pedal is what you get out, only at a higher volume. I have experienced no loss of tone or additional noise when used with several different guitars and amps.

Overall I think this is a great pedal to have in your arsenal. It can push the front end of your amp, provide tons of volume boost in the loop, match signals for different guitars during a gig, and regain a quality signal if many pedals are used in succession. It’s built like a brick and it doesn’t take a lot of space on your board. I think it’s a great pedal, and I would suggest it to anyone who would need a boost.
Did you find this review helpful?yesno
»

MXR M133 Micro Amp
4
This is simply a 7 band equalizer in stomp box skin.
I believe it is all analog.
No, no editing through pc, just 8 mini faders
This is only audio 1/4&quot; connections
and it is not rackable in the traditional sense.

Setup is simple, plug your instrument in one end, the amp on the other and there you go. The sound editing is as simple as bending over and adjusting one of 8 faders. I have never consulted the manual, and never plan to. There is really nothing else to know.

The EQ is pretty good. Its a little noisy, but that is kind of a stupid deal with boss anyways. If you are really serious about EQ, you need a rack mountable, multi band equalizer. I use this on a Rhodes piano, and my Parker guitar. Works pretty good in getting some lows out and boosting highs to cut through the rest of the band for soloing. Works best after a distortion pedal to reduce the &; Like I said before, its a little noisy, I would never use it in a recording session, but in a live setting, no one would ever notice.

I have been using this for three years. I like its easy portability (its so small). I dislike the hiss you get when you boost the highs. This is really the only stomp box EQ I have ever tried. The prices for this pedal are decent. Its worth it if you need a clearer, brighter tone, or if you won't more low end say on a solo. Yeah, I would buy it again, its just so darn easy to use. But I love it, reproduce the sound of the amp by inflating the sound and giving it more body and thickness. You wont want to go with out this pedal if you can get your hands on one.

Did you find this review helpful?yesno
»
Read the 33 user reviews on the MXR M133 Micro Amp »