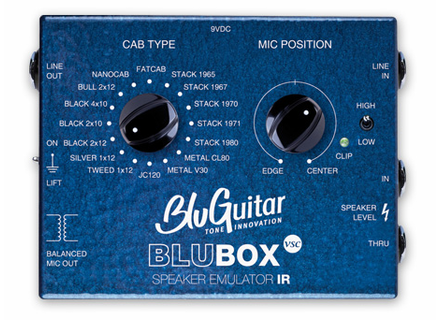 BluGuitar BluBox Speaker Emulator
5
SOUND:
With dozens of DI/IR devices on the market, some are exceptional while others leave much to be desired. Some of the best come from the Axe-Fx II unit in my studio, whereas some of the worse have been from inexpensive pedals (the DigiTech CabDryVr being the worse of the lot, and I like several DigiTech offerings). The BluBox’s position holds firm along with my Axe-Fx II and in some ways sounds better insofar as authenticity is concerned. With the Axe-Fx II there are several cabs that I like and which gives me the sound I want, but the BluBox sounds like it is pushing air – less digital and more authentically analog, although the IRs were captured digitally. There are a few reasons why the BluBox’s cabinets sound so visceral and authentic.

Its designer, Thomas Blug, has years experience working with (playing through) and mic’ing cabinets in the studio, and so hands-on familiarity from an actual musician and recording artist helps (and he has spent years designing and building amplifiers). Second, since analog technology (to date) is unable to capture all the acoustic complexities possible from a speaker, Thomas has implemented a digital process called Convoluted Technology to ensure exact replication. These replications have something for everyone, from pristine cleans to Metal cabinets. The sixteen cabinets are from Thomas’ collection and include two of his own creations (NanoCab and FatCab), Roland Jazz Chorus, 1957 Fender Tweed Deluxe, Fender Princeton Silverface, Fender ’64 Vibroverb, Fender Twin Reverb, 60s Fender Super Reverb, a Vox AC30, several Marshalls (1965, 1970, 1971 and 1980), a Park 1967, Mesa/Boogie Rectifier and a custom 4x12 with Celestion Classic Lead 80s. The accompanying demo goes through all these options with clean, crunch and high-gain tones. The Mic Position makes the BluBox a no-brainer in achieving a quality mic’d cab sound, and the Mic Position makes it possible to add some deep end or high end to match your tastes and your gear.

GENERAL USE:
The BluBox was designed as a speaker or cabinet emulator IR (a cab with mic DI box) that can be used for gigging (going to an FRFR speaker or mixing desk) or for direct recording in a studio or via home computer. It operates on either a 9VDC or 18VDC standard (negative tip) power supply (200mA draw). The input can be the Line Input when running from pedals and a preamp or into the Speaker Level In when going from an amp’s speaker out (with up to 100 watts). Prior to powering up set the Signal Level to Low, to keep from clipping and causing damage – if playing level seems low you then can flip to Moderate or High output. The Clip LED can go on some of the time, but if it’s on constantly while playing then lower the Signal Level. Choose the Cab Type preferred (with several common and a few not so common) and then adjust the Mic Position for a preferred tone. A flat response has the knob at 12-noon, whereas more bass/low end requires turning the knob counterclockwise (mic toward the edge of the speaker) and more treble/high end requires turning the knob clockwise (mic toward the center of the speaker). The Line Out can go to a monitor speaker or headphones, whereas the Balanced Mic Out would go to a mixer (then to a PA system, recording device, etc.). There’s also a Ground Lift switch that should be turned on in the event of signal hum; this detaches the earth from the XLR output. It should be noted that the BluBox is not a load box, and that valve amps should never be used without load. There is a Speaker Level Thru for passing through the input signal, but the connection must be made using a speaker or necessary load resistance. Consequently, a speaker or load box must always be connected to the Speaker Level Thru socket whenever using the speaker output of a valve power amp with Speaker Level In. Other cautionary notes and setup diagrams are included in the user manual. The BluBox requires a 9VDC standard power supply (negative tip) while drawing 200mA of current, although it can operate with an 18v connection as well. It has ultra low latency (approx. 1ms) and includes an internal transformer to prevent hum.

OVERALL IMPRESSION:
Although the BluBox is a pricey DI/IR device, it comes with a host of quality German-engineered features. First, the cabinets/speakers come from the private collection of Thomas Blug, a world-class guitar player and recording artist. He hand-selected sixteen of his finest cabinets to accommodate anything from clean to Metal. He even included his two popular NanoCab and FatCab, which he developed himself. It does sound authentic and superior to DI/IR devices that may be half or one-third the cost, but you get what you pay for. The sound quality is very much how speakers respond and with fullness and breadth in tone you expect from an actual cab, and at a price of $299 USD you would expect a decent degree of sound quality.

Published on 04/08/16
On their home turf, Germany's BluGuitar introduce and demonstrate their new BluBox Speaker Emulator at Musikmesse 2016.

Listen to the 16 audio files about BluGuitar BluBox Speaker Emulator »