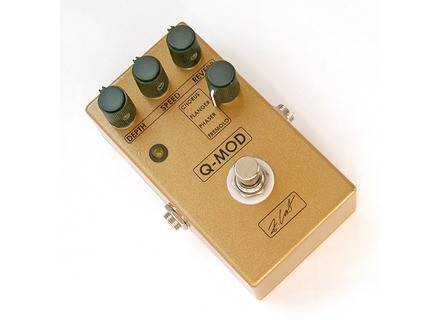 jcm050's review (This content has been automatically translated from French)" Super pedal! Excellent value for money!"

Z.Cat Q-MOD
5
Analog pedal true bypass
This pedal includes 4 effects: flanger, phaser, tremolo and chorus. You can spend an effect on the other hand only; the footswitch just turns the effect in action or off. There is also an integrated reverb

The connection level, nothing special, it's standard. To feed, you need a standard 9v battery or boss style plug as standard: in short, nothing insurmountable

The configuration of the pedal is super simple.
There are 4 buttons: firstly Depth and Speed ​​are used to adjust the depth and speed of the selected effect. The third button is used to reverb. Typically, I do not use (ie set to zero) because I use my amp reverb. Consider that if you want to use this reverb, it is cut by disabling the pedal, which is logical but ... So personally, I find that reverb is not very useful, but that's my opinion. ..
The last knob is used to select the type of effect: flanger, phaser, tremolo and chorus.
We quickly found a nice sound

The effects are efficient, clean and very friendly. The chorus is perhaps the least successful of the four types of effect of this pedal but it's still a good job. Personally, I use this pedal in position flanger, I play in the clear, or with a little crunch and there is a real killer!
I do not really have an opinion on the phaser, it is a fact that I do not use ...
The tremolo is very nice too, but another tremolo pedal, so I do not use either.

I bought OCCAZ in April 2013 and I have always. It is part of my pedalboard

This is one of the first analog pedals that I bought (if not the first ...). Before, I played on a pedal Boss ME30 and sound level obtained was not talking about the same thing. I chose this pedal for 4 effects in one pedal and ultimately, I do not use one, but I really like this pedal. The look is clean (this is the least we can say that matter!) And the effects are good.
I do not know if it is easy, but if you find one OCCAZ, it is very interesting to try!
Come on, I can not resist putting a small video story finally convince you: