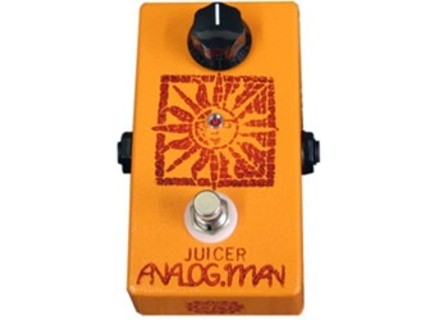 Analog Man Juicer
5
This is a basic compression pedal. It has a 1/4" input and output. It cannot be edited with a Mac or PC, and is not MIDI-capable. There are no other outputs on this pedal. It is an analog compressor with unique features. It is not rackable, it's a foot pedal.

The effects editing on this pedal could not be easier. It is simply one knob. If you want more effects editing, or to make the pedal a little bit more personal, you can open the circuit board and adjust the internal bias. The setup is basically really simple. Most people don't actually have to adjust the bias to make it better (I never did). The manual is pretty much pointless, except for the fact that it reveals how to adjust the internal bias, which might be difficult for some people.

I used to have a rather narrow-minded view of compression when it came to guitar playing. As far as pedal compressors go, I thought that it would be unwise to use one for rhythm playing. This is mostly because I was working with a compressor (or a few compressors) that weren't particularly suited to the kinds of rhythm tones I was happy with. I also tend to think compression isn't the best thing for a rhythm guitar. However, I was pretty happy with the sound I got with this pedal, especially with my Strat and Fender twin combo. It makes a great rhythm tone for R&B and highly rhythmic rock songs. WIth a clean tone, this thing can fatten up the sound without losing key frequencies, making it tighter without sacrificing tone. This is a very rare pedal in that respect, as one of my main beefs with compressors is that they frequently rob a guitar player of tone. With this pedal, that sacrifice is rarely made. This doesn't work as well for the guitar players who like to have the high, sustaining lead tones for great rock solos, there's plenty of other compressors that can do that far more effectively.

I like the unique way that this pedal suits a rhythm guitar player, and that it has a limited amount of functionality, to make for easy, quick adjustments. The sound quality is great for a particular type of player. I have played countless compressors, and own a few, and I'd say that this is a particularly good one for its specific purposes.

vegetablepredator's review (This content has been automatically translated from French)

Analog Man Juicer
4
This pedal is a clone of Dan Armstrong Orange Squeezer, a small box that is plugged directly to the output jack of the guitar and acted as a boost and compressor at the same time. The OS was used in scores of recordings of 70's guitar (the solo of Sultans of Swing ...), as well as a handful of bassists like Tony Levin.

The config is simple ... A volume knob and that's it. There is also a bias adjustment is inside the case which allows to set the "amount" of compression.

I use it on a low: there is a big "bwoump" has the attack of each note and the sustain is a bit / lot increases. It then compresses, ca also boosts (if wanted) and also adds a "grain" special a little vintage.
I was looking for a bass compressor that gives an audible effect, has opposed such a transparent comp adjustable in all directions. I tried the juicer in a parallel mag MULTICOMP of EBS, and the two are exact opposites: a Jazz Bass, the EBS "modernifie" sound and brings a potato marcusmillerienne, while the juicer is less precise (without be muddy eh), more rock somewhere. And it also boosts the volume of impressive way, there are also journals on the net that advise (for scratching) to a driver amp lamps.

I use it occasionally for several months. I like the sound it gives a bass, but it must be even more useful on guitar. Normally it is done

ca. It does not replace a versatile comp (I think also has to buy one), but as an effect that's pretty terrible.

Other Analog Man compressors/Sustainers for Guitar