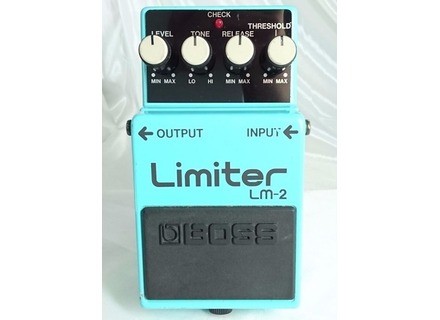 Boss LM-2 Limiter
3
Boss made this pedal back in 1987 and finished manufacturing of in in 1992. This pedal wasn't as big a hit to guitar players as it was to bass players. This pedal would set the limit on frequencies allow to pass through your signal. The effect would be more adopted by bass because the bass guitar would need more envelop filters effects than a guitarist would need to keep in those frequencies that would keep the low end humming and the highs to be passed through.

These pedal are now discontinued. The used market is the only way to go now. They have them all the time on ebay. They are fairly cheap to own. They have revised the pedal but they marketed it towards the bass players. So they usually have a "B" on the name of the pedal.

Boss LM-2 Limiter
5
The Boss LM-2 is an older guitar pedal in the Boss line that is a limiter/compressor. It is an analog pedal that has a 1/4 inch input and a 1/4 inch output and is powered by either a nine volt battery or a nine volt power supply. This isn't a rackable effect as it is a stomp box.

The make up of the Boss LM-2 pedal is really easy to follow and figure out as it simply has four different parameters. From left to right it has knobs for level, tone, release, and threshold. It is extremely easy to use this pedal and to get the tones that you are after in a hurry. Like most Boss pedal there isn't anything complex about this pedal and it shouldn't take users too long to learn everything about this pedal. I don't have the manual for the Boss LM-2 so I don't know how well put together it is, but it really isn't necessary as the pedal is very easy to use.

The sound of the Boss LM-2 is extremely clean and warm sounding overall. The sustain that can be gotten with this pedal is the best part of it in my opinion, as it can last for days if you set it right. I use this pedal with either a Fender Strat or a Gibson SG plugged into a '76 Fender Twin Reverb amplifier and I find that I can get some pretty awesome tones with this configuration. I've never used the pedal with anything besides guitar, but it would probably work fine with any other type of electronic instrument.

I've been using the Boss LM-2 for about three or four years and I can't understand why Boss would discontinue this pedal. It has a killer tone and is pretty versatile for a limiter/compressor pedal. Not only is it perfect for sustain, it also can provide a nice deal of crunch or can simply be used as a strict limiter. Since they no longer make this pedal, it is somewhat rare and the prices can vary, but if you are into vintage Boss pedals this is a must add to the collection. Overall, the Boss LM-2 is an awesome limiter pedal that is a must try for those who love the Boss collection.

Boss LM-2 Limiter
4
First of all I wish prciser I'll explain the minutes of the pedals with my words. I'll try to put it simply, we know the subtle effects of this kind, so let's be clear. Purists: Do not read this! lol
Classic pedals, a boss, to say nothing solid.

The use requires a certain ear, a certain approach. I had the chance to try it through a friend who bought it at random. She told me more.

Trs trs is subtle in dpart mean the diffrence is hard when the pedals triggers .. one wonders if it really serves.

Ralite and I always wonder if the format is really useful ... PDAL

PDAL this limit, as the name suggests, the volume has a certain point you set.

She smooths the volume during a arpges (I think a Metallica Nothing Else Matters by exemle ...)

But frankly for guitarise trs is a useless pedals. I said well: Useless! mdrr!

Where they would spend less, it is homestudio.

When (and c'tait my goal) I plugged in and I made a decision to guitar after a while the flanger ... and saw the ame level ever taken!
When I recorded the voice and saw the peaks disappear I thought: "Wow! It's cool!" lol
It becomes a useful trs recording. She saw the peak volume effects or voice easily adjustable ... It makes your decision cleaner ...

It's a subtle effect trs takes time to adapt and comprhension effect.

It will serve more home studio for the game on amp.

The same effect in it is of good quality and does its job without any problem.

Other Boss compressors/Sustainers for Guitar