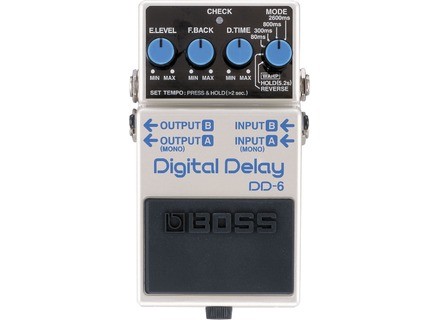 Boss DD-6 Digital Delay
5
Got it off musicians friend for 130ish, plus another 30 for power, cable and shipping. I wanted to start a pedal collection to replace my digitechs. Bought this as a start.

Amazing effects. In addition to standard delay [up to 2.6 seconds] its got a bunch of neato tricks up its sleeve. Reverse delay is amazing; plays your solo backwards! And a warp mode that lets you just build up a wall of noise as long as you keep your foot on the pedal. And my personal favorite: set for 80ms mode, longest delay time, most feedback, low volume and it creates this howl that you can manipulate with the time knob...I use that for a drone sound to riff over.

I originally thought that the reverse mode would just alter the dynamics of your playing to sound like it was going backwards. I would have liked that as an option. Also, a way to keep the delay going while playing something without being delayed would be cool. But without those features its still a great pedal and I really dont have anything to complain about.

Great pedal. May seem like alot of money to put down on one pedal, but I have no regrets about it.

Boss DD-6 Digital Delay
5
I got this little puppy from Old Town Music in Portland, OR for $130 brand new.

If you're looking for some good delay, then this is the pedal for you!! It has delay up to 5.2 seconds as well has reverse delay (sounds just like hendrix), warp, which is a cool feedback-like feature, and also hold mode, which you can basically record 5 seconds of a chord progression and jam along to it. You can also tap the tempo of the delay to the song youre playing!

Batteries go pretty fast, but just get a power supply. Also the small fact that I personally might not use ALL of the features, but other than that, no complaints!

Well, its a Boss... otherwise known as a rock.

If you want to get into some mean delay, this is the pedal!

Boss DD-6 Digital Delay
4
This pedal was the expansion of the Boss DD-5 pedal. They started making these back in 2002. These units had a ton of features in a small compact pedal. Sometimes too much which make Boss rethink their strategy on these pedals. Later Boss would simplify the modes operation from 11 modes to 6 modes in the newer Boss DD-7 installment.

On this installment of the delay family from Boss, they have increased the delay time by double, bringing it up to 5200 ms of repeats time. They also update some of the options to include better performing reverse mode. Not much else change as far as tone wise for the delays. Still a great sounding digital delay like the DD-3.

This also features a double input for running other effects in the pedal for stereo usage. You can also press and hold the footswitch for 2 seconds and get a tap tempo setting. this was great update because the last installment of the boss DD-5, you had to hook up a separate foot controller to tap in the tempo. This simplified things to one pedal and save time and money and also foot room on your pedal board.

Boss finished manufacturing of this pedal back in 2008. You can find these pedals in the classifieds and on ebay all day long. I have seen new ones fetch about $170 on ebay and used ones go for right around 4120. not a bad rice for a great sounding and over designed digital delay pedal.
Did you find this review helpful?yesno
»

Boss DD-6 Digital Delay
4
This is delay stompbox with stereo in and outputs (1/4") which is powered by standard boss 9V adaptor or a 9V battery. It has four controls which are E.Level, F.Back, D.Time and Mode. There is a footswitch to engage/disengage the effect. The footswitch can also be used to set the tempo of the delay.

I found this pedal quite simple to use despite having a quite large range of features. Can be run in mono simply by plugging your guitar into input A, amp from output A and a 9V battery in. I find all the modes simple to use with just a bit of fiddling. The only mode I find difficult to use is the hold mode as I find it hard to time but I'm sure with a bit of practice I think I could use it okay. The tap tempo I also find a little tricky to use.

I haven't tried to use it in stereo so I can't comment on how easy it is to use like that.

The repeats of this pedal are crystal clear which I think lots of people will like but I personally prefer the sound of dark analog delays. I find the clear repeats mean the sound can come a bit cluttered.

I really love the reverse delay and warp feature of this pedal as it provides some interesting non standard delay features.

Overall I think this is a great pedal if you like the sound of clean digital repeats. It has a large range of features and takes a small amount of pedal board space.

One thing I dislike is about this pedal is the buffered bypass as I find it has a large negative impact on the tone in my rig but it can definitely be very useful for long signal chains.
Did you find this review helpful?yesno
»
Read the 14 user reviews on the Boss DD-6 Digital Delay »