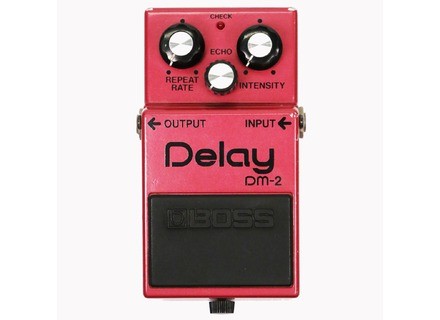 Boss DM-2 Delay
4
One of the most highly sought after used pedals on the market. These pedals made a huge splash back in 1981 when it was first released. A good analog delay pedal can do wonders go a lead guitar player. This isn't going to be a cutting delay like a digital delay but rather a tone enhancement delay that beefy up either your overall tone or helps with solos.

You get three control knobs for adjusting your tone. First there is a repeat rate control knob, which gives you the amount of repeats you hear trailing off from you playing. Net you have an echo and this is how much time you delay the delay to feedback. Finally you have a intensity which give you more of the pedal.

This is a fantastic sounding delay. One of the best pedals that Boss ever created. Is has a great analog tone that mixes very well with your current guitar signal. I use analog delay a lot on your tone and this one is one of the best. It can be a bit noisy depending on which edition you got. This pedal had three chip replacements during its life span.

It sounds great for lead playing in my opinion. It really adds a dimension to your tone that allows the guitar to expand more in the mix. It is a subtle tone additive but a great one to have on your rig.

These pedals were discontinued back in 1984 just at the height of metal mania and the start of the chorus effect on the distortion tone rather than the analog delay. These analog delays fetch a nice price today even the ones that look like they have gone through a wood chipper. I have seen them on ebay for anywhere between $250-$300 depending on the condition. My opinion is these are great sounding but obsolete. I like the Wampler analog echo as my all time favorite analog pedal and it is true bypass. Today technology has the upper hand on yesterday's tone.

Boss DM-2 Delay
5
After years of searching, I finally found one of these Boss Analog Delay pedals! While Boss's digital delay is it's more popular cousin, I find myself going back for the analog tones quite a bit. This pedal is one of the best Boss has ever made and it's easy to see why.
It has a 1/4" connection and an input for a power supply. It's an analog pedal and can't really be controlled with any computer or MIDI devices. It's also not rackable as it's a foot pedal.

This pedal is really easy to use, as I've found most of the great classic pedals are. This one has some interesting controls for a delay, I haven't really seen them on any of Boss's digital counterparts, but it's still pretty easy once you get the hang of it. There are three knobs for repeat, intensity, and echo. While the terms are unfamiliar the basic function will make itself obvious to anyone who uses it for more than a minute. Thus the need for a manual is pretty minimal, I didn't have one and I had no problems using it.

This is one of the best sounding delays I've used. I love how warm it is compared with the DD-2's iciness. That being said it doesn't muddy up the signal too much like other analog delays I've used. It in fact tends to make lead lines clearer and more prominent when jamming with a full band, which is one of the reasons I really wanted to get it. It can do anything from a mild support of tone to a full on spacey, trippy sound like Pink Floyd, or even My Bloody Valentine if you've got enough distortion. It's really pretty versatile and never annoying like the sometimes overbearing digital delay that Boss makes.

This is a pretty awesome analog delay. It's really not cut out for anything crazy, so if you're looking for crazy noise effects or spaceship sounds, this is probably not the best one for you. You can get some mild wackiness out of it but overall it's more straight forward. That being said, the tone is phenomenal and it really complements your sounds nicely. It's not easy to find an original copy of this nowadays, I happened to find one at a used music shop for a decent price but I don't think most people will have such luck. If you can find one of these and can afford it, by all means, get it! Even if you don't like it you'll probably find someone who will and will pay good money for it!

Boss DM-2 Delay
The Boss DM-2 is an analog delay pedal suitable for electronic instruments of all types. This has become quite a well known pedal and is highly sought after in he industry because of its warm tone. It has a 1/4 inch input and output and is powered by either a 9 volt battery or power supply. It isn't a rackable unit - it is a stomp box.

Using the Boss DM-2 is a fairly easy process as it merely has three knobs to control your tone. The pedal has parameters for repeat rate, echo, and intensity, and while these aren't the basic parameters you would find on a delay pedal, these are more than enough controls to use this pedal and only adds to its unique style. After playing around with the Boss DM-2 for a few minutes I was able to understand exactly what everything did without any issues. I don't have the manual for this pedal so I don't know how helpful it is, but the pedal is easy enough to use on its own that it isn't necessary.

The sound quality heard from the Boss DM-2 is incredible. It is really warm and vintage sounding while maintaining a great deal of clarity. I usually use this pedal with a Fender Strat and a '76 Fender Twin Reverb and I'm always astounded to hear the tones that are capable with this pedal. This has become one of the most sought after delay pedals out there because of this brilliant tone.

I've been using the Boss DM-2 for about a year and a half and it is no doubt one of the best delay pedals that I've ever had the pleasure of using. Whether you need a pedal for recording or live shows, this pedal will do the trick and then some. Since they aren't easily accessible, the price has gone up over the years and is now one of the most expensive Boss pedals of this size out there. However, if you are looking for a classic delay sound regardless of price, the Boss DM-2 is the way to go.

Fanch22680's review (This content has been automatically translated from French)" A pearl!"

Boss DM-2 Delay
5
Boss DM-2 Analog Delay, Made in Japan between 1981 and 1984. There are 3 versions of the chip used but the circuit is more or less the same. The DM-2 version 1 is different from the last 2 because it has a distortion of 1% against 0.8% for the other two. The last two also generate slightly less delay time, but they sound more or less the same. Unfortunately this pedal is very rare and very very expensive (250 € on average) on the second hand market because it sounds nothing like a Digital Delay, and apparently sounds a little better than the DM-3. It is very robust, is a quality circuit, has three knobs, and is&nbsp; Fuchsia in color (superb!)

As has been said by another user, it is not a delay to do everything, because it is relatively short, but all the same long enough for good solo or very melodious arpeggios. So it is still very versatile, but everything depends on what one expects. Using it is very simple. The different settings are really very effective! I use it on a Blackstar Artisan 100 (Plexi equivalent) with a Hagstrom <span class="skimwords-unlinked">Swede. With</span> either clear sound in rhythm or solo, it sounds really great. Coupled to an analog and a good Overdrive Rotovive are obtained sound sublime!

It is not a lambda Delay .. By using this kind of pedal, you'd better know what you want to do.
If not, it's a quality Delay! Analog, the boss MIJ, so it's hot, it sounds, and it is indestructible. Using it with a CS-2 of the same vintage is a treat! Pink Floyd you know? ben voila!
I also have a Made-in-Japan DD3 which I could make a comparison with the DM-2, which regulates the same.
The delay of the DD-3 it seems to rise in acute frequencies with a slightly metallic color. And DM-2 for the reverse seems to descend the delay in the bass, it is fatter, deaf, and round .. It is beautiful up there end!
In short, they do not meet at all in the same way ..
The DD-3 being a bit of a delay to do everything .. with a different color, they prove to be complementary to both not necessary.

€ 30 bought 3 weeks ago ... (Jfais side of those who use it to those who will sell 10 times more than one week after ...) Need I say more! I despaired that to get your hands on one day can be a DM-3 for a price resonnable (about € 90/100).
I find myself filled with archi superior version of the latter than I thought just never possess one day!
Thank you again to the person who sold me of not being back in the game of auctions of people who appellées behind .. He has offered up to € 250.
This is not the first time I made the shot ... I often lose resortais unfortunately .. I have not the means and pretensions of some!
Fortunately there are still people in good faith with the principles in this world!
As they say first come first served! Raz's ass in these selfish well-filled leaves door still trying to acquire an object sold already doing all they can to influence the decision of the seller by telling him stories ptites!
A good lesson for those concerned that I have no doubt banging the head against the wall just past and those who sell at prices disproportionate just because it's "Vintage" (it's just the old technology, an era when it was known to still functional and indestructible stuff)!
So yes € 30 and it is like new!

Did you find this review helpful?yesno
»
Read the 8 user reviews on the Boss DM-2 Delay »