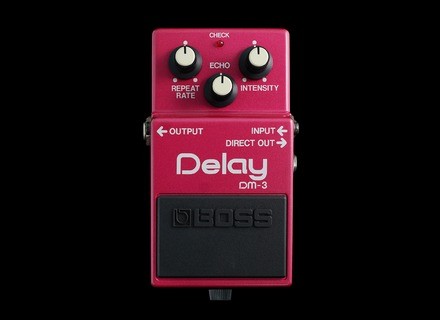 Boss DM-3 Delay
4
The is the second edition to the compact analog delay pedals from Boss and the final one that Boss would ever create. This pedal saw some changes not only to the inside circuit design but also the inputs/outputs and the a different cosmetic design. This was the only pedal from Boss that had these unique looking control knobs. The were kind of a mixed between the usual control knobs that Boss carried on their various pedals. You also got a stereo output though not labeled as that would be able to create a stereo sound. On the inside it got an overhaul to reduce the noise in the circuit. As well as some filter changes to the effects. They began production of this pedal in 1984 and ceased in 1988.

This was a good pedal and a much more user friendly than the previous model the Boss DM-2. User friendly in the sense that is cut the noise of the pedal significantly and allowed the use of s stereo effect. The control knobs did not change a you still have the three knobs for repeat rate, echo, and intensity.

This was a great pedal back in the day. It added a good solid analog echo to your tone that didn't cut in the mix but rather added anew dimension of tone to your guitar's current tone. It blends with your distortion very well and colors the tone to expression more of the notes of your guitar.

These pedals seem to fetch more of a price than the previous Boss Dm-2. They are going for a few bucks more than I have seen the DM-2's go for. On ebay they seem to sell fro about $300. This is a pretty penny for a used pedal from back in the 80's. I would search the forums and get a good consensus on what the best analog pedal that is produced today. I personally like the Wampler analog echo.

chicochic0_0's review (This content has been automatically translated from French)

Boss DM-3 Delay
5
Boss pedal (I recommend) to delay, so a good echo. Pedal with an analog input jack (6.35 mm jack in all), output jack, another output which I still have not found the true usefulness. Connected with "live out", the pedal does not work.
The location of the battery is located under the hatch and there is also a jack for a 9V adapter (use only the adapter boss).

Configuring more than simple: three knobs but be careful if they are pushed to the maximum all means a high-pitched noise and I suggest you all down quickly to avoid damaging your ears.
It is the first "repeat rate" which, as its name implies, determines the number of repetition of the echo
- Then the button "echo" that rule is not much more or less power
- The intensity adjusts the intensity!
My advice: an echo and maximum intensity and minimum repeat rate
I put 5 as the repeat rate is only used to make a shrill sound to more than 3.5.

The sound quality is excellent. that's all I have to say