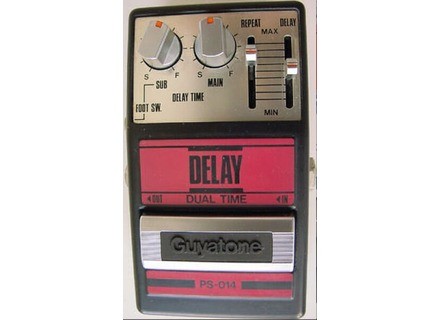 Two speed settings of delay, then the rest is simple.

Having tested an unimaginable number of delay, here is the pedal that is closest to the boss dm2, prettier than its dm3, and much nicer than any other analog delay that I could test (carbon copy, Ibanez AD9, mooer ...). Here is a true analog delay that beats with a true vintage sound. and of course the opportunity to "start to spin."

It is in my pedalboard with the DD7, and she will still be a little while.

Guyatone PS-014 Dual Time Delay
5
It is an analog delay vintage Japanese BBD (MN3205) perfectly typed 80&#39;s. Classic stompbox cast zinc alloy case, as many other guitar effects at the time. Built like a tank!
Aluminum facade reported for controls, black epoxy paint around the case and to the upper panel around the Bypass button, a pretty dark pink almost plum, akin to various shades of pink competitors (Boss and Ibanez, by example). That way, you will understand the first glance that this is a delay!

Two jacks 6.35 classics: IN & OUT right to left (see photo).
An additional 6.35 jack next to the marked FOOT OUT SWitch.
A power supply socket type Boss (classic 9V negative center).
And of course a battery cover below for the single 9V battery ... Phew no 18V to fear!

Well, that&#39;s where we note the specificity of the beast: TWO settings "Delay Time" by rotating and "MAIN" buttons "SUB", and two small straight marked "Repeat" and "Delay". Repeat the injection and adjusts the delay mixing dry / wet.

But now, the originality of this pedal is that it has TWO speed settings of delay, switchable by an external pedal SWITCH type (or with a single footswitch. Yam an FC-4 is the case for the momentary, but you can also recycle old foot switch your amp for that). A standard mono jack plugs into the FOOT SW entrance, and you simply bypass the tip and sleeve to switch between the two settings.

The "MAIN" is the default, and "SUB" is only active when the switch is engaged. It can switch to a short delay to a long delay (rhythm / solo?) ... Or engage the toe well filthy and delirious infernal loopback for a solo, and then release the switch and instantly return to a delay much longer and cleaner without having to hack the speed hand on the listbox ... Powerful, right? In any case, very often ...

Okay, so now its the ... I used it with synths (analos, of course), not guitars, but this beast was damn character, it shows! Musicality and warmth of good Japanese analog BBD delays in the 80s so sought are present all the two, no doubt about it!

The sound character is very close to the famous Boss DM-2 and DM-3, with perhaps a bit more gloss than the DM-3 ... But comparatively better defined and less messy than the Ibanez AD-9 or AD-80 (I had too), for example.
Serious conservation is perfect, with a slight bump in the mids and low-mids (clearly audible on a long delay), but it is especially acute that are less attenuated than in other delay pedals that I &#39; had heard at the time.

On a guitar, we find out the sharpness of the pick attack in the early echoes, and there is a low or loses the bite of a slap on round nets or roundness and thickness serious . Well, the bandwidth is not that the HiFi, but it is extremely clear with a musical machine that does not alter the quality of the instrument, whether it be a guitar, bass or analog synth.

Technically, the electronic circuit is also almost identical to that of the DM-2, with two to three components near (a few resistors of different values), and there is a lot of potential for setting inside (feedback, speed, etc ...) who want to explore the limits of the beast in hacker warned ...

In any case, it easily and without shame bears comparison with the Boss DM-2 and DM-3 and in my opinion surpasses the Ibanez AD at the time, with the trick of double speed and more!

I listened to a lot of other delays at the time, pedals and rack more expensive or pseudo-racks (Ibanez, Korg, Roland, EHX, etc ...), often but not necessarily more efficient in terms sound quality ... It was she who gave me the best quality / sound / price at the time, without forcing me to sell my car to pay me.

I love his musicality and well-typed grain analog 80&#39;s (without drifting towards the sound either boiled some vintage delays to BBD). His ability to "spin out of control" anyway, but with progression and finesse (... at least mine does, with its internal settings, which now seems very popular). Its two-color LED (green / red) that allows to spot in the dark even when it is in standby. Its sturdy construction and its great build quality (Made In Japan the "good years") ... Oh, I forgot: the 9V power, and of course the dual delay setting, of course!

I like a little less that what is not true-bypass, like many others of that time, also, but it was for an inter muffler bypass!
Here it is: more power supply, more sound :-(
But ... we could fix it with a soldering iron shot, no doubt!

Despite this, we can still notice that the signal difference between bypass or effect on (with the maximum dry and wet zero, of course) is very small and no particular color either ... It&#39;s something!

If I would do this choice? At the time, without hesitation!
Today, things have changed a bit: I do not work in stereo with my synths, and I have several racks stereo effects and / or multichannel giving me any satisfaction both from the point of view of characteristics of their sound ...
While this pedal does me more rarely and for a very specific use ... Besides its stompbox format me not render handy in my studio in the middle racks and patchbays ... I keep it as a souvenir of a particular time.

Last detail: it also exists in the NADY brand in other countries, it seems ...