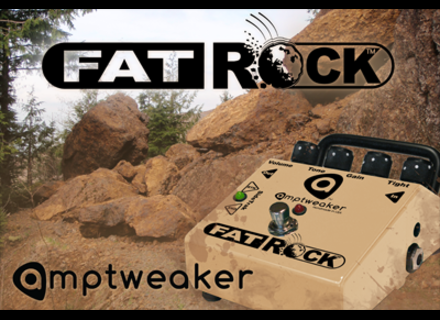 The FatRock pedal is based on the TightRock distortion and includes changes requested by the users of the first version who wanted a warmer effect with higher performance with brighter guitar or amp tones.

It features the same functionality as the TightRock, but the Tone and Tight controls now have an extended low-end range. A fixed Fat boost has been included to smoother the attack with a post-EQ low-end boost.

Also new on the FatRock is an addition SideTrak effect loop that is off when the pedal is enabled. You can use it to add a compressor or any other effect or chain. The original effect loop is still present with its pre/post switch.

Second pedal introduced today at NAMM is the Pro version of the TightMetal distortion pedal, which now features two Boost controls, one before and the other after the distortion, so that you can boost both the gain and volume. A MidBoost button is also preset and works with the output Boost control.

Amptweaker also listened to the users who didn't like the sound of the original pedal and included a Smooth switch for added warmth, and two Fat switches for tighter attack sound with a little more compression.

A 3-band EQ is also new on the Pro version, with a Thrash button dedicated to the mids.

The pedal retains the noise gate and its Chomp parameter from the original, with internal settings for the gate.

The TightMetal Pro features three effect loops: one "universal", an active loop with Boost and the Amptweaker SideTrak which is off when the pedal is on.