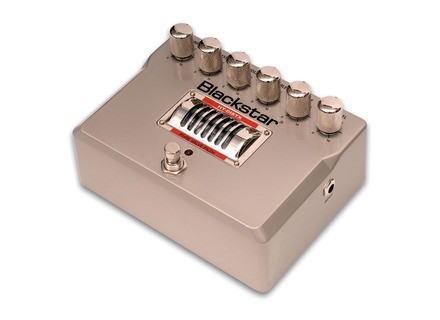 HT-DistX, Distortion from Blackstar Amplification in the HT Pedals series.

Blackstar Amplification HT-DistX
4
Blackstar has made a huge splash on the amp world in recent years. They have made great sounding fantastically priced amps for the masses. The price is what is so amazing to me. The amp sounds so very good and to keep their prices for a multi-channel combo like this under $1000 is remarkable. Blackstar has effectively used a great design as well as superb marketing which has enabled them to produce a great quality and sounding amplifiers. Many touring and professional artists all over the globe are now turning towards Blackstar for their guitar amplifier needs. The have successfully taking a huge niche in the market over the last few years. To add to their prestige they have included a whole line of distortion pedals as well.

This pedal is almost a full preamp in a pedal form. This pedal has gain, bass, middle, treble, ISF, and level. This is pretty much the exact same control knob front panel as many of their amps. This has a speaker simulated output which is also on their regular amps. So this pedal is basically a preamp peal. This pedal takes what the regular HT-Dist and brings it to a whole new level. That pedal had some gain to it but this one is just completely over the top!

This pedal is basically a preamps. It has all the control knobs as any other Blackstar amp would have. It also has a simulated speaker output for going direct into a recording session. This pedal is essentially a foot pedal preamp. Not a preamp box that boost your signal like a Boss Fa-1, but an actual preamp like a Triaxes or ADA MP-1. This will boost your signal or give you ultimate in uber metal gain distortion.

You can pick these peals up new for right at around $199, which is not bad for a great sounding preamp pedal. I would recommend this pedal to anyone who has a clean amp and wants a super ultra mega load distortion high gain tone out of that amp. You get a great sounding tone and for not a whole lot of money. This is one of the most forceful and ultra gained out pedal that I have ever heard before.
Did you find this review helpful?yesno
»

This is definitely not a simple distortion pedal, but is actually pretty straightforward to use. You get a full three band EQ, which is really nice, so dial it in just like an amp. In fact, the whole thing works like at amp.

I've heard some concerns about dealing with the tube failure or replacements. Shouldn't really be a problem at all, it is seated very well, and replacement shouldn't be an issue. If you aren't familiar with tubes or tube amps, just take it to a tech.

These do need to be used with an adapter which can be a little bit of a pain. I like to have my entire board running off of one power supply.

The ISF knob (Infinite Shape Feature) is probably the coolest sonic sonic component of this pedal. It basically allows to you to control the voicing of this amp, between British and American, and anywhere in between. As far as I know this is unique to Blackstar products and is very useful.

Unlike a lot of pedals that run tubes as a gimmick (I've seen some lit by an LED before), this one runs the tube at a full 250-300 volts, and actually uses both sides of it to clip the signal. It actually does sound like tube distortion. Very full, thick, crunchy.

This isn't really an OD or boost, you are going to want to run this into a nice clean platform with a lot of headroom.

If you are after a convincing high gain distortion pedal, this is the one to buy. Real tube distortion at a pretty reasonable price. It dials in, sounds, and reacts like a high gain amp. The fact that you can switch it between and across American and British voicings is a great bonus.

But I really like this one, definitely recommended.
Did you find this review helpful?yesno
»

Anonymous 's review (This content has been automatically translated from French)" GENIALLLLLLL!"

Blackstar Amplification HT-DistX
5
everything was said

configuration is super simple. manual, have the look, a liver to give an idea.

the effect is very effective, especially when changes have lamp.
I put a ruby, are much less rough than the original bet more defined.
I play with a gibson sg standard old version.
I personally prefer us are

its been 2 years that I use, and I'm not above.
I try the uber metal, the metal box, metal fulbor I, I leave, to rate and I sold the metal muff that I too, and I use, which is highly complementary with blackstar
I love everything about this pedal, and I will do it again without hesitation choice
report taken unbeatable

Blackstar Amplification HT-DistX
5
This is a distortion size pédal with 12AX7 (Sovtek original).
The pedal is huge, made of metal (we just jump in with both feet above) with its own power supply (12V). The footswitch is silent.
Settings: gain, bass, middle, treble, ISF Level.
An output "emulated output".

I do not remember the manual. Is it necessary? ... A little anyway for the ISF.
The effect is very effective and easy to adjust.
Want a big distortion: here's one.

The distortion is very beautiful very hot (thanks to the lamp) it goes from "a little dirty" to "clear and precise" with ISF or, to paraphrase, "the British style to American style." All those who seek a large distortion will get their money (it is not among the least expensive).
I have long used the original and I ended up changing the lamp and told me she was starting to tire operation since almost 100% of the time. I put a Tung Sol. I personally did not feel the difference but do not rely too much in my opinion on this point.

I used it for 4 years.
I had a Boss loan once (do not ask me why), I have a DOD Attacker, a Digitech pedal RP7, the distortion of my Marshall VS100, the crunch of my Blackheart BH15-112, I have a a Zvex Box of Metal (which I sold because I found it too artificial), I have a Maxon D & S. (More or less in chronological order)
This is a good distortion pedal (the best I've had in my hands). It's solid, built to last. It is a little big and it says it needs its special power supply.
If I had bought myself one, this is the one that I would even if it is a bit expensive.
That said I bought a more consistent head shot I need ...
If you have the means and the need for a versatile distortion pedal size is frankly good stuff.

Did you find this review helpful?yesno
»
Read the 16 user reviews on the Blackstar Amplification HT-DistX »