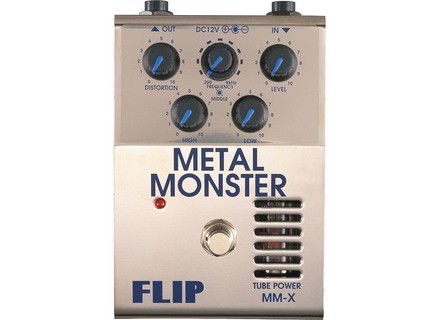 MM-X Metal Monster, Distortion from Guyatone in the Flip series.

asyd's review (This content has been automatically translated from French)

Guyatone MM-X Metal Monster
5
Everything t said ... it's a good pedal (lamp), not a multi-effects.

By L against, it has something to say ... it's MONUMENTAL!
I quite possde distortions (Mesa Boogie V Rocket, MXR Dime Distortion, Micro Metal Muff, Marshall Shred Master, tube screamer, plus distos the Boss GT-PRO), and although none worth the Wheels of Terror.
This pedal is really above the rest, the sound is nickel: add a compressor, a high-cut filter and it is perfect, nothing else needs to have a clean, powerful sound.
Moreover, this pedal is very versatile, we can go from blues to metal without problem and always with a superb quality.
Whether with my Start 'or my Les Paul (active EMG 81 and 85 as the master Zakk Wylde) has sounds great while keeping spcificit sound of each guitar. And of course connected to a tube amp and a 4x12 cabinet ... We find ourselves wrapped in the middle of this beautiful distortion ... It is hot and dry time.
Like what lamps still aurront top ...

I use it for 4-5 years, as cit above I have a lot of other distos, I also tried a sacred number in the last 15 years but not a arrives ankle Flip Monster.
If there is indeed a pedal that I never resell this is it l.
Edit: well if I finally sold it, but for some reason chgt config ', and in need of funds, I'm sure I will regret later ....
Did you find this review helpful?yesno
»

The config is very simple, managing parametric midrange demand still some time to adapt when you do not know.
The knobs are really effective over their entire range, even if the gain of an issue already settled three sacred sauce with a micro active.

Degree of parametric pocket, we manage to spit out any style of sound this pedal.
It is not dedicated to the metal, the sound depends greatly on the guitar you have in the paws, especially on the type of microphone you use. With assets of type 81, 3 Gain on tape already in records old school thrash, with a double liability, we find the same sound with the gain set to 6 / 7. Not tried with single coil pickups.
To make it sound less violent on record, just down the microphone volume, the beast continues to sing without loss of quality but less aggressive. We can go down to the rock muscular, less than that I have not tried.
the thing I like in this pedal really is the attack of madness that it has the grain on mute to "scratch", and timbre that can go from ultra dry to round type 5150 hardcore to Hatebreed.
Lamp colors the sound so it's true, I have received from the former owner with a EHX in the trunk, and all the lights I've tried is the one with the largest dynamic in attack fairly dry and ultra tight grain. (Right now, I opted for a GE in January that offers a bit less violence in attack and a slightly less tight grain too)
As against it must be borne in mind that this is a light mix / transistor, and it shows. After 5 / 6 on the gain, we keep the side "tube" sound with more distortion on one side transistors "randall" who go out more and more of the mix, and honestly, it EXCATEMENT the sound I was looking for. It's a little accident that I found but what happiness. Find a head that will get me out the sound (except the new series Randall RV, V2, T2 etc ...) is almost impossible and certainly not for an investment so small.

Used with a Johnson JS910 EMG81/85 and equipped with a Dean ML79 L500Xl equipped with Bill Lawrence bridge, stock (Dean Zebra) for the handle.
I use this pedal on two pure transistor amps clean channel (Marshall 8240 and H & K Warp 7 head)

Used for 4 months, I have a banana as always crazy when I turn it on. The 8240 has a stereo chorus for his 2x12, and this distortion with the Guyatone oats really severe.
I tried a lot of models, but this little beast is the devil really has!
Assets: All
Cons: the input / output jacks original females were bitten by oxidation (10 years even when the pot) and caused a bad contact, I decided to change and it is left as 40. I analyzed a little circuit and other components, the rest is aging very well, no need to worry.
Choices to make and remake my friends!

Agarwaen's review (This content has been automatically translated from French)

Very easy to use, turn the knobs, and found very easily sound that one seeks.

I use a marshall 100dfx and ca fart a lot. I am in a group of thrash, and this pedal is perfect for large distortions good riffs and precise. The range of sounds available is very extensive with the parametric mid knob, one can only find the sound you seek.
The lamp allows for a sound that is warm and that stands out among the other instruments.

I use this pedal for 6 months, and I'm very glad I bought it. Yes it is hard to find, we can not get the opportunity that I think. If you see one, lean over and try there, it's extremely good pedal for the price.
Did you find this review helpful?yesno
»

heinz's review (This content has been automatically translated from French)

Systm pr-automatic heating of the lamp.
A user manual Reduces its simplest form does no suggestion Submitted rglages and much respect for the constraints Obviously not dtruire his pedals.
5 knobs (distortion, volume, bass, mids, Aiges) that allow a broad spectrum of sounds trs: starting from a simple rglage, I pushed my Aiges 4 6 and I chang littralement type of sound.
But we quickly found his little his prfr.

If my transistor amp still gives her a little cold, the grain supply from the lamp "compensate" in some sense and gives a feeling ... how to explain? I had a Boss Metal Zone before (which served me a lot, I do not spit on it), but the diffrence of grain, depth and precision of the mediums and Aiges me leaves you speechless. My MT-2 will be a crunch of time.
I am now waiting to get plugged into an amp to see your exact lamp.
With the possibility of rglages, this is versatile pedals even if she has a penchant for large saturations (of heavy hardcore to post through the no, the death ...).

I test the cradle of metal line6, the Vox Bulldog, unfortunately not the behringer, but the flip MMX Metal Monster is, in my case, fits most (I play a sytle between post-hardcore and "good" nomtal <Deftones) than other pedals, and I can only advise you to try it (center of Paris has effect in BMD).

I've had five days, j'arrte not play and refine my rglages, I think it's a good investment trs. If c'tait again? I would.
Did you find this review helpful?yesno
»
Read the 13 user reviews on the Guyatone MM-X Metal Monster »