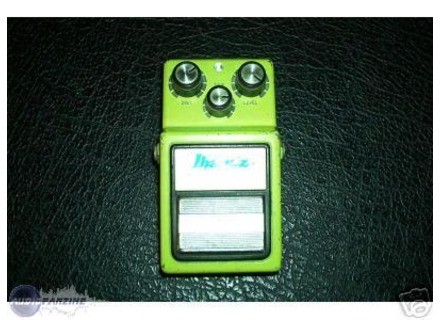 SD9 Sonic Distorsion, Distortion from Ibanez in the 9 series.

Ibanez SD9 Sonic Distorsion
4
The Ibanez SD9 Sonic Distortion is a pedal for guitar but can be used with any electronic instrument, although I'd probably recommend sticking to electric guitar with this one. It looks much like the other pedals in the Ibanez '9' series like the TS9 (Tube Screamer) and the AD9 (Analog Delay). It is an analog pedal and isn't rackable in any form.

The parameters found on the Ibanez SD9 Sonic Distortion are minimal and easy to follow. If you've ever used a distortion pedal before you'll recognize this make up - tone, volume, and distortion. That's all there is to the pedal and you'll see that it's a very popular configuration. There shouldn't be a use for a manual with the SD9 as it's super simple and easy to use.

While I can't say that the Ibanez SD9 Sonic Distortion would be my go to distortion if I had one (hence why I don't have one), it does have a unique sound that I can see being useful in some situations. It's a transparent sounding distortion and I'd guess I'd liken it to something like the sound of ZZ Top. It can get a pretty good amount of gain going on if you crank it up, but I probably like it best at a lower gain and for rhythm guitar parts.

The Ibanez SD9 Sonic Distortion isn't my favorite distortion pedal but I see it's value in a studio setting or if this is the sound you're going for, for your live set up. The pedal isn't too expensive, but I do think that for this price used you can find other more versatile distortion pedals out there. It's worth a try to see if it matches your sound as it is good at what it does, it's just not all that versatile.

SlapKid's review (This content has been automatically translated from French)" This is the new, 2012 with the mini-switches"

Ibanez SD9 Sonic Distorsion
5
Brand new, 2012, vol-tone-dist with two extra switches for mini disto range of mediums and the beach.
Zero residual noise, either the footswitch (but must press hard, then many more than usual) so I guess it's not true bypass (not so bad as this is not a buffer boss ...) .

Well, no USB jack, not making MIDI, making no head either

Simple and intuitive, easy on the volume that Degomme.
The switch puts the mids more serious and occurs also on its grain, then rockier-less smooth.
That the distortion is a second floor looks like it's more compressed compact.
The tone is effective is not a spectrum but a sharp cutter.

AND DO YOU BLIND loupiotte NOT! We see her well, she is orange 70's style stereo.

The slap. Transparent dynamic precise mad aggressive soft, everything is there.
The texture is generally in the direction of the boss ds1, in much better made. So flexibility and the presence therein, which is not at all the cass of orange hardwire valve distortion that tends to disappear at the same volume.

Sd9/ds1, she does not drool, filter out the serious (lets through only the useful), and especially do not collapse to attack each humbucker.

The soft mode SD9 sings, simply, it's so smooth and clear, I have no other pedal that does this (and I have a box full).
To accord with the hardwire (which handles furioso riffs) I put it in crunch (inter bottom left and right top) and it's perfect.

I also matched with a crunch pedal and set in contrast to the lead but it's almost a shame as the crunch is good.

This is the best! Sound enchanting, versatile and just in case.
I have not even paid dearly (less than hundred euros), this is the time before Christmas!
Go ahead, you'll be happy, except ...
if you play any (death metal, doom metal, nu metal, speed metal, thrash metal) ....!

SanSystem's review (This content has been automatically translated from French)" More than 20 years, but it does much tjrs"

It is his strong point. There's no distortion or cold austere, it's super warm and with a grain inimitable.
Basically it's the grain of the legendary TS-9 but with a big win.
Frankly it's overwhelming, impossible to not slam a few chords hard rock with the unit into place. ACDC and Trust are never far away.
Back to the boom years of the warranty Hard.

Very difficult to obtain, built only between 81 and 84, and quite a few models on the market. A rating goes up very quickly ... currently about € 130-150. But it's an investment, not to lose value on this kind of stuff.

The series of pedals from home TS9 Ibanez, from which the clbre Tube Screamer.
I possde A model who does original product from 1981 to 1984. She does rdite rcemment by Maxon.

Rglages classic for this type of effect: volume, tone and dist.
No complicated rgler to find a good sound. The range of potentiomtres is correct and allows for many possibilities.
The switch is of good quality.
Casing the robust and Aesthetics.

Trs good disto mdiums load. Quite aggressive, it may be appropriate in many styles connotations rock or even more hard but dcevra metal fans for its lack of low end and the grain too vintage.
The maximum gain is quite dense and sustain an acceptable trs.
The pedals also gnre trs beautiful overdrive when takes the trouble to exploit the possibilities of potentiomtre of dist.
The tone gives normment shine above the 6 / 10. What makes a snapping sound and trs aggressive, I like particulirement.

A trs PDAL I am happy to have in my collection. A typical grain and aggressive. The charm of the TS9 SERIES ...

I do not know if rdition by Maxon is the same ...

Did you find this review helpful?yesno
»
Read the 6 user reviews on the Ibanez SD9 Sonic Distorsion »