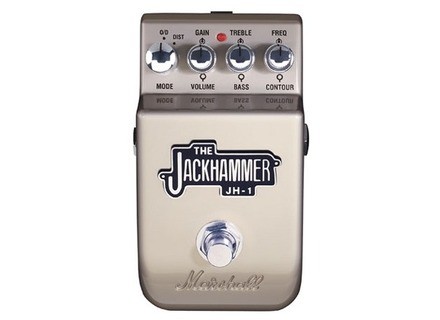 JH-1 The Jackhammer, Distortion from Marshall in the Effects series.

View all offers for Marshall JH-1 The Jackhammer »

Marshall JH-1 The Jackhammer
4
I am using it to boost some distortion to my guitar on the Marshal Mustang II (v2) amplifier. It does it well! Strong and rich with many ways to shape it up to your taste. Limit the overdrive channel of your amp to a quarter and start cranking up the distortion up to where you like it. It can be smooth and just enough to give some taste of distortion to your clean tone, or loud with a hard bite to make your shredding as angry as ever.
I do not use much its overdrive as I am happy with what my amp gives on it.

Marshall JH-1 The Jackhammer
5
A freind purchased from Michael's Music in Irving Texas for me.

Despite the fact that this is a tweakers pedal, it has numerous settings that produce solid Marshall bad a$$ sounds. They are warm even though this pedal has no tubes.

Perhaps that it doesn't have that much variation in sounds. Not enough to make a huge difference. I mean, it has an older Marshall crunch and a modern heavy sound, but no spectrum other than that.

Metal construction, not plastic. Very durable - gigged on and off for years with no problems or a backup. Very reliable.

This thing is awesome. I use it to get different types of distortion other than my Deville amp. Definitely recommended.

Its has a great distortion and overdrive sound. it has the lil switch thing bettween each mode so u have to pedals in one. the gain is great, you can go from a smooth bluesy tone with it at 8 o'clockish to full metal style gain all the way up. the contor and ferquencey conttrols give u sooo many sounds. seruiouly about 30 decent different sounds

you could throw it out of the window and it would work. the foot switch is a bit weak, you have to go easy on it, unlike boss

Marshall JH-1 The Jackhammer
3
I got It as a Birthday present, but I know that it was acquired from one man band, in Banbury, England.It cost £45 which is about $78.

It has a really good heavy metal fell to it when you're using it. It also has some great looks compared to most effects pedals (Iuse this term loosely)

I dislike the way that you cannot control how heavy the effects are, as it is merely turned on with a button, meaning tedious time spent fiddling with gain. Also there are two different effects (overdrive and distortion), which could be considered a good point... exept the fact that they both sound exactly the same!

Extremely good. the look and wieght are just right for a marshall product, it will take any amount of bashing,and will last forever.

A good effects pedal for begginers,but if its rapid effects mellowing and strengthening again you want then I'd shop around for something else.

This review was originally published on http://www.musicgearreview.com
Did you find this review helpful?yesno
»
Read the 37 user reviews on the Marshall JH-1 The Jackhammer »

See all 219 photos of Marshall JH-1 The Jackhammer »

View all 3 videos of Marshall JH-1 The Jackhammer »

Marshall JH-1 The Jackhammer manuals and other files