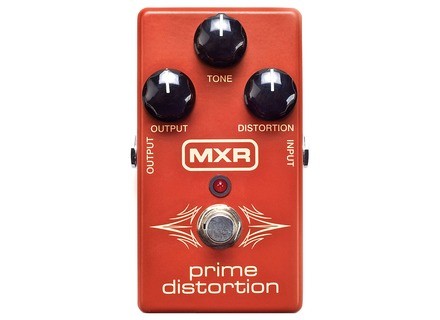 ringomayo's review (This content has been automatically translated from French)

MXR M69 Prime Distortion
4
This is an analog distortion pedal (transo), with in and out jack classical supplied 9v

It can not be simpler, a tone knob, a volume knob, a distortion knob, and a foot switch.

The reading of the manual is useless, it's stupid as rain use

I use an Epiphone LP Standard, original pickups, all in a Blackstar HT5 on the clean channel. I have a Vox Ice 9 OD I also used as a boost, the marriage of two (Ice9 in boost and mxr disto) works pretty well.

To return to the previous review, I'd say it's a classic rock sound, rather 80's or 90's. March well on AC DC, guns, guts of Led Zeppelin, Metallica to the limit. The sound is loaded medium, and grain rather rich, organic.

It does not stick with the hardcore metal, seems to me - it does. In any case I have the MXR Fullbore which is perfect for playing small singer with Iron Cross

I use it for a week. This is what I was looking for classic rock, at least it seems to me.

We have the same style of distortion on the HT5 (respect the character of the amp), but with a grain "tighter" and richer, so that the distortion + lead channel of the amp, which to me looks more a big OD. Pedal so take a dose of extra sito without killing the amp.

I had a DS1 before, I would say that this pedal is in the same tone, but with a fuller sound with a bit more possible gain.

I tried the yellow sister distortion and distortion + III (red) who seemed well below. Less gain in any case, nothing beats an OD or OD channel of the amp to sound crunch (ie loguique same time!)


Clearly, if you want to play Angus edgy or slash Version You Could Be Mine, it does. to death, take a look at the Fullbore

MXR M69 Prime Distortion
4
100% analog pedal, made with components sorted by mxr.
Brownish in color (some sees red!), White cream registration, all reminiscent of the vintage.
So for the rest: 3 potentiometers in mxr usual, quite large and serrated (I mean the cap knob), so quite convenient to move with the foot. The plus is that they are now phosphorescent, so on stage I guess it can be useful.
We therefore find the eternal level adjustment, tone and understood these three gain knobs.
Nothing to report at the input / output is classic, robust and true bypass. As usual with mxr. Remains the damn food, always inconveniently located for many of us.

Using this pedal could not be more simple.
It adjusts the volume of the pedal, the tone following what you want to hear and the same with distortion.
What's more?
It can combine with another of the same type pedal history coloring a little overdrive or distortion and the results, although random can be very surprising!
With the badass 78 'for example, it's great. At least if we do not abuse the gain.
Well beyond its conventional use, it will remember that it can also serve as a boost, including a crunch or lead channel.

Then plugged into my TubeMeister 18 with my Gibson lp equipped with a couple EMG 81/85, there is a typical hard rock of 80-95 years. ' So for those who want to metal, died. Mean by that sound to Guns n 'roses, scorpions, Led Zep ..
A rigor kill 'em all Metallica has provided you have mics high output level.
on the other hand with my Gretsch (a solid body equipped with two mini humbuckers) vintage rock sounds are affordable and very pleasing to the ear!
Incisors or velvety tones depending on the settings, as long as some attention, this pedal allows to many things!
From blues to hard rock retro, through rock and pop.
In addition, it responds very well to the type of guitar connected and volume changes that we will impose.

I finally step back on the pedal as I have for about 1 month.
However, it attracted me because of its ease of implementation, the wide variety of sounds and look very pretty!
Watch the official video mxr (he has two, one in active and one single), because for once they are representative and fairly accurate.
Be curious!
Bought € 40 used shortly after its release in Europe, the price / quality ratio is unmatched in my case. Originally intended for the U.S. market, mxr was still placed on the European market and happily!