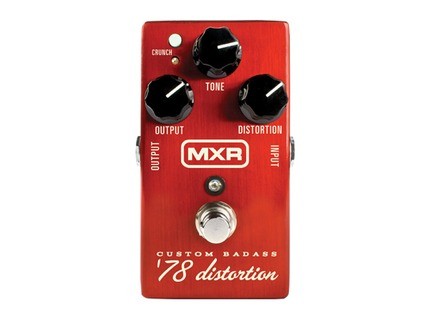 I probably wouldn't have tried this box if my friend didn't insist I did. He was seriously nagging me about it actually. I'm really more of an overdrive guy who stays away from distortions in general but I figured what the heck. The layout is nothing out of the ordinary. Tone volume gain...got it? Also there's a crunch button or something that "boosts the harmonic content." Bleh. Okay.

I tested it with a Peavey Classic 30 and a Tom Anderson Drop Top. I didn't use any other effects. I just wanted to see how it sounded by itself.

Build quality is good. MXR designs are great. Sometimes they miss the mark in the sound department but I rarely have any issues with pedals being noisy or breaking.

At low levels of gain this is actually a fairly transparent distortion which surprised me. It's almost like a boost if you turn it low enough. The pedal starts to impart a voice of its own at higher settings. It's very tight. Think Aerosmith or old Ozzy stuff. Kind of has that razor sharp 80's upper mids thing going on. It will do the 70's stuff too. But overall this is a pretty raunchilly voiced pedal that lives up to the name. It can definitely take a clean amp and send it into the upper stratosphere.

The crunch button I find to be really useless. It makes the pedal sound worse overall, and adds to the already questionably versatile voicing. Sure it's great if you want to rock 80's style, but this pedal is basically a one or two trick pony.

I can say that it seems like another solid MXR pedal, but unless you are in a ZZ Top cover band, I can't see you using this pedal for much else. It's okay as a boost, and it does have a nice range of usable gain, but like I said the voicing limits what you can do with it. Would have been nice for MXR to include a voice knob. I feel like I'm being hard on it because I don't like what it does. But for the price I would like something more flexible. It's just not for me I guess.

MXR M78 Custom Badass '78 Distortion
5
This pedal was demoed at Namm this year and it will be a huge hit for MXR. It is modeled off that hot rodded tone coming from 1978. Well they don't go into too much detail why they picked that year but I have a theory. One of the most influential guitarists and band came out that year running with the devil.

Let me start by saying I'm not a huge distortion box guy. I like to get my grit from the amp overdriving the tubes. So when I heard this pedal I was pleasantly surprised at how natural sounding this pedal was to a real tube screaming high gain amp. This pedal is about to make a huge impact on the overdrive pedal scene.

Really simple operation with only three controls knobs and a crunch mini button that beefs up the tone. Like most distortion boxes it has an Output, Tone, and Distortion controls. The Output will control your volume level for the unit, while the tone will control how bright and how dark the overall tone will get much like a tone control on a guitar, and then the distortion knob will give you the gain you desire. The mini button called Crunch will basically beef up the tone and add rich thick harmonics to the tone.

In my opinion most distortion boxes sound like garbage. And there are even MXR pedals that sound like garbage and I'm a huge MXR fan. This thing really shine in the lead category. The lead are smooth and silky while giving a huge midrange frequency bump that cut through the band mix extremely well. This pedal will be great as a solo boost as well with how well it responds to lead lines. The rhythm is no joke either, in that it has a tight warm gallop to the tone good for mixing in the lead with the rhythm and chugging away.

Use this with a Les Paul or a single coil guitar like a Strat.....it doesn't matter at all. Any operation you through at this pedal sounds great.

Well there is something to this pedal that many other distortion boxes don't have and that is being as authentic as possible. I don't used OD boxes anymore that much unless I find one like this one. This is a great pedal and for the price it is a no brainer. At new they come in at around $80 which is a steal for something that sounds this good.

I would recommend this pedal to any guitar player who needs a solid built OD box and who is on a budget. Even if you're not on a budget this is a great sounding pedal that rivals the best of them out there on the market.

fcalas's review (This content has been automatically translated from French)" Surprising!"

Classic, efficient very perfectly fulfills its role distortion, simple rglages, with a bonus this crunch switch which when Switch-on has a tendency fcheuse blind us. As a, we know that Switch-on is no mistake.

Very good sound, warm, not garish very versatile ranging from blues to hard rock, with a stroke of the distortion knob very intressante, especially the last quarter or 1/5 th that coats completely sound with a level lev very clean. I use a Les Paul, Strat and a tl and I do not need to change depending rglages guitars. To nitpick, I reproach him a breath lightweight.

eulflaike's review (This content has been automatically translated from French)" The distortion that would overdrive .."

No manual on the purchase, but not required, it is a pedal effect ...

This is a distortion pedal a bit special. It has its grain, which is very personal. This is a distortion but, for me, is used in a spirit of "overdrive".
The sound is powerful and bold. It sends strong enough, but at the same time, it drool. The "crunch" switch is a kind of boost but that does not really change the grain or the signal, it just adds a little power.
Gain mini without the "crunch" mode is already more saturated than traditional OD. However, I rather use it in that spirit. Like a OD on steroids.
on the other hand, attention to Tone knob. If you go to the treble, beyond a certain point, mediums come out too, and the sound quality drops, it gets a little too loud. But nothing to do with the side "Bee" some distortion as the Boss MT-2.

This is probably not a pedal to the metal clean and surgical. It is the opposite of that. It is suitable for most well edgy rock or punk. Or, in the spirit of metal productions Ross Robinson 90s (1st album Korn, Soulfly album 1)

To summarize, I would say it is as powerful as a distortion, and Garsse as an overdrive.

I have a few months. This is not the pedal that I use the most because I prefer the mixture OD + saturation of the amp (Orange Jim Root, JCM800), but I like to connect from time to time.

She really has an identity to it, a very special grain.

Paid € 50 in Cygnus' in new condition, I do not regret that choice. But because of this particular grain, I really recommend trying before you buy.

Did you find this review helpful?yesno
»
Read the 13 user reviews on the MXR M78 Custom Badass '78 Distortion »