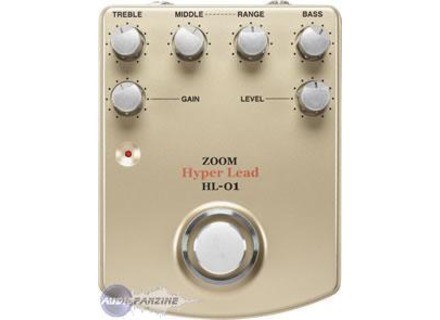 Zoom HL-01 Hyper Lead
5
The Zoom Hyper Lead HL01 is one of the four pedals in Zoom's vastly unknown and underrated line of analog dirt boxes. This one was designed to be like a hard rock distortion, replicating the sound of a classic British stack amp. It has a very basic control set of gain, volume, treble, bass, middle, and range controls. The range control is very cool in that it adjusts the frequency and sweep of your midrange control, so you can adjust it to be more scooped in nature or more boosted in nature. As I said above, it is an analog pedal, so it does sound far more authentic than its digital counterparts. Being that Zoom is a company known for digital products, I was extremely skeptical that this pedal could work... but it does, and it does very well. I liked it so much that I sought out a PD01 Power Drive to run with it in tandem a few years later.

Setting up this pedal can be a little bit tough at first just because the controls need to be dialed in to counteract with one another, but once this happens it's a walk in the park. Most of the controls are fairly straightforward. The biggest one to dial in is the aforementioned "range" control. It really depends on the tone you are after. I find setting it at full gives the most "scooped" sounding tone, and moving it back towards 0 brings more midrange into the equation. I usually went for a fairly neutral tone (IE: setting it around 12 oclock or close to it) and it worked out quite well.

I used it most often with various Yamaha guitars and Yamaha and Laney amplifiers. One of the best hard rock tones I've had was my '92 Yamaha Pacifica with Gibson HBs into the Laney LC15R combo amp with the HL01 set up for a good seventies/eighties rock tone. I would set the Laney up for very mild overdrive (basically a clean tone with some grit when I picked harder) and use the HL01 for all my distorted tones. I used it in various rock, jazz, and blues projects without issue. The great thing about this pedal is that it's quite organic (due to the analog circuitry), and because of this it has a very tubelike tone and feel. When I plugged this pedal in, regardless of the amp, I FELT like I was using a tube amp, and that's a huge plus in the field of dirt boxes to me.

All in all, I feel that this pedal is great, and vastly underrated. I like it a lot, not only for the tone, but for how it feels when I use it. It's very versatile and works well for whichever musical styles I throw at it. I haven't used it or my PD01 as much since getting into more high dollar amp heads but occasionally I press it back into service when I have a pick up gig or a show that requires me using an amp that isn't my own. I want to try the other pedals in the series at some point as well, as I can imagine that they all have the same versatility and tubelike feel as the HL01.

Definitely an awesome pedal, especially for the money... if you get the chance to buy or try one, do it for sure!

Neo_Rock's review (This content has been automatically translated from French)

It takes a little time to find its sound but in the end it's worth it was the sound we are looking for.
the knob is accurate, there are a lot but c a blessing in disguise.'s manual is clear and gives us some example of his nice but not show all the possibilities of the beautiful beast.

(I am the branch all the time, repeating copy with Seymour Duncan SH6 lespaul distortion + marshall all lamps

Purchased 9 months ago, a disto c \ \ Analog \ \, not the digital zoom sai shit like it.
c disto a versatile and I think she's a real metal with metal. I play some music with no problem with metallica and the sound is of the neo acdc aujourdui of any particular thanks goes to knob range,,, are quite a knob and it's not so much decision-head to settle, c clear a minimum of time to find the sound kon wants May in the end it's worth it, Deplus there are very specific.
Small flat, the tuning will be the grave until his final tuning in C, below the sound will be a little runny and the sound is twice as precise set, g unable to get machine head korn but nickel and password Fear Factory and Static-X.
PS: the password palm mute nickel and is well balanced unlike some distortion as boss (without naming names) ki leaves look a sizzling stressful every time the pick (ca kan is even a matter of taste, there are those who love and there are some who like it, this pedal can do it too if you like, ka ago and set up the treble range to donf).

Jumikael's review (This content has been automatically translated from French)" There's better!"

Zoom HL-01 Hyper Lead
3
EDIT: that was my first distortion. I recommend for starting, but even there, a Boss will be a most popular grain, although more limited.

Correct but rather true personality

Avoid: This is not the better distos missing, for the same price or cheaper.