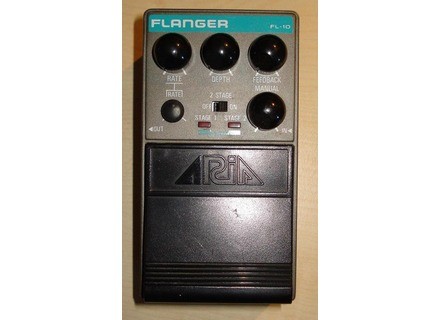 Dual Stage series, such as OD-10 from the same manufacturer: combines two floors of flanger.

Go a little bit ashamed of subjectivity before returning to the heart of the matter: the flanger the most bizarre I&#39;ve ever heard, that&#39;s promising!

Very solid metal box, mine has survived two decades of brutal treatment that I imagine. The design is the best bad taste, though ugly as any, I would not say when its not even look sick though is sensitive souls may well feel inconvenienced ... Be warned!

No manual and no a priori need: one branch, hack it and listen what happens.
The settings are pretty standard for a flanger, nothing revolutionary.

Specificity of this effect: ability to add a 2nd layer on top flange of the first at a different speed by continuous pressure on the footswitch: it supported a blow to trigger the effect and you press again a second time, leaving the foot pressed to activate the second floor. When the pressure is released, it returns to the first level: not obvious right away, it&#39;s subtle, it is necessary to understand the gesture. Many times I bypassed the effect by pressing the second time ... Nothing like it to look like a ball! So one good ball to work and avoid platform boots, sneakers and other creperie soles!

The pots are of a type at least confusing: species of small black balls with cutaway. It&#39;s not very smart: more than 10cm away, impossible to see the setting values ​​... sucks but hey I do not change, I too afraid to distort the look of this pedal awful, which also look the part called pots with happiness.

A very good point: access to the battery compartment (under the footswitch, as the Boss) is done with a small latch just push it. Very accessible and super easy, nothing to unscrew. I am really surprised that no manufacturer have taken effect this process ...

The sound ... there is a very big surprise.

For comparison, the knobs have a race setting and sensitivity much wider than the BF-2 and yield a huge range of sounds: the classic flanger, the very metal in the heat, going up &#39;sounds the most crossed. With the feedback thoroughly, the pedal part in a pretty self-oscillation, which hold the frequency with the manual. Placed before an analog delay type MemoryMan EHX Deluxe, it explodes into opportunities for small sounds bizarre, swirling ground fog and other audio ... to create atmospheres and tense calm is nickel ... If you prefer, we also get easily the siren cops (well it is not used on all tracks, but hey, we can always do with Pinball neighbors ...).

I do not know if the venerable age of my pedal is for anything but the ends of the phases of oscillations are marked by a subtle pitch to give a feeling of slight vibrato or more supported in terms of depth and the selected speed ... very special, very alive, but very special ... next, a BF-2 Boss from home sounds really too straight, cold, dry, synthetic ... (NB: I have nothing against the BF-2 home Bosse, which I really like the sound)

Well I almost forgot metals but the real bonus of this effect: the second floor flange. It is superimposed on the first effect of flange and flange allows you to mix a short, very liquid, a very slow, like waves or plane, or vice versa. This second level comes forward in terms of sound, and I think he sounds drier than the first (less feedback or resonance) ... ideal for many of arpeggios in a rhythm dripping flatter.

In summary, I would describe the sound of "organic" and "unpredictable" and some settings, you can get sounds entirely made dissonant and ugly, kind of irritating rubbing two rough pieces of metal. FL-10 can also sound very ugly, it&#39;s your choice ... Playing the guitar and touch are also factors to manage in the sound of this ...

In short, a pedal that I had to learn to tame but both helped me grow in my game and open my ears.

Now, the inevitable sequence "yes, but ...": not true-bypass, color the sound, rather lo-fi, noise clearly discernible, especially with the manual to 0 (flange centered on low frequencies). .. But I, all that, I do not care, it&#39;s still music, I love and it reminds me of the sound of the sea!

Great effect! For all its faults, this flanger outclasses his personality my BF-2 Boss from home and ended up replacing it on my pedalboard. It may be wise to separate the looper to its problems of failed bypass.

For me the most special and well flangers an instrument by itself, a sort of mini keyboards ... It gives me some good hard time but I can learn from other sounds flangers never imagine even.

Rare piece judging by the few results that give a web search. Bought used for 40 €, thinking that yeah good for that price, I risked nothing, I could always tinker with the wreck ... well, no, slap and nice surprise. Too happy!

My advice: if you come across an opportunity, do not hesitate one second but no more than € 50 ... beyond, it&#39;s just the flight!