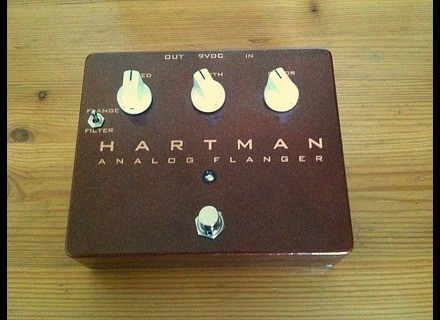 walkeur's review (This content has been automatically translated from French)" Annoying"

Hartman Electronics Analog Flanger
4
"The Hartman Analog Flanger is a meticulous recreation of one of the early greats EH Electric Mistress (not the Deluxe, not the Stereo, the original). The Hartman Achieves vivid transparent sounding goal flange and static-filter effects and combined with heavy em- duty true-bypass switching, LED indicator, and the Ability to run off of a single 9V battery.

Incorporating critical components to Reproduce faithfully the path of the original signal, the tighter the tolerances Hartman exploits and lower noise floor of modern components for clarity and superior sonic fidelity. Great care taken to WAS ESTABLISH a power supply and signal layout traces the problems with That minimize crosstalk, clock-noise, and oscillator bleed-thru That plagued Many originals.

The Hartman Analog Flanger eliminates completely Call "volume-drop" issues inherent in the original non true-bypass design. The Flange / Filter (effect "on") signal is Exactly as loud as the true-bypass signal. "

Basically, this is a recreation of the very first Electro Harmonix Electric Mistress, that we hear on all songs in the late 70s and early 80s, Gilmour, Andy Summers (the Police), Prince ... you end up on the live album "the wall", or "purple rain" ...

I put no great note.
1 - impossible to have its own if this product does not have a power supply to herself, and then as an isolated section on good PSU (type voodoo lab)
2 - it's a brothel to pay to have a beautiful sound, while there are only three buttons
But should see more of my opinion ...

Once it is properly fed and properly adjusted, this pedal is ... fantastic.
Sound quality, no breath, it feels like the early 80s. INIMITABLE flanger sound.
For purists, they lack bass, is a weird thing with this sound, but it is precisely this which gives its EC musicality so special.
Only, with distortion, with delay, with compressor, you can put anything we want with it sounds.

I've had almost a year.
Before that I was home twister2 Trex. Completly different, super clean, but soulless.
Hartman This is a new pedal that expensive, and besides it is not easy to find, but what a sound!

The 2 points are missing for the management of rotten food!