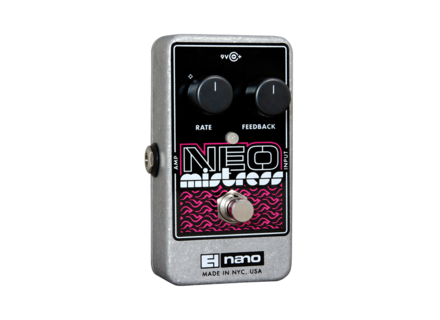 Neo Mistress, Flanger for Guitar from Electro-Harmonix in the Mistress series.

Electro-Harmonix Neo Mistress
3
This is an effects pedal "flanger" type. It is analog and true bypass, two brownie points for me. A battery is supplied with the case, it's not bad.

It is very easy to use: one button spleen and feedback. It has two modes: a "filter" mode (spleen before 11am) and a conventional mode of modulation (spleen after 11h). After several tests, we understand very quickly how it works. The two modes allow you to vary the sound quite effectively.

I just bought it after a convincing test in store. Back home, it was less so. There are the failings of the pedals "general public", ie a significant noise breath, frequencies a little hot and a pretty blatant lack of precision.

I bought it to put a flanger on some solos. The breath is a problem for me because, with a boost in addition, it blows too much for my taste.

Considering the price, it can be said that it's okay if this effect is used infrequently or for a tight budget.

Being accustomed to the pedals like "boutique", it is not necessarily the same.

I'm still testing the high volume repetition. See next, but there is a good chance that I resell. I will point me to a Ibanez FL-9 or even better, Maxon, but this is obviously not the same price.

Other Electro-Harmonix flangers for Guitar