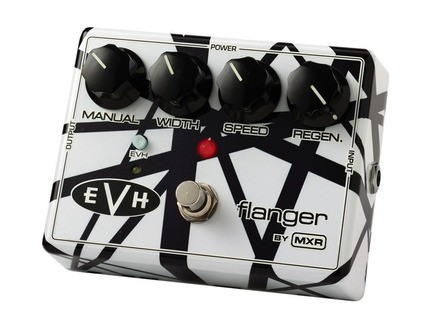 MXR EVH117 Flanger
4
Eddie Van Halen was famous for his usage of the flanger in certain songs. He basically made that "jet plane" sound famous. This is really the exact same thing as the normal MXR 117, but this has the Eddie stripes on it, and it also has a button that defaults the tone stack to Eddie's favorite settings on the pedal.

The pedal is very easy to use in that all the knobs are laid out nicely and are clearly labeled. It has an LED indicator to tell you when it's on or off, which is a huge plus if you're on a dark stage and were in a rush to set up your gear. The manual is gives good detail as to what everything does and gives some recommended settings. The most peculiar thing about this is that it has a button that defaults everything to Eddie's favorite setting. Why they chose to add this, I have no clue. It's pretty useless, in my opinion.

Aside from the useless button, this pedal delivers a great flange sound. The pedal excels at that jet plane sound that he made famous in his songs, but it can do much more than that. This pedal can also deliver some very subtle flanging sounds that are almost unbeatable when compared to other pedals on the market. It's fairly transparent, and the sweep on the knobs is great.

If you're in the market for a flanger, take a look at either this or the BF-2. Both of those pedals are cheap enough to where they won't break the bank like certain boutique flangers, but they sound great. Personally, I prefer the BF-2 simply due to space and not having to run the pedal at 18v. Aside from that, they're actually closer than some people may think.

MXR EVH117 Flanger
5
If you are a fan of Eddie Van Halen and are in need of a solid flanger pedal than this one is for you. In my opinion the best flangers out in the market are made by MXR. This just has that so recognizable EVH graphics on it similar to the guitar in hand on the front cover of Van Halen's first album. This is a wicked pedal and you can get so many different tones from it. I usually keep this pedal in a standard form for "Aint' Talking Bout Love" which I will go into in a little bit. The coolest thing about this pedal which makes it different than the regular MXR flanger in the EVH mini button. This button calls up the tone for the song "Unchained" which is my favorite Van Halen song. So you don't have to scramble around if you have the pedal set one way you then don't have to move 4 controls around to get this tone or even find it.

I'm a huge Van Halen fan so this is a great pedal for me. I like the graphic and the mini button even though I know basically how to get the unchained tone. It makes it quicker if I want to change to that tone. The four buttons really control a huge range of frequencies so you have to play around with it to get what you like. Since all knobs control the parameters in a huge range there are so many variations of that classic MXR flangers tone captured in one box.

The sound quality is superb. Very lush sounding flanger a smooth jet like quality to it. I like to use this coupled with an MXR EVH Phase 90, a Marshall plexi reissues, a Marshall 4x12 with G12H30 Celestion Speakers and a nice super Strat. Followed with a variac and your ready to go. Or you could just buy a Splawn Quickrod and have the EVH tone in spades.

My favorite setting is Manual 11:00, Width 2:00, Speed 11:00, and Regen at 1:00. This setting will get you the Aint Talkin Bout Love tone. This is a good general setting that works for most applications as well. Well if you don't want to push the EVH button or you have a regular MXR flanger and you want to get that Unchained tone here is my setting.

Manual 11:00, Width 2:00, Speed 11:00, Regen -Maxed out. The Regen plays a huge roll in this pedal in my opinion. I think this is the most critical knob that has the most overall change to the tone.

This is a fantastic flanger pedal that will make anyone sing Panama. If you are a fan of the EVH or just need a solid flanger than this is a great pedal for you. I would recommend this to anyone who needs solid flanger pedal that can get lush jet like swishes. The price comes in new at around $190 which is still a nice price for a great pedal.
Did you find this review helpful?yesno
»

ezekielhimself's review (This content has been automatically translated from French)

MXR EVH117 Flanger
5
- This is a flanger, the pedals do dlivre this effect.
- From Technology Fully "analog"
- Absolutely not ditable, turn the knobs and that's it, note the small switch "EVH" which allows for "the sound of Van Halen on the song Unchained" Broadly speaking, we RULES effect flanger and one switch for the VH, I would say this is not n'achte pedals by accident ....
- Connection could not be more simple in / out, a power supply, note that the pedals also works on battery but it takes two!
- Modl not rack or it must be handy.
I put 10 for the pedals while because it is a good quality of trs trs.

- The configuration gnrale is very "simplistic" four knobs "Manual, Widh, Speed, Regen" is turned up to get his wish, note the "little switch EVH evokes prcdement" which has only one function to the sound Van Halen.
- You can not edit the sound with pedals.
- The manual is quite clear, although it is not REALLY good ...

- The ffects, um there is only one, the "flanger" which is my faith trs effective, some'm the rglages can go from one or more lightweight flange psychd lic only BMOL I would say is that we have to choose his or her rglage or EVH, you can not switch from one to another (although it is not very Disabled, it's rare to go from a flange on the other in a same song).
- Mainly with my guitar (Start, tele, les paul) and ca Always Rings recess the effect does not quite Ragit like a guitar the other and that's good!
- Personally I like a lightweight on the flanger sounds clear and a more pronounced effect on saturated or crunch sounds o the choice of this ... I have my flanger pedals with lightweight rglages for my clean sounds and ds is the Global Warming that I pass on how EVH!

- I use it for a few months
- What I like most is the neutral appearance of this effect that respects the grain of the sound of the amp but the guitar is the advantage of analog!
- I tried some other pedals (Boss, Line6, Digitech everything is good not bad overall but I think it's the pedals that I agree the best.
- To be honnte can I find a particularly expensive one in forcment not find anywhere or used by his cot against the quality is indniable!
- Yes, absolutely I would do this choice!

MXR EVH117 Flanger
4
analog pedal, manual adjustments or a switch mode "van halen" which is preset based on that of boys in Eddie's config ..

bah what a pedal, you turn you tested and when it pleases you as you let it.

The overall quality of MXR is still evident and this one is no exception. Very soft and round in terms of sounds, the effect still allows alterations of its sacred origin, sometimes tending toward a slight chorus of phase, up to a heavy wave that sweeps the sound space violently.

This pedal is one of the best current flangers who wants to remain in analog and refuses to pay the exorbitant prices of foot stores that are not necessarily better, but much more expensive. Afterwards, it's a pedal, so obviously the quality / price ratio suffers a bit when you can have an M5 line 6 for the same price or M9 for the price equivalent of two pedals that will do much more and sound just as well.

Other MXR flangers for Guitar