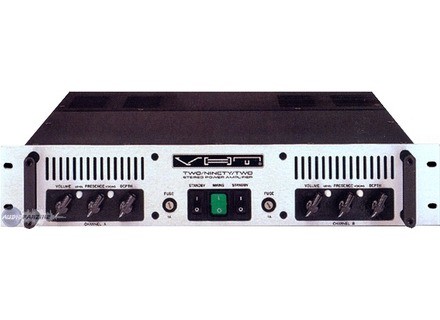 Fryette Amplification Two Ninety Two
5
The Fryette 2/90/2 sports all the features one would hope for in a quality power amp, including

- Stereo all tube power amp pushing 90 watts per side
- 2 KT-88 power tubes per side (6550 compatible as well)
- Master, presence, and depth controls per side
- Voicing and input level switches per side
- A and B input and outputs, with 4, 8, and 16 ohm settings
- Individual standby per side for easy mono operation
- high and low fan speed modes

Plug in your favorite preamp, and go. The dials are very effective over their range, and make fine tuning your sound quite simple. I love how the master knobs react linearly over the range, allowing you to go from quiet to LOUD, and everything in between. Retubing and biasing is quite simple (assuming you know what you’re doing), though expensive with the KT-88s.

Here is where the Fryette makes its mark. This is easily the biggest and meanest sounding power amp I have played. The KT-88 tubes make your common 6L6 or EL-34 sound weak. The sound is clean and aggressive, with headroom for days. The lows punch like you would not believe, and the highs cut and bite amazingly in a live mix. Those that down tune will love the clarity this power amp offers to your rig. The depth knob, which is not found on many other power amps, is GREAT at getting a more 3-D and big sound out of your preamp. Be careful though- the power amp has a more stiff response than others, and required a clean player, as it is definitely less forgiving.

As a little side note, stereo effects are awesome

As you will find many others saying, this is the power amp that all other competitors judge against as the standard. HUGE lows, cuttings highs, and clarity like none other. Though the price tag is high, there is a reason for it, and in my opinion, it is more than worth it. Clean up your playing style, and enjoy some ridiculously good tone!
Did you find this review helpful?yesno
»

deni1's review (This content has been automatically translated from French)

power is phnomnale!
I play in RPET stro in low (2 * 60w) and I still have a standard margin, in other words that can sound to the Stade de France with this amp!
Aesthetics in love!
super fan

VHT is clean and efficient!
no superfluous and unnecessary pots, the pots of depth and prsence really thundering and provide a truly rglage prcis.
fuses in the front are very practical.

When I switched my disto I was shocked! (Vox pam lamps):
dynamic and full of a crazy fishing, the sound is clean trs

I play metal. this amp is well suited to this style of sic I think. Also the amp is transparent and complies with the sounds of pramp. trs clean sounds are good too.

I use it for a week and I'm crazy!
what I love most is the PCHE and dynamic
I like the least: nothing at the moment!

I have no exprience of a standard power amps but if you want an amp with the PCHE, good quality and transparent go for it!

résumé in a pure ball this amp.

ps: thank you to gillou tech audio tube made me discovering VHT!

Missing input jack to switch the mode Voicing,-10db and deep with a MIDI switcher ... as you can do with the Mesa 2:90.

The manual is in two pages: the description of the connectivity and rglages.
The switch LOW POWER / POWER HIGHT low volume has no effect, it must reach a high volume or power 8 HP to be able to feel it! We use the-10db switch for use in low volume with little HP.

It is very easy to explore the possibilities of the amp. Indeed, each rglage is of extreme precision. Each rotation, even low, knobs REALLY works on rendering Audible. Bravo for the rpartition linear through the range of knobs!

A good place for SETTING THE prsence and deep that really an extended field of action. The frquences affected have chosen t as well. Of course, rendering dpendra brand and wear lamps ...
Voicing mode is quality and it goes very easy to sound "soft" sound heavier and brighter.

Used in the clear
The sound is a bit cold over a Mesa 50/50 or 2:90 ... this impression must be due to the fact that Mesa has a darker sound and more dug in than mdium VHT, giving her a slightly more round in Mesa.
Used in the saturated:
It apprcira the precision of a relative's Mesa is fluid, clear and has NIAQUE! : 0)

Most:
- CONTRL prcis deep and adjustable (over a Mesa 2:90, for example ...).
- Trs practice: A standy by channel, adjustable fan speed, low power, single position, being protected by a fuse out ...
- A good trs CONTRL of loudness. We can play without problem low volume.
- KT88 lamps that I got, and have more niaque of clarity as 6L6
- Finishing impcable: components of quality rpart weight perfectly.
- Appropriately priced relative competition (nine 1800euros)
The -:
- Weight: 15.9 kg (on my person electronic PSE, 0))

This amp provides another dimension my System. Note that even when no one extreme with a Difference Mesa 50/50...le VHT is PRCI ...

over-dream's review (This content has been automatically translated from French)

- Connection of the most complete (2-entries for the two-channel, two speaker outputs (with selectable impedance 4, 8 or 16ohms). In other words, it's stereo, with 2 speaker outputs per channel, 4 outputs in the end ... (you can imagine the sound barrier created with 4x12 4 connected to the bottom of 2 90 2: D)

Only gripe, no footswitch (or anything planned for), go from one channel to another if needed ... Well, I quibble of course, and an AB box will do, but hey, it's style to that there is a "default" anyway

- Configuration is very simple, the power amp is very full, but everything remains easy to configure.

- Sound level, his holy kingdom is the metal of course ... The clean sounds are quite right, do not expect a chopper's Fenderien with this power amp, even with a preamp 'properly, it comes out really pretty.

- I use it with a guitar LAG RockLine Metalmaster, equipped with DiMarzio Tone Air easel, very rich in low-and midrange with a big potato. Also used with CORT X11, and soon an ESP EMG81/60. Not really guitars jazzeux, I admit, but here we speak of Poweramp metal par excellence.

- Be careful, it sounds VHT: to love! It is very accurate, very straight and ultra dynamic, love, fans of Marshall & Mesa, p'tetre must look elsewhere for sounds slimy and rough ... With my setup, I get a metal sound very modern, very heavy and accurate, some would say neo-metal ... Yes why not, it could work, although the neo metal with surgical precision

I put 10, with due consideration that VHT is intended for a precise and sharp sound (like in ENGL). For fans of sounds grimey and very runny, Poweramp this is probably not for you, m'enfin, why not after all ...

- I love chirurgicalité the VHT, which affects some cons with the sounds clean, but ... For sounds clean "of metalheads" chorus, no worries eh, for jazzeux, be avoided on the other hand.

- I tried the Marshall and Mesa (the 2:50), not like the masses ... Too poor (for me anyway) and too mushy for what I want. I want to try one a day to see Engl, it must approach the VHT without doubt.

- With experience, I would buy perhaps a second, in case the first broke down live: D
Did you find this review helpful?yesno
»
Read the 5 user reviews on the Fryette Amplification Two Ninety Two »