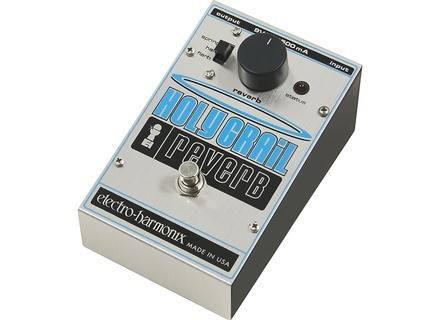 Holy Grail, Reverb for Guitar from Electro-Harmonix in the Holy Grail series.

Electro-Harmonix Holy Grail
4
I paid roughly 100 USD from a guy who'd sold his amp and didn't need it anymore.


It is very easy to use. In addition to that, the design of the unit is very nice and makes you wanna try it out. But of course the best thing about it is the "Reverb" and the "Flerb" effect which is a mix of flanger and reverb that you can get out of it.

The only thing that made me a bit reluctant at the prospect of buying it was the fact that the unit only works with an adapter and no batteries which I think is a shame but the quality of the effect makes you forget about that quite quickly.

The pedal is very light in itself so it is hard to say whether it could withstand a truck driving over it. However, apart from that the construction looks reliable.

Great effect sound. I've been trying out and buying a few reverb pedals before I bought this one and kept always returning them to the store because it wasn't this organic pure sound reverb sound that I was looking for. Everytime I was buying one, the guy at the store told me "See you tomorrow when you return it". Finally, I returned the last one and bought this one which I can promise I am not going to return to anyone anytime soon.

Electro-Harmonix Holy Grail
4
Electro harmonics is one of those companies that buillds some of the best effects pedals in the world. The most common and highly recognizable pedal that they may have has to be a big muff distortion. They do create a lot of cool delay pedals and effects pedals and this is one of them. This is the holy Grail reverb pedal which comes in a pretty decent size box and has only one knob of operation. It doesn't have a small little control on the west side of the changes in the modes but there's not a whole lot of figuring out with this unit.

You basically have one control knob that turns the reverb effect the loudest it can go. There is a mode switch that changes the setting of the unit if you want a different voicing. it has a input and an output and that is about it as far as features go.


The sound of this pedal is a nice sounding reverb tone that will sound good in pretty much any amplifier for guitar rig is a classic vintage style pedal that doesn't have any new or modern features that you see on many newer pedals today. So it doesn't have any USB or midi capabilities but what it does is give you a classical old reverb style that has a single control knob to give you a nice sounding room filling tone.


I'm not sure if Electra harmonics is making these pedals anymore because they really have been pushing their newer digital reverb pedal that comes in a compact small nano box. If you're looking for a newer pedal then I'll probably go with that one but if you're an old-school type of person then you want the vintage electro-harmonics style then this would be the only way to go.
Did you find this review helpful?yesno
»

Electro-Harmonix Holy Grail
4
This is just a plain and simple reverb pedal.
1/4" input and output
9v power jack
one stomp switch
one knob
one switch to change between spring, hall, and flerb settings

Getting a great sound out of the holy grail is very simple. In typical old school EH style you get a simple layout that's meant to just get good sound. No frills. Plug in your cables, get some power to it, twiddle the knobs and you are good to go. I suggest using the supplied adapter since this pedal takes quite a bit of juice to run properly.

The sound of this reverb is excellent and very natural sounding. It is not thin and over processed sounding like some of the others out there and does not muffle or bury your sound unless you want it to. I have never owned a nice spring reverb but this emulation seems to work for people who have owned them. All I know is that it sounds better that my experience with cheaper spring reverb units. The hall sound is what I mainly used because it seems a bit deeper sounding and works better for that huge ambient sound that I like in a reverb. It fills out the sound nicely without that digital sound you get in the boss stomps or other digital emulations. The flerb sound is nice to have too for when you want something a little more wild sounding although it would be hard to work it into a lot of songs because it stands out quite a bit. I think they were going for a flange sound hence the "FL"erb whatever it is I like it and it's very unique.

Another welcome thing is the bypass. No preamps or buffers in this pedal just a nice big true bypass stomp switch. I am not of the crowd that thinks your whole signal chain should be true bypass but I definitely prefer time based effects that might be in your amp's effects loop to be either true bypass or have a very high quality buffer. Electro Harmonix is not exactly known for quality buffers so I think it was a good call going for a true bypass on this box.

For me the sound of a pedal is always the number one priority. I can usually work around any design hangups if the end sound is worth it. I would say the Holy grail is great for most reverb requirements. It is not very tweakable but the one knob design provides a pretty wide variety of tones. The knob is also big enough to move with your foot during live performances. That is something I love about the huge boxes Electro harmonix likes to use.

The one downside to this pedal is there seems to be a bit of quality control problem and an intermittent noise issue. I have owned three of these and one had a high pitch whining that was always there while the others it was intermittent or not there at all. The pedal also seems to be picky about power supplies and placement. I had mixed results using a pedal power II so I usually just used the supplied wall wart and never ran any boosts/od/etc.. after it.

If you get one that does not have noise issues you will love the sound.
Did you find this review helpful?yesno
»

Electro-Harmonix Holy Grail
5
This is a unique analog reverb pedal. It can't be edited through a PC or Mac, and is not controllable by MIDI. It isn't rackable, as it is a guitar pedal. It has a 1/4" input and a 1/4" output, and can be powered with a power supply that comes with it, as well as with a battery.

The editing on this box couldn't be easier. It has one knob and a switch with three modes. The different modes are spring reverb, which is similar (almost identical) to the reverb found in old-school guitar amps. The next setting, hall, is pretty obvious. It sounds like you are playing in a room with lots of natural reverb. The third setting is called "flurb" and it stands for a mixture of flanger and reverb, which is a good way of describing the effect.

I use this primarily with my Strat and Twin combo, since I use that most. I've tried it with an SG as well, and I liked that too. In general, this pedal will probably work the same with most guitars, and will possibly work well with other instruments like bass, keys, and vocals too. The quality of the sound is pretty awesome. It doesn't color the sound too hard from what was originally plugged it. It's generally pretty transparent. I thought that only having the one knob would be kind of limiting, as there isn't a whole lot of control to be found, but I actually kind of liked it after awhile. The fact is, the pedal is only capable of producing GREAT tones. It just depends on how much reverb you want there to be. I think that the spring and hall settings are way better than the "flurb" setting, but that's mainly because I am not a huge fan of the flanger effect in general. That being said, the spring setting is almost exactly like the reverb on my twin amp, except possibly clearer. I was quite a fan of it, really. The hall reverb is also quite natural. I like the sound of really reverberant rooms in general, but it's not always possible to record parts in rooms like that. This is when pedals like this come in handy. It seems like each value on the knob is like a different tone, good for almost every purpose.

The only thing I disliked about this pedal was the "flurb" setting. I had no use for it. Otherwise, it sounded great. Even though its marketed as being great for recording, I don't know if this is necessarily true, as the reverb does not have many ways to affect the sound. It might be difficult to manage within the context of recording a song. I think that this is a perfect pedal if you want reverb on your guitar during a live show. It might work with vocals for live shows, as well. I think that this is a great pedal, which isn't surprising since this company has always made great pedals.
Did you find this review helpful?yesno
»
Read the 22 user reviews on the Electro-Harmonix Holy Grail »

Published on 04/13/09
Electro-Harmonix recently announced the release of the Holy Grail reverb in a die-cast chassis.

Other Electro-Harmonix reverbs for Guitar