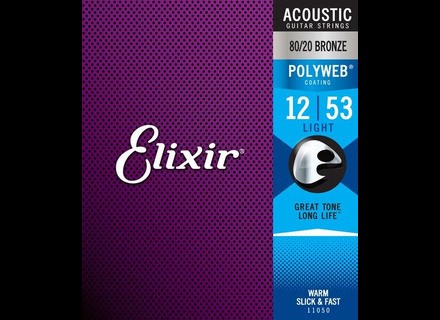 Elixir Strings Polyweb Coating 80/20 Bronze Acoustic
5
I have played the guitar for over 15 years. I have always been dedicated to keep fresh strings on my guitars (acoustic and electric) because I could hear that it makes a big difference in tone. Plus, who likes to play on strings with dirt and grime all over them? I have always been skeptical of paying the extra money for a $10 set of strings compared to a $5 set of strings. I figured, as long as I kept them fresh, that is what matters most. I had played Martin SP lights, and Ernie Ball slinky strings as long as I have have playing the guitar. Recently I tried out a set of Elixir strings on my acoustic guitar. I thought they sounded pretty good, and played really well. Then I switched back to the Martin SPs. It sounded like my guitar had lost all its tone. I was so surprised that the Martin SPs sounded dark and dull even with a brand new set of strings on the guitar. It was a shocking experience, and I couldn't believe that I had just been playing the Martin strings for so long and never tried anything else. Unfortunately for my wallet, I am going to switch to Elixirs. It is too bad they cost twice as much money, but the difference in tone was too much not to make the switch. I suppose I will just try not to switch my strings as often. But I will definitely put a new set on any time I am doing to recording, it makes a huge difference. Many times you can find retailers that carry these strings in "multi-set" packs so that you can buy two and get one free, or buy 10 sets at a discounted price. Assuming that you love the strings, and wouldn't want to try a different brand, buying in bulk is a good way to save a few extra bucks on these 'luxury' strings.
Did you find this review helpful?yesno
»

Elixir Strings Polyweb Coating 80/20 Bronze Acoustic
5
Since I do not have a lot of time for my personal guitars nowadays I have decided to switch them out for the longer lasting Elixir coated strings. Not knowing which style to choose I decided to test out both the Nanowebs and the Polywebs. The Polywebs are the original style of coated strings from Elixir. They are like if you coated a finished string where as the Nanowebs are if you coated the individual strands in a string then wrapped it like a normal string. The Polywebs certainly feel like a coated string. They have a very smooth feeling and this is part of what helps them last so much longer. What kills strings is the gunk and dirt that gets caught up in the ridges of the strings. These turn your strings black and kill the tone. When the whole string is coated smooth there is no where for the gunk to build up. The more substantial coating on these strings is what makes them feel different from regular strings. They feel a bit smoother and this cuts down on string noise a lot but the feel being different can throw off some players use to normal strings. The Nanowebs last 3 to 4 times longer than regular strings while it seems these original style Polywebs can last like 5 to 6. The main problem with these strings is when you play them a lot the coating starts to fail in the picking area. Once the coating fails and frays off it no longer has the protection in that spot against the dirt and it is like any other string. It takes a while to get to this point so it is kinda like when this happens then you have the life of a normal string left in that set of strings. These strings cost about twice as much as a regular set of strings but they last so much longer you end up saving money in the long run if you change your strings regularly.
Did you find this review helpful?yesno
»

Elixir Strings Polyweb Coating 80/20 Bronze Acoustic
5
The Elixir Strings PolyWeb 10-47 are a set of acoustic guitar strings, with the gauge mentioned in the title. The PolyWeb set of strings comes in any gauge sizes, but I prefer having 10’s on my acoustic. I’ve used these PolyWeb strings primarily on my Martin and Guild acoustic guitars, but I don’t see why these wouldn’t be suitable on any acoustic guitar. I don’t really know what the difference is between the PolyWeb series of strings and the NanoWeb strings, as I’ve only used the PolyWebs. The Elixir Strings PolyWeb 10-47’s have an overall bright and vibrant sound, perfect for acoustic guitars where you’d want this type of sound rather than something a bit darker. The feel of the strings is about average, as I don’t notice too much of a difference between these and other sets of acoustic guitar strings. The PolyWeb coating on these strings definitely does allow them to last a good amount of time, as I’ve noticed that these definitely stay fresher on my guitar than most other sets of acoustic guitar strings that I’ve used. I guess that’s what the PolyWeb coating will do for you over anything else. The price of these strings compares pretty well to other sets of strings, as they’re definitely the same ball park as most sets of strings out there. Price shouldn’t be a main factor with strings, as comfort and sound should be the main priorities, as strings in general are cheap enough that it doesn’t really matter. Many sets of strings will sound and feel similar, so the fact that these strings seem to last a bit longer is definitely a main selling point in my opinion. I’d definitely encourage those who play a lot of acoustic guitar to give the Elixir Strings PolyWeb 10-47’s a shot.
Did you find this review helpful?yesno
»

Elixir Strings Polyweb Coating 80/20 Bronze Acoustic
5
I have been using the Elixir Polyweb strings for about four years now. At first I was very skeptical with this concept and I thought I would rather change my strings a bit more often than to have less of a good sound.
But then I bought a Taylor and got converted (all Talyor guitars are equipped with Elixir strings). It is true that these strings are not quite as bright as brand new d'Addario strings (or others). The problem is just that the brightness doesn't stay for long. The Elixir strings on the other hand retain their sound wonderfully over many hours of playing. The Nanoweb series does sound a little better but I still prefer the Polyweb as it makes the strings feel a bit slicker. It also helps to minimze string noises during recording.
I use it on my Godin MultiAc Duet and they can really take a beating.
I don't like that after a while you get little flakes hanging from your strings. This does not impact the sound but still looks a little cheap. Another problem is that most stores don't carry single Elixir strings. So if one ever breaks you're usually stuck with buying the whole pack...and cheap they are not.
I also like DR strings but they are a hassle to get in Switzerland.
Did you find this review helpful?yesno
»
Read the 7 user reviews on the Elixir Strings Polyweb Coating 80/20 Bronze Acoustic »