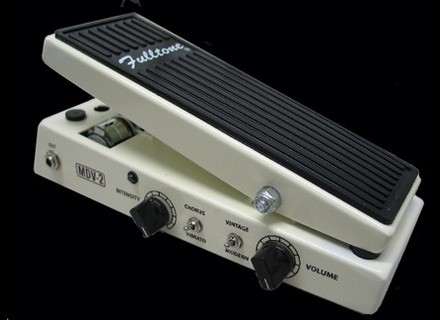 phooey's review (This content has been automatically translated from French)" The ultimate Univibe?"

Fulltone DejáVibe MDV-2
5
This effect Univibe, which simulates a Leslie, of that I think is a shuffled chorus / phaser.
It can also develop vibrato, the effect is quite different and interesting too.

I would say from analog given the size of the pedals but I do not remember actually. The important thing is that a ring.

Simple enough Settings, and each knob has a toggle utility.
A knob to the intensity rgler one for volume, both are sensitive and very useful.

The two switches are toggles unvibe select the effect or for a vibrato, and select between "vintage" or "modern" for the other.
They are not for the COD and each mode's usefulness depending on what one seeks.

The format of expression pedals to accentuate or attnuer speed, and although not essential, it's pretty useful if you want to modulate or adjust the frquence with the tempo.

So powerful questions I tried a few, and I heard others have to say that in the Fulltone outperforms much.
In clean, the sound is excellent, there are still many Dfine, unlike many other Univibe, and it is a rgal to play with.

For use in saturated dlicat is a little more.
I mean the dpart Ds, t I just use on the OD channel. I found the sound a little ... "diminished". Less beautiful and enjoyable than the clean.
In crunch on the other hand, is a well-trs.

I was chatting with a friend guitarist connoisseur, and he told me that for the distortion, the Voodoo Lab Micro Vibe silent much better.
Indeed, with her vintage strat his Benrod amp distortion Fulltone OCD and he drew apocalyptic sounds absolutely wonderful!
Organic furious sounds of doom, quite different than what I had heard. Well, at the same time, he never puts three slices of distortion.
If an alien (the film of the same name) played the guitar, has surely would sound like a.
Sduit, I bought it too.
Except that ...
In clean, nothing to say, the Fulltone is suprieure.
on the other hand, in distortion, impossible to find good sound, a sound bunch and nothing that rage alien who had bewitched.
In short, illico made to the store and back the good old mini vibe that already j'apprcie more of the shot.

Ultimately, it may be simply that this effect does not agree with a lot of grain. Likewise his rendering seems better with single coil pickups.

I have some pedals but the effect now has Intgr my pedalboard of Manir constant even if you have to use this sparingly because he really filled the space.
For a group with two scratch or with a keyboard, be careful not to walk on.

I've had one or two years, I can not remember.

Clean sound is beautiful, I have not encountered even if the best is probably a lie.

The small problem is that I use distortion is average but it can be quite CHARACTERISTICS gnral this effect.

The report price is difficult to assess quality, it should be compared with similar effects pedals sold in the same price.
Certainly it is better than many others but it is also sold two times more.

I am satisfied and I would do almost the same choice as' the reflection, I would choose may be the mini version Premire dja vibe that does not possde expression pedals but may be more friendly board pedals.
But only because I did not modulate the rotation along the way.

Other Fulltone tremolos/Vibratos for Guitar