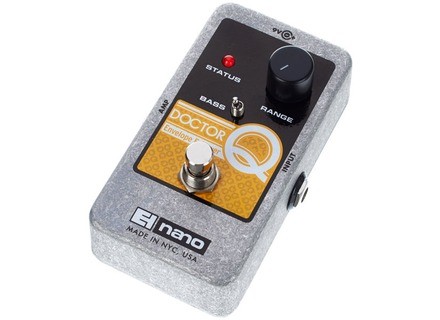 diamond60's review (This content has been automatically translated from French)" Personality!"

Electro-Harmonix Doctor Q Nano
4
This is a "Envelope Filter" analog Nano version of the Doctor-Q EHX dating back 70 years.
It reacts to the attack of the game and created a wah effect types.
Input / Output jack Standard | Power 9V DC Standard.
The case is sturdy, it is standard EHX Nano size, it does not take up much space in the Pedalboard.

A knob "Range" is used to define the frequency range over which the effect is. Depending on the setting thereof, the output volume of the instrument and the attack of the game (more or less energetic) type, produce different Wah pedal.

A "Bass Switch" increases the frequency range in which the effect is in the bass. Knowing that by default, the effect triggers the medium and treble.

The "Footswitch" allows engagement or cutting effect. Knowing that it's true bypass.

Seniority as the underlying meaning, the analog wah, is very typical "Old-School 70's" and little versatile. Either love, which is my case, there is found little interest.

I use it with a bass. Normally, it does not fire if you play on low notes, but opening the pedal, you reach a small "trimpot" that can be turned with a small screwdriver electrician. This helps to push even sensitivity in the bass.
So, no problemo, the sound is nickel even playing with a bass.

I've had a little less than a year.
I wished an analog thing simple, typed "old-school" is perfect.
I had just before, and for a long time, a BOSS AW-3, super versatile and very good, but over time, I preferred the past to analogue and simple.
The quality / price ratio is very good.
With experience, I probably will remake this choice, although I will probably soon to the Micro Q-Tron EHX

Electro-Harmonix Doctor Q Nano
4
Indeed analog series of mignature EHX ... it matches the Doctor Q.
The settings are the same, a knob that sets the position of the Wha and a selector to "boost" the bass.
Alim in standard Boss type 9V.
CAN NOT BE LESS

It was a sound, ONE ...
We choose the position of the end, I left the selection board to boost the bass on all the time ...
S'aurait been a little more complete ...

I bought this for use on a few tracks. it's pretty much what I expected from an Envelope Filter.
I find the sound really nice rhythm on clean (and not just for the funk!) Ca clean spice up a bland (but I is not clean my fade ...)
In distortion, it's really cool, I bought it for that, have a different sound on a lead or a soli ... is successful, I do not ask him any more ...

I just receive it.
No special really unpleasant for me.
This is an effect that has personality (maybe not as much as the original but I can not speak, I have not tried)
I tried this because I needed an Envelope Filter EHX and I like in general, I had not tried or compared to potential competitors.

The price is really attractive (to a factor of purchase), as in the whole series Nano brand.
Did you find this review helpful?yesno
»

thebaide's review (This content has been automatically translated from French)

Use could not be more simple, we RULES the intensity of the effect DSIR and voila ...

For my use (I play funk, blues, rock) is not bad! it is a good alternative to the wah wah. it can range from a mild effect trs has a kind of psychedelic AOOOONNN a wish.
on the other hand, it is essential to settle the pedals, let me explain:
IN the pedals, there is a tickle ptite screw with a screwdriver end trs: ca can adjust the frequency and thus to avoid an effect too garish and thus avoid feedback ...
for casseroles funk is happiness, for rhythmic RULES general is not bad ... pretty hard to use in solo against (yeah if the envelope is closed in the open solo, was a trs his tuft ...)
the switch must remain Inrush bass, even for scratch, it makes the effect more friendly.

Ptite PDAL fun, expressive trs, now if I will again c'tait a micro Qtron, which offers more than rglages!

Guilll's review (This content has been automatically translated from French)

Electro-Harmonix Doctor Q Nano
3
This is an Envelope Follower, and thus has, uh, you know, what a enveloppefollowe. In fact it is not empty dcrire is a kind of auto-wah and more rapid and slamming to make sounds or funky bizarrodes. And unlike an auto-wah, it is a priori impossible to do the same thing with a normal wah.

Technolgie analog pedals trs simple input / output jack, on / off switch, a knob to select the frquence on which the effect works, and a mini-switch for added bass.

The pedals are very small, plutt cool visually (if you like Electro-Harmonix and brushed aluminum trs and apparently solid.

Finally, food is the traditional Manir (phew), but to change the battery must dvisser 4 screws and open the two pedals in! Not super convenient, has fortunately not often happen.

The edition of the sounds is very simple:

* The targets frquence knob on the end, and the intensity of the same shot. At worst there is almost no audible effect, the sharper it is Submitted.

* The miniswitch adds bass or not. In practice, with my guitar mode "without bass" is almost unusable, due to volume decrease trs.

These are exactly the same as Doctor Q rglages classic, which has also disappeared from the catalog EH. I dduis the two pedals should be more or less identical.

The first I trsdu t: trs little effect Submitted silent, even putting a booster before, and produced especially acute when I was pushing very sibilant s high ropes.

Basically it is a component site of the indoor pedals, adjustable with a screwdriver and to target frquences concerned by the effect.

Aprsrglage (very easy couraging), the pedals are transfigured! We get funky sound (with the rhythmic rglage using the knob) or psychdliques (on solo). In addition the effect of the intensity Ragit mdiator game, allowing to get used to vary the attack and acqurir a game more expressive.

For cons, I still have not understood the intrt the switch "bass" is disabled when the volume is divided by two, in fact, easily, and starts blowing PDAL horribly! And it does not seem that this is a malfunction of my own. Well this is serious: you touch it and everything goes well.

In fact I ended up replacing it with the above MODEL: The Micro Q-Tron. Submitted same effect but with far more rglages possible.

It is my opinion a PDAL trs cool, not great but does its job without rclamer rglages hours. And besides it is really not CHRE ... But the little rglages possible and the low "power" of the effect is a little frustrating.

On the other hand, the NCESS rgler to get a good sound with his guitar is hard to admit I find, especially since it is mentioned nowhere in the instructions! If one does not know you can pass this cot compltement pedals, and it is a pity because it is perfect for small grants. It will give her a dish but if you just ...

For cons, I still wonder about the usefulness of the switch "bass" ...

Did you find this review helpful?yesno
»
Read the 5 user reviews on the Electro-Harmonix Doctor Q Nano »