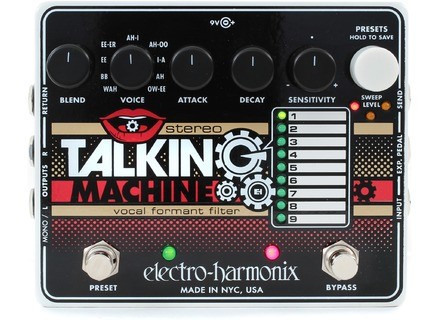 - Made in USA
- Voice Filter 7 modes
- Methods and Baseballs Wah
- Sensitivity adjustable filter sweep&#39;&#39; up&#39;&#39; or&#39;&#39; down&#39;&#39;
- The attack and decay knobs control the speed of the envelope when scanning the filter
- The external effects loop lets you place an effect on the filter without changing the dynamics of the envelope
- 9 presets
- Housing and robust switches
- Power supplied 9v

Programmable filter to generate vowels according to the dynamics of the game, you can choose from nine different sounds (Ooh Aah through to the Wah). It is also allows stereo and plug in an external effects loop. An expression pedal can also be connected to control the filter sweep. Finally, it has 9 slots to save your favorite sounds.

To summarize, this is a pedal modulation (analog like any EHX?) That acts as an auto-wah on different formants giving the guitar illustion pronounces the vowels according to the selected mode (complete with a wah and true the famous baseballs.

Oh yes size precision that is not mentioned in these data sheets: it loads as a fuzz and an lfo! representing huge potential of this pedal.

A jack in, two out jack (L / mono - r), send a return for a loop and an expression pedal input that I highly recommend it.
No noon (which would have been nice to sync the LFO

Intuitive at first sight, except to access the fuzz and WaG, you must know the manip clearly explained in the manual in English, but nothing on the pedal itself is no indication these goodies (I think those who buy secondhand without manual ...)
Otherwise simple configuration, manual clear if mastering some English, easy editing. That&#39;s good!

The settings are well thought out: attack decay for accuracy, sensitivity: a game-haired, the mix to go light or background.

Personally I have not been interested in the effects loop, but hey it must be me ... In any case it is better to place a distortion pedal before (or after) it!

The expression pedal allows more control of the filter is almost mandatory to use as a real wah.

So! Here it is completely subjective, BUT I defy anyone not to find more of this nice friendly (except maybe the fundamentalists finger picking Amish, hating everything electric guitar ....)
It is certain that it is not indispensable, that very distinctive, it is not happening everywhere, but the variety of filters, their quality added to the possibilities offered by the fuzz and the lfo, are that it Max takes a pleasure in doing his guitar sing. Ideal for improvisation and in my opinion propisce to all styles. For the aprèges Lfo is very nice (just need to find the right tempo!)

I use it with my Mustang on a peavey classic 30, and it never leaves my pedal board, I&#39;m hooked (and I sometimes have to force myself to bypass me to refocus on what I play so it can make me go in solo with delusions ...) The internal fuzz is good and gives body to the effect, but I like to put before my boss mt2, for a disto colder and play on the equalizer to have sounds more "modern".

Initially it may be that this is a pedal that goes a little kitsch to be funny 5 minutes and ring back soon ... Nope!
Different formants, can mix effect, the variable attack decay, the sensitivity of the dynamics, make it a versatile pedal, some methods work better on some than others equalization, are more subtle.
The wah and baseballs do their job wah and baseballs.

To say a little trouble, there is a small loss of level when switched lfo.

Since 8 months I have déccroché, it is inspiring to me.
Before buying it I&#39;ve watched a lot of videos on youtube, they have convinced me (it makes me think I had said on the forum that I would make one ...)
If you procrastinate after seeing the demos, something like "I like good but is it reasonable ...", I can only encourage you to unreason, for me it is a real favorite exhales ( and it is contagious).
I have not had the pedal that I can compare it. A wah? well it&#39;s much more than that. I think this is an effect that may also not be to everyone&#39;s taste, for quality is against the appointment. EHX we like it or not, but for the price nothing wrong compared to many other "big" brands.
In fact I could go on much longer ... but I prefer to let my guitar do: p

What I love most ... the overall concept and sound quality on arrival! I do not know if it&#39;s 100% analog annalogique but it sounds!
The least? go: no midi in and lower the level Lfo (good but frankly it&#39;s nothing)

I think I have no need of saying that I have no regrets and that if it was redone.

25 of 26 people found this review helpful

Published on 01/19/11
Electro-Harmonix unveils the new Stereo Talking Machine, Vocal Formant Filter, designed to re-create the characteristics of vowels and reshape your instrument’s signal to mimic them.